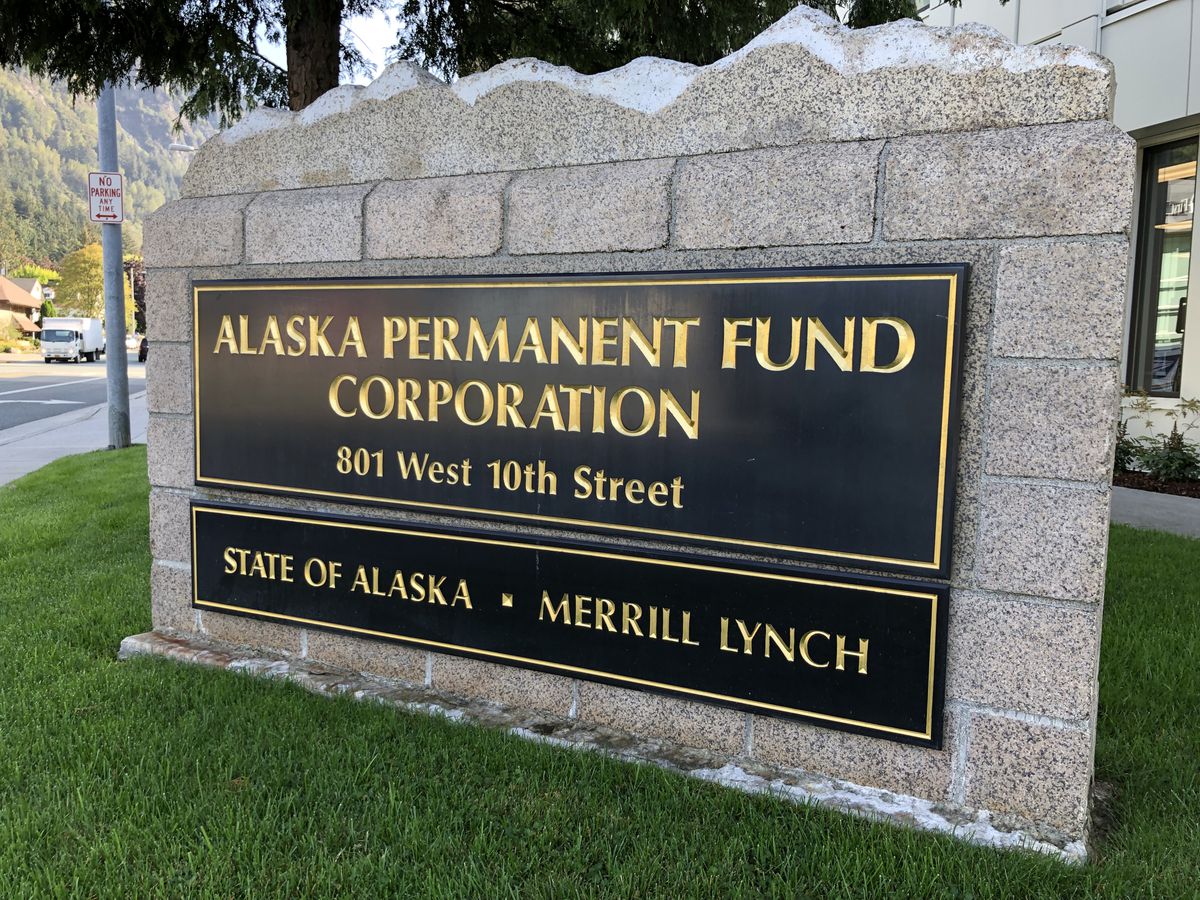 The offices of the Alaska Permanent Fund Corporation in Juneau. (ADN archive)

The offices of the Alaska Permanent Fund Corporation in Juneau. (ADN archive)

Despite a $2.7 billion transfer to the state treasury, the Alaska Permanent Fund earned enough from its investments to grow by $1.4 billion, or 2%, during the just-ended state fiscal year. As of June 30, the fund stood at $66.3 billion, up from $64.9 billion on the same date in 2018.

Under a system approved in 2018 by the Alaska Legislature, the Permanent Fund is now more important to the state budget than the oil industry and all other taxes combined. The $2.7 billion was spent on both dividends and state services: $1 billion was spent on last year’s $1,600 dividend and the remaining $1.7 billion paid for services used by Alaskans.

The year-end figures, discussed Thursday in a committee meeting of the Permanent Fund Corp.’s board of trustees, show that the system worked as intended during its inaugural year. The fund earned 6.32% on its investments and transferred out 4.3%, leaving a small amount for growth. The figures will be made final at the corporation’s annual meeting later this month.

“I think it was a really solid year,” said Bruce Tangeman, commissioner of the Alaska Department of Revenue and one of the corporation’s trustees.

“We kept up and added to the earnings reserve account,” said Angela Rodell, executive director of the corporation.

The Permanent Fund consists of two main accounts: The corpus, which is constitutionally protected and cannot be spent without a statewide vote, and the earnings reserve, which can be spent.

Until 2018, there were no limits on how much could be spent from the earnings reserve. In that year, the Legislature approved — and then-Gov. Bill Walker signed — Senate Bill 26, which calls for a regular transfer of 5.25% of the fund’s average value to the state treasury.

The average is calculated by looking back six years, dropping the most recent year, then averaging the remaining five. As long as the fund’s investments are increasing in value, that means the transfer will always be less than the 5.25% limit. The limit is scheduled to decline to 5% beginning with fiscal year 2022, which starts July 1 that year.

“There’s going to be really, really good years and then there will be some clunker years as well, so hopefully there’s a lot more big years than clunker years,” Tangeman said.

In the current fiscal year, which began July 1, the transfer will be $2.9 billion. The figure is higher because the fund is larger.

The transfer from the Permanent Fund can be used for any purpose, and this year’s budget debates revolved around how much of the transfer to use for dividends and how much to use for services. There also was extensive debate about whether the Legislature should simply break the new limit in order to pay both a traditional Permanent Fund dividend and cover the costs of state services.

In the end, the Legislature decided to follow the SB 26 limit and instead break from the traditional dividend formula in law, something allowed by the constitution and confirmed in a 2017 ruling by the Alaska Supreme Court. This year’s dividend is expected to be $1,580 per eligible Alaskan, and much of the money needed to pay that dividend was scheduled to be transferred from the fund to the state treasury Friday. (Additional transfers will take place from other savings accounts used to pay the dividend this year.)

Looking ahead, the Permanent Fund Corp. trustees said Thursday that one of their main challenges is ensuring that the fund generates more earnings than needed by the state.

Last fiscal year’s 6.32% return was down from 10.74% the year before, and trustees are preparing to propose a new incentive program that would reward investment managers for meeting specific targets. The program would cost about $3 million per year, but trustees generally said Thursday that the program is necessary to keep the Permanent Fund competitive with private firms that pay higher salaries. Without it, the corporation may be unable to hire competitively or keep successful staff.