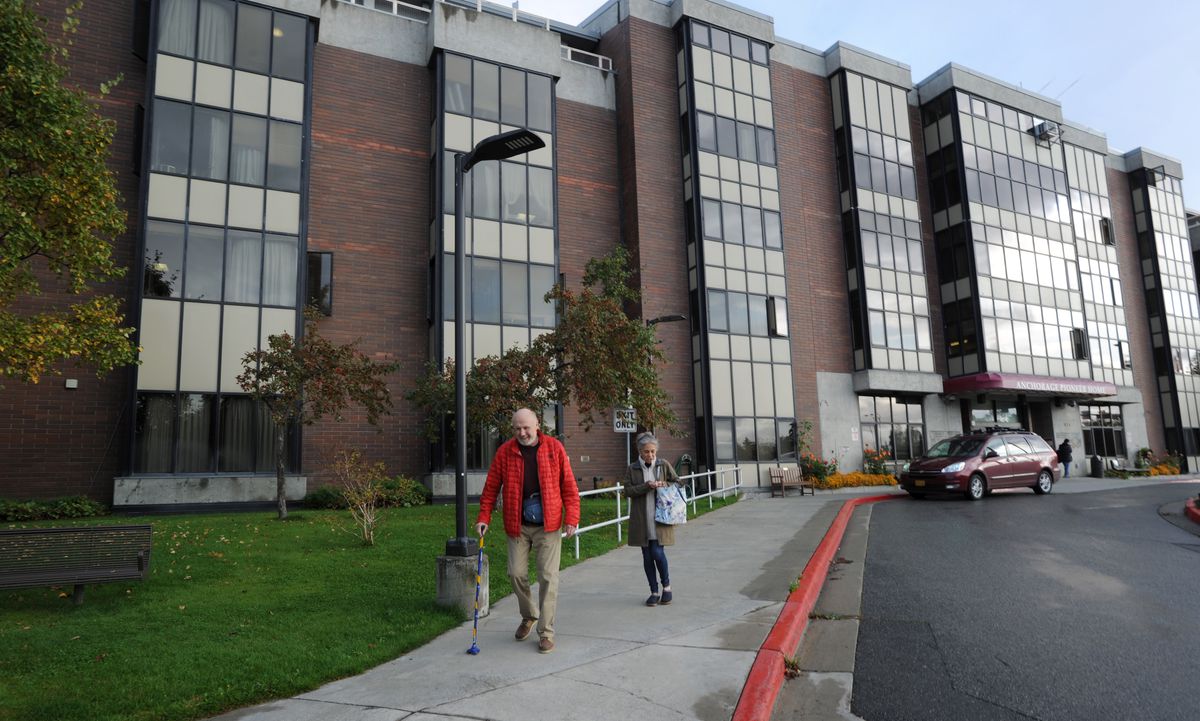 Mike Singsaas and Rocky Plotnick head out for an errand from the Anchorage Pioneer Home, Sept. 13, 2019. (Anne Raup / ADN)

Mike Singsaas and Rocky Plotnick head out for an errand from the Anchorage Pioneer Home, Sept. 13, 2019. (Anne Raup / ADN)

Jane Eidler used to be known as the “Blatchley Pool Lady.”

For 38 years, she taught swimming and managed the pool at Sitka’s Blatchley Middle School. She led walking tours of the town where she married and raised three children.

Then came Alzheimer’s, and the woman who had guided others across Sitka’s trails and waters suddenly needed guidance herself.

Sitka, a town of 8,600 people on Baranof Island, doesn’t have many private options for that guidance. There are only two private assisted-living facilities in the city, with three beds between them. Most Sitka seniors use the state-owned Pioneer Home, the oldest of six Alaska facilities built and operated by the state to care for its elderly residents.

In October, Eidler entered the Pioneer Home, and her family began paying $6,800 per month for care. Eidler had bought long-term care insurance long ago, and that took care of about $4,000 per month. The remaining balance, while steep, was manageable for a middle-class couple that had saved for retirement.

On Sept. 1, the Alaska Department of Health and Social Services sharply raised the cost to stay at one of the state-owned Pioneer Homes.

For months, the state has said it will extend an existing payment assistance plan and that no current resident will be evicted for lack of ability to pay.

Eidler’s family, and others in a similar position, have discovered that assistance comes with a catch.

“Sure, there’s a payment assistance plan, but it only comes into effect when you’re broke. And not just you, but your spouse too,” Wild said.

Under the state’s rules, if one spouse is in the Pioneer Home and one outside of it, the person in the Home cannot receive state assistance unless they both have less than $98,000 in assets combined, not counting a car or house. Anyone with more than $126,000 in combined assets can’t receive similar federal help from Medicaid. If both spouses are in the Pioneer Home, they must have less than $10,000 in assets to become eligible for state assistance.

For Jane Eidler, that means paying full price until her retirement savings are drained, something Wild expects will take 10 months. After that, her husband would be required to drain his own retirement savings.

“When she passes away, my dad is left with a house, a car and $98,000. That’s hardly enough to support his retirement,” she said.

They’ve consulted attorneys, who have suggested various techniques for legally concealing assets and getting below the $98,000 limit.

"People are also telling my dad to just divorce my mom,” Lauren Wild said. “For people to be telling him that that’s his best option, it’s just heartbreaking.”

Eidler and her family aren’t alone. In a series of interviews, Pioneer Home residents and their families described their struggles to become eligible for federal and state aid. Others have begun considering whether to simply move out.

Alaska’s registry of assisted-living facilities lists nearly 670 places qualified to care for Alaskans who can’t live alone, but the vast majority are single homes with space for no more than a handful of people. The Anchorage Senior Center, with 168 beds, is the largest facility in the state. The state’s other Pioneer Homes also rank among the 20 largest in Alaska.

In addition, many of the private homes in the state are limited in the level of care they can provide.

“Many assisted living facilities in the private sector will not take individuals who are aging and need additional care,” said Clinton Lasley, director of the Pioneer Home system, in a Sept. 12 meeting.

The Pioneer Homes are among the few places in Alaska that offer a sweeping range of care that extends from basic help to 24-hour nursing care.

Many of those opposed to the rate hikes have pinned their hopes for a repeal onto a piece of legislation called House Bill 96, which passed the House last year and is under consideration in the Senate.

If that bill becomes law, it would return the Pioneer Home rates to the older level, then allow increases only for inflation or where allowed by the Legislature.

In early September, Department of Health and Social Services Commissioner Adam Crum explained that the rate hike is necessary to cover the cost of care at the state homes.

“The previous rates did not cover the full cost of services, which meant the state of Alaska was subsidizing care for every resident, even those who were able to pay more towards their cost of service,” he wrote.

Crum said that the asset limit allows a spouse outside the Pioneer Home to keep some income.

In Wild’s experience, that doesn’t compensate for the loss of freedom and flexibility for her father.

“We’re Americans. We work, we save, so we can go on a trip when we retire,” she said of her parents. “That’s what they’ve dutifully done.”

The state’s six Pioneer Homes have a collective capacity of almost 500 beds, and each resident is facing a cost hike. The limits to the state’s payment assistance plan have existed for years, but many residents didn’t need the help until the new cost increases and weren’t aware of them.

Linda File of Fairbanks sought state and federal help this year for her parents, who are in the Anchorage Pioneer Home.

“You really have to navigate it on your own, unless you hire — as we discovered — a rather high-priced legal firm to walk you through it,” she said.

Rather than spend “something like $8,000” quoted by one legal firm, she and her husband spent three to four months working out the procedures.

“We discovered that people are kind of out there without a lot of help, because the Pioneer Home system, they can’t provide someone to walk you through the whole Medicaid system,” she said.

In the end, however, the system worked. Medicaid pays most of her parents’ bill — which now exceeds $15,000 per month — the state pays some, and her parents have an amount they pay.

She remains opposed to the rate hikes because she believes there are many people who do not have the time or knowledge to do the research she and her husband did. She believes an elder living on his or her own, without the support of their children, might not be able to navigate the process.

“I would say we are in the fortunate few,” she said.

Bill Brokaw and his wife are in the Palmer Pioneer and Veterans Home. He said it took 18 months to get a Medicaid waiver for his wife, who needs more care than he does. So far, he’s not willing to go through the state-aid process, and with help from the Veterans Administration and his other financial circumstances, the rate increase has been manageable.

He calls himself “fortunate that I’m able to handle the increase for the time being, unless things change.”

In Anchorage, Rocky Plotnick and her husband don’t want that to happen either.

“I can tell you that I’ll be damned if I’m going to liquidate everything for this,” she said. “I’m not going to milk the system.”

Her husband, Mike, has been diagnosed with Parkinson’s disease and lives at the Pioneer Home while she keeps their house downtown. Over the phone, she pulled out his latest bill.

Last week, she and Mike toured a model room at Baxter Senior Living, a private facility in Anchorage. Plotnick said the base cost of a room there is less than half their monthly bill at the Pioneer Home and likely comes with more amenities.

She said she can’t care for Mike on her own, and she isn’t going to abandon him.

“I have heard stories of people as they age and choosing not to marry or legally divorcing because of financial concerns,” she said.

“That’s so, so wrong. People shouldn’t be forced to have to do things like that.”