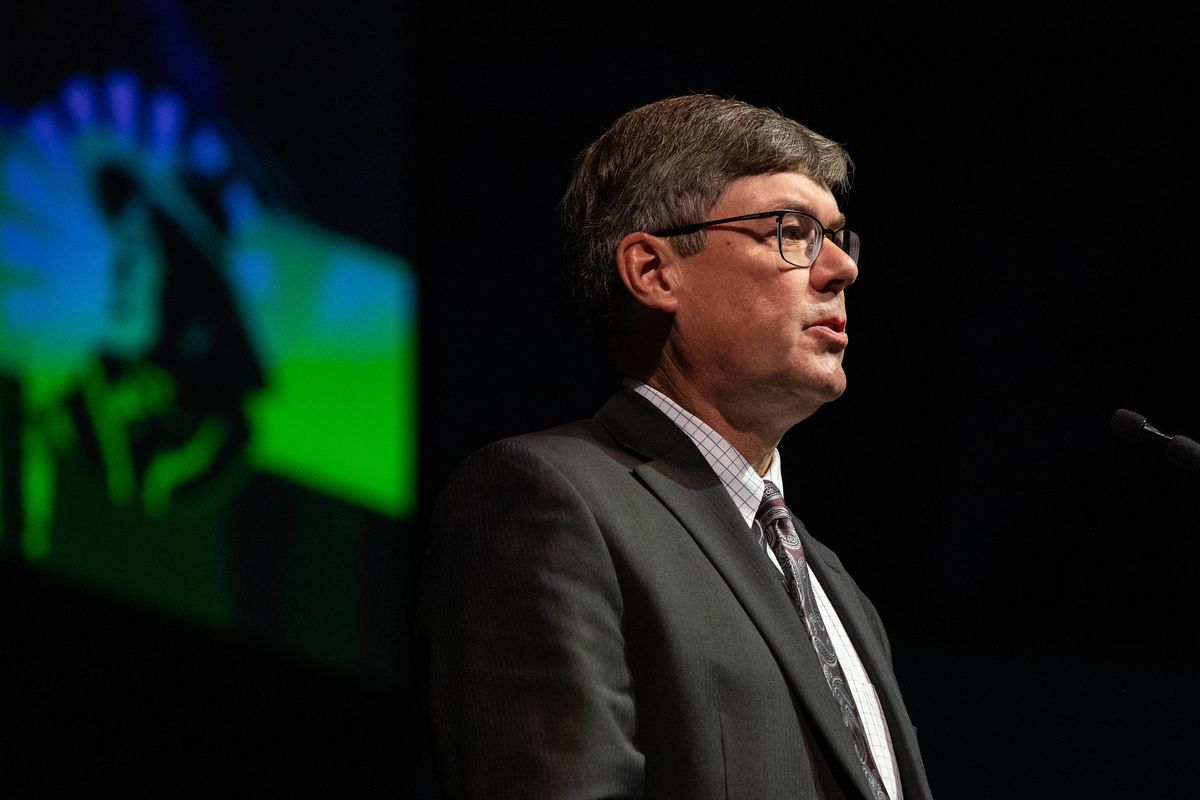 FAIRBANKS — Alaska Supreme Court Chief Justice Joel Bolger on Friday asked the Alaska Federation of Natives to join the court in resisting “political influence” in the court system, months after Gov. Mike Dunleavy withheld funding for courts over abortion decisions and violated the statutory timeline for filling a judicial vacancy.

“It’s absolutely essential that judges maintain independence to make decisions based on the law and facts and not on political or personal considerations,” Bolger said, speaking to AFN at its annual convention in Fairbanks.

“But we are facing a great deal of political pressure," he said. “Some people want to make the judicial selection system more political. Others would like to impose political consequences for the content of judicial decisions. So I respectfully ask this convention to join me in resisting political influence in our courts.”

Speaking with reporters after his speech, Bolger declined to describe the pressure in further detail. He would not say whether he was referring to Dunleavy.

AFN, holding its 53rd annual convention in Fairbanks through Saturday, is shining a spotlight on the need to improve government — from the federal level to the tribal level and in the state courts — after a tumultuous year that included disputes with the governor over his large budget cuts.

The convention "is an opportunity for Alaskans across the state to express their opinions on a multitude of issues, including the role of the federal and state government and the court system as a forum to address the challenges and opportunities facing indigenous peoples throughout Alaska,” the statement said.

The governor in June vetoed $335,000 from the court system’s budget in retaliation for the Supreme Court’s legal decisions upholding abortion rights in Alaska. Dunleavy repeated his veto in August, after the Legislature sought to reverse it.

In an unusual public statement in July, the Alaska Supreme Court responded to the veto: “Legislators, governors, and all other Alaskans certainly have the right to their own opinions about the constitutionality of government action, but ultimately it is the courts that are required to decide what the constitution mandates," the statement said. “In a democracy based on majority rule, it is important that laws be interpreted fairly and consistently.”

The governor in March also refused to fill a Alaska Superior Court vacancy in the 45-day timeline prescribed by state law, saying in a letter to the Alaska Judicial Council that a list of nominees sent to him was inadequate. Dunleavy later relented after meeting with Bolger.

AFN President Julie Kitka said Friday that she could not recall the last time a state Supreme Court chief justice was invited to address AFN, but it has happened before.

She said AFN stands ready to respond to Bolger’s request. AFN, the state’s largest Native organization, can raise public awareness and work with the Legislature to help ensure separation of powers is properly maintained between the executive and judicial branches, she said.

“We are very interested in the issues that he raised," she said. “In particular, we’re interested in the invitation for Native people to get more familiar with the justice system and the court, and be more comfortable about what is going on in the courtrooms, and about alerting his concerns about separation of powers."

In a separate matter, AFN on Friday afternoon assembled a panel of experts to examine problems in the state judicial system. Fairbanks Superior Court Judge Michael A. MacDonald in August declared a crisis in the state courts and said turnover among public defenders is delaying criminal trials.

Bolger said that problem has been growing for years and that parts of the state face large backlogs in cases. He suggested that adequate funding could possibly help address it.

In “too many cases, agency attorneys are too busy,” he said. “They are not ready to bring cases to trial. And in other cases, the police agencies do not develop or disclose investigation materials until late in the process.”

In Anchorage, Bolger said the courts are temporarily employing retired judges and pulling judges from other areas to help speed up cases.

He said he agrees that “justice delayed is justice denied," one of AFN’s themes this year.

Bolger also highlighted a new program in Northwest Alaska that will give more than 20 tribal governments the opportunity to recommend sentences.

The idea was proposed by the tribal government in Buckland and supported by Kotzebue Superior Court Judge Paul Roetman.

The recommendations will likely be limited to misdemeanor cases, after a defendant has been found guilty in the state court system, Bolger said.

The proposal will give more local control to tribes seeking greater decision-making in justice issues, he said.