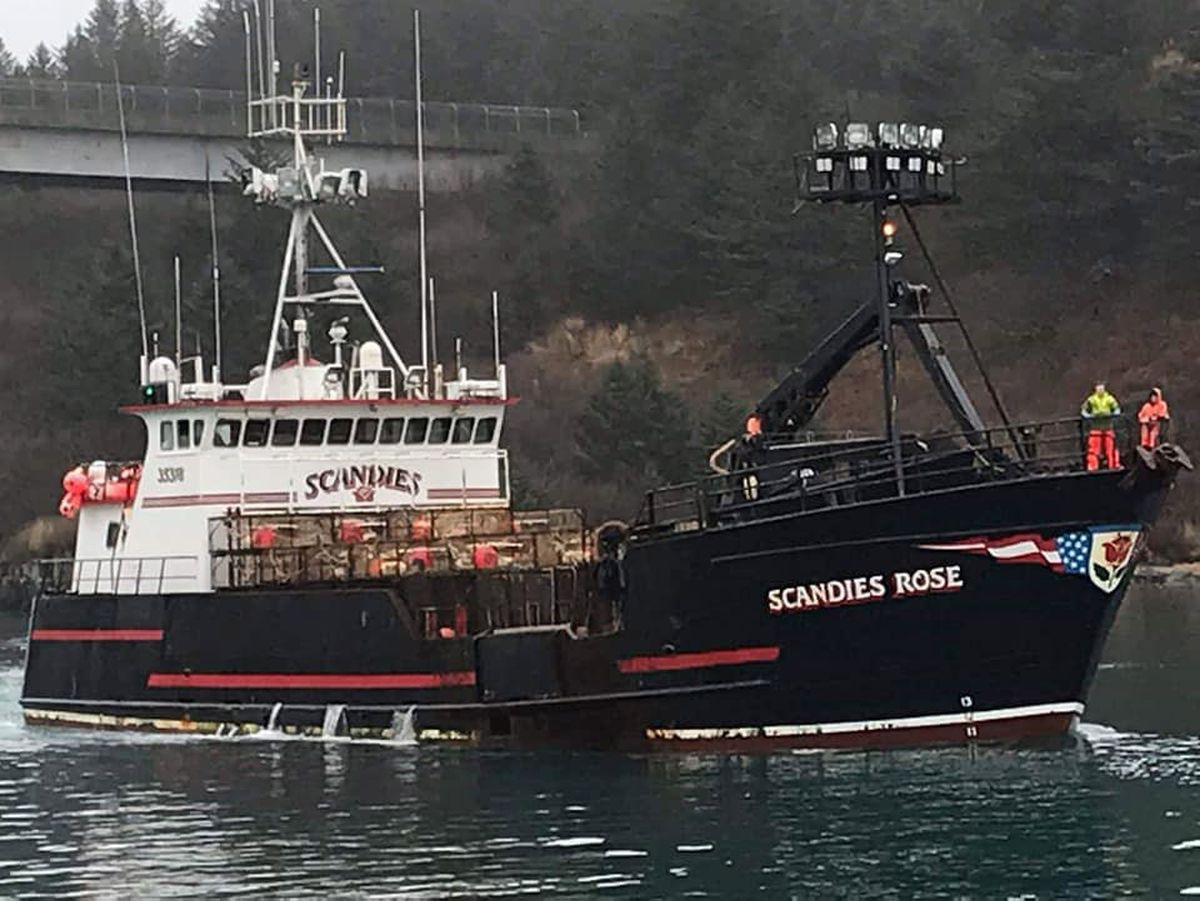 Travis Biocic and Brock Rainey stand on the bow of the F/V Scandies Rose in March 2019 at the end of the opilio snow crab season. The Scandies Rose sank near Sutwik Island west of Kodiak on Tuesday night, Dec. 31, 2019. (Photo provided by Travis Biocic)

Travis Biocic and Brock Rainey stand on the bow of the F/V Scandies Rose in March 2019 at the end of the opilio snow crab season. The Scandies Rose sank near Sutwik Island west of Kodiak on Tuesday night, Dec. 31, 2019. (Photo provided by Travis Biocic)

The Coast Guard said late Wednesday it had suspended the search for the five remaining crew members of the capsized crabbing vessel Scandies Rose in the Gulf of Alaska.

No sign of the five missing crew members or the boat was found, the Coast Guard said.

A mayday call reporting that the vessel was taking on water came in at about 10:15 p.m. Tuesday. It was south of Sutwik Island, west of Kodiak, where it had departed.

Coast Guard rescuers briefing media from Kodiak on Wednesday night said they battled headwinds of up to nearly 60 mph as they flew west over the ocean, slowing the mission. When they arrived at about 2 a.m., visibility was almost zero.

A faint light was picked up through night vision goggles, and a medic was lowered down — only to find an empty life raft. Then, the rescue crew saw another light about a half-mile in the distance. It was fixed to a second raft, this one carrying two men. The men were airlifted into the helicopter, where the medic discovered they were “extremely hypothermic” but otherwise uninjured.

Had the men not been in the raft, they likely would not have been found, Lt. Chris Clark said.

The men were rescued about 10 miles from the last known location of the Scandies Rose, about 170 miles southwest of Air Station Kodiak. Temperatures were about 10 degrees and in the single digits with windchill.

The men, 38 and 34 years old, had been in the raft for four hours but were found in good spirits.

“Pretty much every variable weighed against both parties” said Lt. Kevin Knaup, who co-piloted an HC-130 Hercules airplane used in the rescue. “Everything was working against being able to find these two people.”

Coast Guard officials have not released the names of the rescued men or the missing crew members.

The rescued fishermen were wearing survival suits, designed to help them endure the elements, stay afloat and be located. They told rescuers they were the only two who made it into a raft, and they didn’t know if their fellow crew members got into survival suits.

Scandies Rose is a 130-foot steel crabbing vessel built in 1978 and homeported in Dutch Harbor. The ship is owned by the Scandies Rose Fishing Co. LLC out of Seattle, and is registered in Alaska. The company fishes for crab and cod in the Bering Sea.

Dan Mattsen, part owner of the boat, told the Seattle Times that the boat had a load of crab pots and was headed from Kodiak to the Bering Sea.

There haven’t been any details released about what may have caused the large steel ship to sink. Earlier in the day, Coast Guard spokeswoman Melissa McKenzie said efforts are focused on finding the remaining five fishermen, and then an investigation will launch.

News about the Scandies Rose spread rapidly through the commercial fishing community Wednesday, with Facebook pages for other vessels posting notes of sympathy and support.

Fisherman Jon Ramlo found out when he logged into Facebook around 9 a.m. from his home in Killeen, Texas. Ramlo got into the industry in 2016, working to unload ships’ catch onto a processing dock when they come to harbor.

“We’re all trying to play detective here. I’ve been getting a lot of messages,” said Ramlo. "Nobody really knows what the hell happened.”

“That was the first boat I ever stepped foot on,” Ramlo said of the Scandies Rose.

Ramlo said he knows the captain and the two rescued men, and his heart sank when heard the news. His phone buzzed all day, as he connected with others in the community hoping for some good news.

Commercial fishing deaths are less common than they once were, but are far from unheard of. In 2017, the F/V Destination sank, claiming the lives of all six aboard. When the Exito sank near Dutch Harbor in 2016, three crew members were rescued while two perished. Five of the 47 crew members on the Alaska Ranger died when it sank in 2008, after leaving Dutch Harbor to fish the Bering Sea.