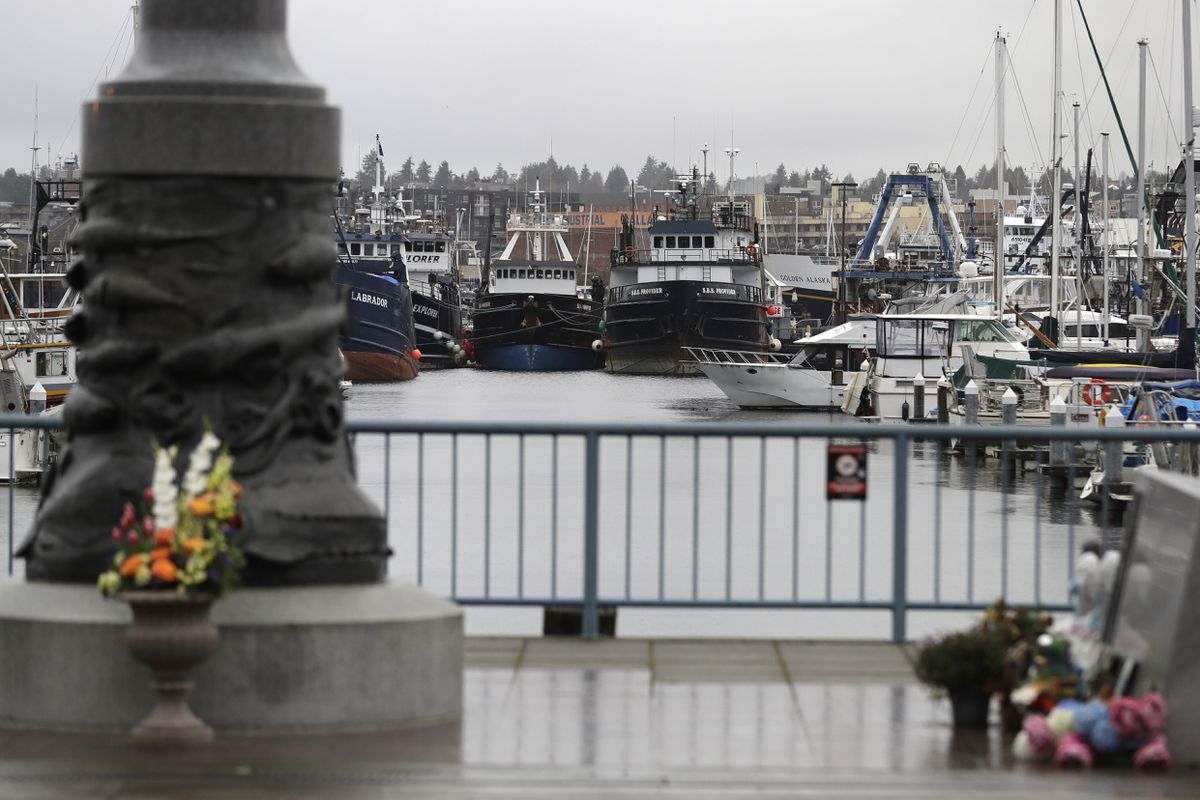 Fishing vessels and boats used for other purposes are shown parked near the Seattle Fishermen's Memorial on Thursday. Items left at the memorial Thursday included a ball cap with the name of the Scandies Rose, a 130-foot crab fishing boat from Dutch Harbor that sank on New Year's Eve. (AP Photo/Ted S. Warren)

Fishing vessels and boats used for other purposes are shown parked near the Seattle Fishermen's Memorial on Thursday. Items left at the memorial Thursday included a ball cap with the name of the Scandies Rose, a 130-foot crab fishing boat from Dutch Harbor that sank on New Year's Eve. (AP Photo/Ted S. Warren)

“The hazards are endless,” Wilwert said. Equipment, distance from other boats and harrowing weather all pose dangers.

The sinking of the 130-foot Scandies Rose sent a shock wave through Alaska’s commercial fishing industry, especially among those in the relatively small group that fishes the Bering Sea and Gulf of Alaska.

Greg Alexander, a veteran of those waters, was a close friend of Scandies Rose captain Gary Cobban Jr. He said Cobban Jr. was a “first-class” captain with a sterling safety reputation who ran with an experienced crew.

“That guy was married to that boat," Alexander said of his longtime friend. "That was his girl, and he took care of it.”

Investigators are trying to learn what happened when the Scandies Rose sank on New Year’s Eve. In a mayday call Tuesday evening, the crew reported they were taking on water south of Sutwik Island, the Coast Guard said.

The Coast Guard rescued two crew members, Dean Gribble Jr. and John Lawler, who had spent multiple hours in survival suits on a life raft in high swells early Wednesday morning. Gale warnings and heavy freezing spray warnings had been issued for the area the boat was in, the Daily News previously reported.

One of the survivors, Gribble, 38, said in a YouTube video posted Thursday and later made private, that “it happened really fast. Everybody was trying to get out. Everybody was doing everything they could ... We’re in 20-foot seas, it’s blowing 40, icy conditions, worst possible conditions.”

Rescuers continued to search for the other five missing members of the crew — identified as the captain, Cobban, his son David Lee Cobban and crew members Arthur Ganacias, Brock Rainey and Seth Rousseau-Gano — before eventually calling off the search Wednesday evening.

[‘From sleeping to swimming, it was about 10 minutes,’ says survivor of fishing boat sinking]

‘Nobody thinks that way anymore’

Cold water removes heat from the body 25 times faster than air at the same temperature, Wilwert said. If someone is tossed overboard or is in the water after a boat sinks, the situation in Alaska waters becomes dire, fast. And boats can be far from the Coast Guard or other vessels for rescue. Crews must be equipped to survive on their own, Wilwert said.

Commercial fishing was once the most dangerous job in the country, Wilwert said, and during the 1970s and 1980s an increase in accidents and deaths ultimately led to the passage of the Commercial Fishing Industry Vessel Safety Act of 1988. The regulations required boats to have survival suits and life rafts and to carry out onboard safety drills, among other safety measures.

Since then, Wilwert said, he thinks attitudes around safety among fishermen have changed and helped create a safer industry.

“There was a time in the ’70s and ’80s where, I think, even the fishermen would tell you that there was a mentality, that ‘you have to go out but you don’t have to come back’ kind of thing,” Wilwert said. “That just doesn’t exist, nobody thinks that way anymore.”

Alexander has fished in the Bering Sea and Gulf of Alaska for 40 years. He recalls the 1980s, when equipment was far inferior to what’s available now. He survived two sinking ships in ’84, and both were due to equipment failures.

Today, he said, no one wants to be reckless. Scenes from the long-running reality TV show “Deadliest Catch” that have made the industry infamous exaggerate working conditions in the Bering Sea crab fleet, he said. Most fishermen are constantly looking to improve safety on the boats, he said.

“The industry’s changed for the better, and it will continue to get as good as we can make it,” he said.

The number of people who die in Alaska’s commercial fishing industry varies year to year. But deaths from fishing-related accidents were on a downward trend from 1990 to 2014 in Alaska, according to research from the National Institute for Occupational Safety and Health.

More recently the numbers have continued to vary, according to figures from the Coast Guard, which tracks operational deaths in federal fiscal years that begin in October and end the following September. From fiscal year 2011 to fiscal year 2020, operational fatalities — which occur when a boat is operating and exclude natural causes — have been up and down: 2015 saw no deaths at all while on the high end, there were 11 deaths in 2011.

Last fiscal year, the Coast Guard recorded two commercial fishing fatalities in Alaska. Fiscal year 2020, which began this past October, has seen six fatalities so far, if the five presumed dead from the Scandies Rose sinking are included.

Seventy-three crew members died during the 1990s in the Bering Sea and Aleutian Island crab fleet, which made it the “most hazardous commercial fishery in the United States” at the time, according to a report by NIOSH. Though regulations for safety devices were already in place, boats were being overloaded with crab pots, the report stated.

Amid declines in crab stocks and concerns about safety, the Bering Sea and Aleutian Island crab fishery began to change, according to a report by the North Pacific Fishery Management Council. In the early 2000s, the industry switched from a race-like derby system to a quota system where the National Oceanic and Atmospheric Administration allocated shares for crab harvests to different boat owners based on what they had fished in the past. The changes led to boats carrying a smaller number of pots and reduced the number of boats on the water, according to a NIOSH report.

In 2015, the Coast Guard started requiring boats that fish a certain distance offshore go through a dockside inspection, which had previously been voluntary. The examinations cover aspects of boat safety, from life-saving equipment to the boat’s machinery and the crew’s CPR certifications. In order to receive a Coast Guard decal showing that the boat meets all regulations, according to Wilwert, examiners give boats the opportunity to fix anything that might be lacking.

But disaster has continued to strike Alaska fishing boats time and time again.

Among other tragic accidents in Alaska’s recent fishing history, all 15 people onboard the Arctic Rose were killed in 2001 when the vessel sank in the Bering Sea. A Coast Guard investigation faulted the owner for violating the trawler’s safety guidelines and stated that an inexperienced crew left watertight doors open on the vessel, which flooded and sank in 2001, according to news accounts at the time.

All six crew members of the fishing vessel Destination perished in February 2017, as the boat was heading out to fish for crab in the Bering Sea. The NTSB later determined that the boat capsized because the captain had decided to continue into heavy freezing spray conditions and hadn’t made sure the boat was stable enough to accumulate ice or taken actions to “limit the effects of icing,” according to its report published in June 2018.

The accident happened after about a decade without the loss of a vessel in that fishery, Wilwert said. It had started to seem like those types of days were over, he said.

“And then you wake up one day and you realize that anything can happen at any time," Wilwert said. "The sea can be very unforgiving.”

The dangers of the sea are well known in the industry, said longtime fisherman Alexander, but it’s alluring. For guys like him and Cobban Jr., who were raised by fishermen, it’s all they know.