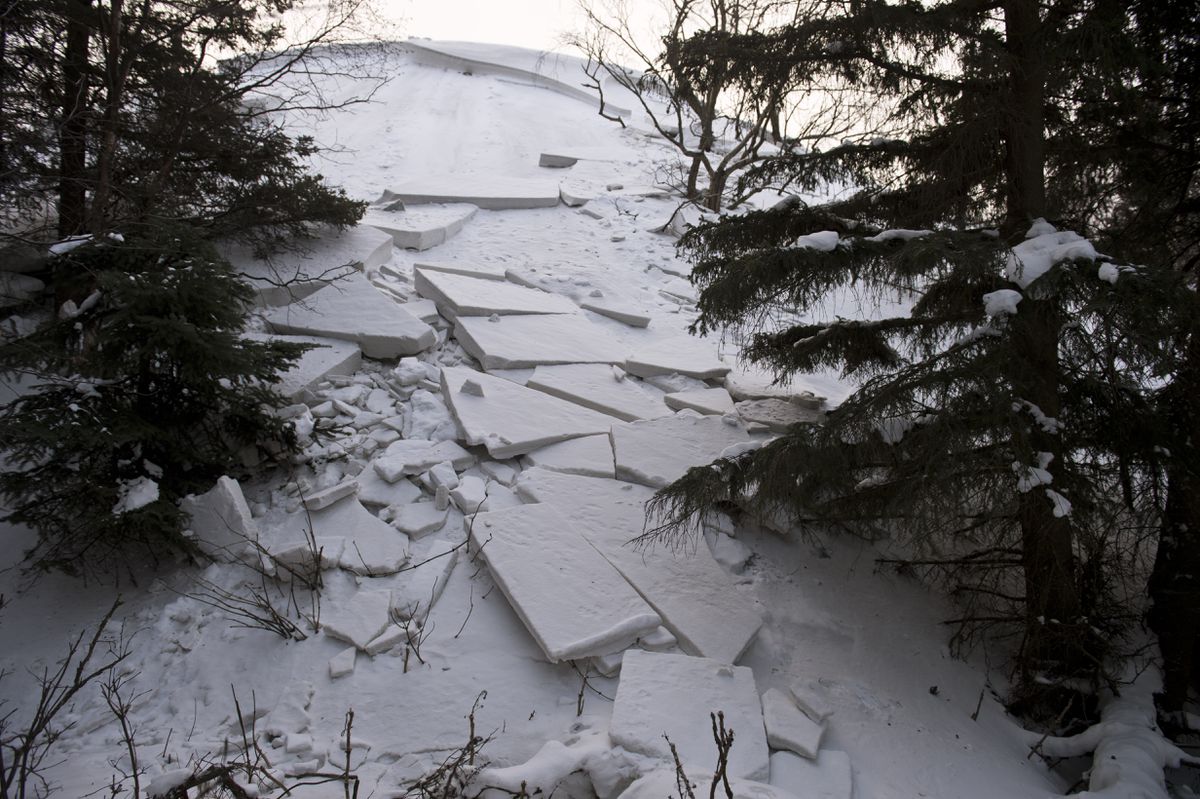 Slabs of snow slid from a sand dune hill at Kincaid Park near the Jodhpur Motocross Track recently. Three skiers in the Junior Nordic program were momentarily caught in an avalanche at the site on February 1, 2020. (Marc Lester / Anchorage Daily News)

Slabs of snow slid from a sand dune hill at Kincaid Park near the Jodhpur Motocross Track recently. Three skiers in the Junior Nordic program were momentarily caught in an avalanche at the site on February 1, 2020. (Marc Lester / Anchorage Daily News)

The Nordic Skiing Association of Anchorage has made the sand dunes at Kincaid Park off-limits to its Junior Nordic program after three young skiers were caught in an avalanche there Saturday.

One child was fully buried by snow, and two others were partially buried. Coaches and parent volunteers immediately removed all three and none were injured, according to NSAA Program Director Sara Kamahele.

“This is sort of a unique incident,” Kamahele said. “We’ve never had this happen before.”

The skiers were part of the Wolverine group, the second-highest skill level of Junior Nordic’s four groups. The Junior Nordic program is for kids ages 6 to 14 and meets in three Anchorage locations and has 696 children enrolled in its current session, according to Kamahele.

The sand dunes are not always part of the route during Kincaid Park practices. Skiers normally stick to trails, but the area has long been an occasional destination for kids to ski its hilly terrain, organizers say.

“The sand dunes at Kincaid are basically the only place in which the terrain can produce an avalanche,” Johnston said.

“Even though it’s fun and beloved, and I’m sure we’re going to have a lot of people disappointed that they aren’t going to go there during practice anymore, we just decided it wasn’t worth the risk,” she said.

About 18 skiers, supervised by three coaches, were visiting the dunes Saturday when the incident happened at 10:30 a.m., Kamahele said. Some skiers were ascending the hill when the slab released, according to an account submitted by coaches to the Chugach National Forest Avalanche Information Center.

The location of the fully buried skier was known immediately and the child was removed from the snow in less than a minute, according to the CNFAIC report. It’s unclear if the the two other skiers could have freed themselves from the slide because they also were extracted quickly by the adults, Kamahele said. Two parents recreating nearby stopped to help, according to the coach’s report.

“The coaches were quick to respond. A couple of them actually were avalanche trained, and so that was helpful,” Kamahele said. “That’s not normal for our group, but in this case that was quite a lucky coincidence.”

No emergency responders were requested or needed, according to Johnston. Practice continued as planned.

[‘The tallest Polar Cub’: My life as a 28-year-old Junior Nordic skier]

At the conclusion of practice, coaches briefed parents as they picked up their kids. NSAA sent an email about the incident and their new policy to all Junior Nordic parents on Monday.

Wendy Wagner, director of the Chugach National Forest Avalanche Information Center, said it was a wind slab avalanche that affected the cross-country skiers. That can occur when wind packs the snow on the top layer above weaker, looser snow.

“That hard layer, if it’s just sitting precariously enough, it doesn’t take much for it to lose its adhesion to the loose snow underneath,” Wagner said.

“Small terrain can still produce an avalanche,” she said.

“Human triggered avalanches are likely, and it’s a time to let the mountains adjust before getting into the steeper terrain,” Wagner said.

“Avalanche danger changes very quickly, so we’ll have to see what the weather does for tomorrow and definitely for this coming weekend, but a rise in temperature is a contributing factor.”