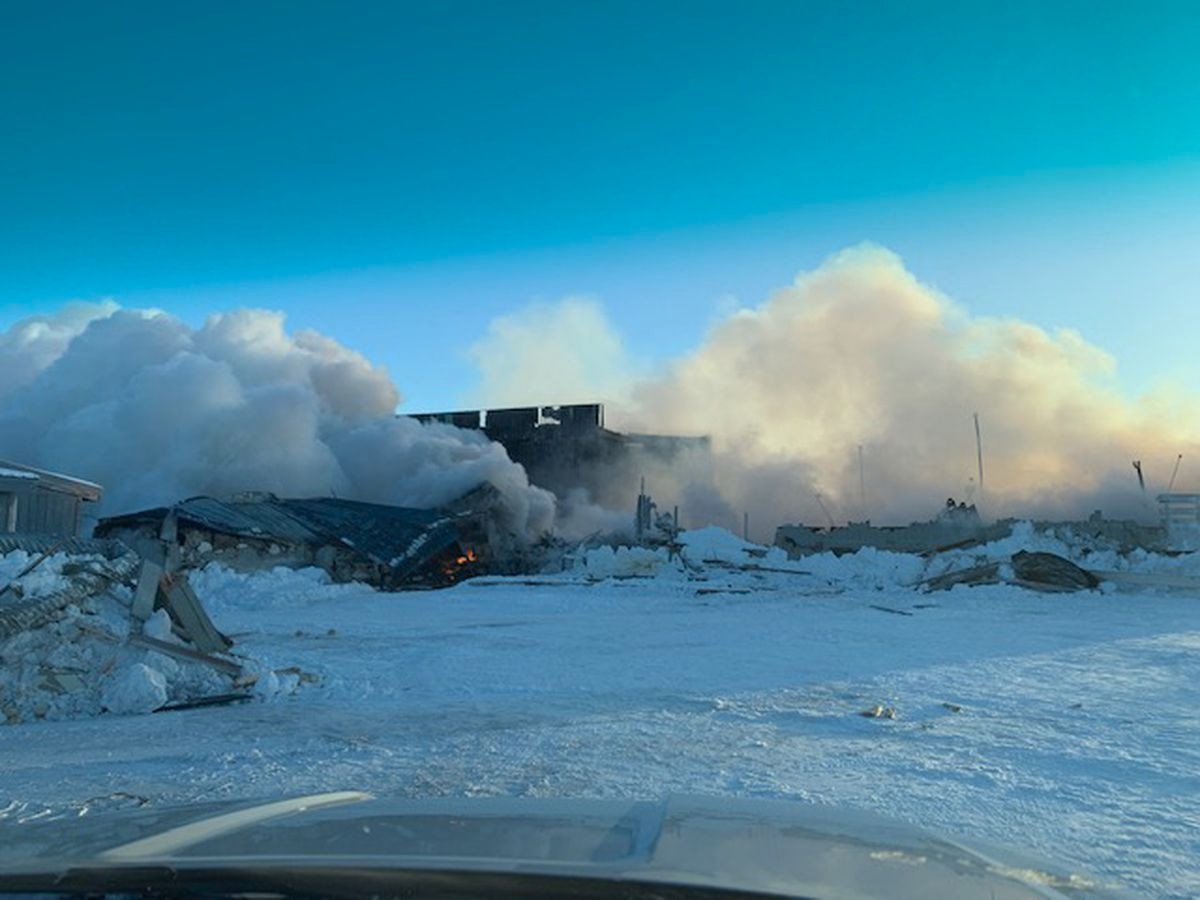 Smoke billows from the Kaktovik’s Harold Kaveolook School Friday, Feb. 7, 2020. First responders were called to the building around 3 a.m. but cold weather hampered efforts to extinguish the blaze. (Photo courtesy from Amanda Kaleak)

Smoke billows from the Kaktovik’s Harold Kaveolook School Friday, Feb. 7, 2020. First responders were called to the building around 3 a.m. but cold weather hampered efforts to extinguish the blaze. (Photo courtesy from Amanda Kaleak)

Instead of returning to school Monday, Kaktovik students and officials are figuring out their next steps after flames devoured the 50-year-old Harold Kaveolook School early Friday. It could be more than a week before classes resume in temporary stations throughout the North Slope village.

Kaktovik Mayor Amanda Kaleak said the community has come together to provide for the students -- classes will be taught at the senior center and community center and a local business offered access to a kitchen so that meals will still be available. School employees are still receiving paychecks, she said.

And as the flames gave way to ashes Sunday, Kaleak said the school will be rebuilt as soon as possible.

“We’re trying to reassure the kids that everything’s going to be OK,” she said. “We’re going to rebuild, they’re not going to get behind in school and we’re not going to extend the school year because of this disaster.”

The fire was first reported around 3 a.m. Friday, but the rescue efforts were hampered by extreme temperatures of about 40 degrees below zero. Firefighting equipment, like hoses and tanks, initially froze and had to be thawed throughout Friday morning as crews tried to extinguish the blaze. No one was injured.

Please pray for my village of Kaktovik. Our new gym is gone. Fire is spreading to the only school we have. Freezing temps, local firefighters trying their best to fight the fire. Equipment & hoses, air tanks keep freezing. February 7, 2020 3am pic.twitter.com/3OetBKPhK9

Kaktovik, with a population of about 250, sits on Barter Island in the Beaufort Sea, inside the Arctic National Wildlife Refuge. The nearest school is more than 150 miles away.

Kaleak said the school in Kaktovik functions as a community hub and is filled with the village’s history. Kaleak graduated from there, as did her parents. Her 12-year-old daughter, Jaylee, is a student there.

The community foundation described the school in an online fundraiser as “the heart of the village.”

A $16 million addition, including a regulation-size gym, was built in 2016. Kaleak said it brought a lot of pride to residents.

“We were all really proud of it,” she said. “It was always sparkling clean -- nobody even wore street shoes in there, that’s how much they wanted to keep it nice.”

But the gym and new portions of the school have had recurring issues with frozen pipes, she said.

The pipes froze again Feb. 3, but Kaleak said things were still working in the old side of the building, so classes continued as normal.

Leroy Stigen, the school’s maintenance manager, said Friday the fire may have ignited from a heater placed on the ground in an attempt to thaw the frozen pipes. The sprinkler system could not activate when the fire started because the pipes were frozen, Kaleak said.

State deputy fire marshals flew to Kaktovik on Sunday to investigate what caused the blaze.

The flames did not reach the elementary wing or teacher housing.

Earlier in the week, on Feb. 3, the pipes had frozen and the school moved a basketball tournament to Atqasuk because the situation didn’t improve in time. Kaleak said students were disappointed. They flew out on Thursday.

“Every other place has had multiple home games this season,” she said. “This was going to be our first so far and everyone was looking forward to it.”

The team found out early Friday from their rooms in Atqasuk that there was a fire at the school. Seventh grader Jaylee Kaleak said she and her teammates were scared and emotional when they saw photos of flames shooting from the building, but they still played games Friday and Saturday night.

They flew back to Kaktovik Sunday and drove by the ruins. Jaylee said she’s still taking in the disaster.

Classes will tentatively resume on Feb. 18, Amanda Kaleak said. Officials are working to get the senior center and city buildings up to safety codes and ensure that it is equipped to handle the students.

A statement from the North Slope Borough Sunday said that officials consider it a priority to resume classes as soon as possible.

“Safe classrooms will be up and running as soon as possible but we continue to ask for the communities patience as we work to ensure everything is safe and structurally sound before re-opening regular school hours and activities,” the statement said. “... The people of Kaktovik are a strong, proud, and resilient community. We will provide more information after it becomes available and State and Borough authorities conclude their investigation.”

Tonight I want to extend my thoughts and prayers to the residents of Kaktovik for the tragic fire that ravaged the...

On Sunday afternoon, the rubble that once was the school wasn’t smoldering much, Kaleak said. The metal frames of the building were still standing. Inside where the gym once was, Kaleak said she could see the scoreboard and metal ring of the basketball hoop.

“It’s heartbreaking. I just can’t look at it that long.”