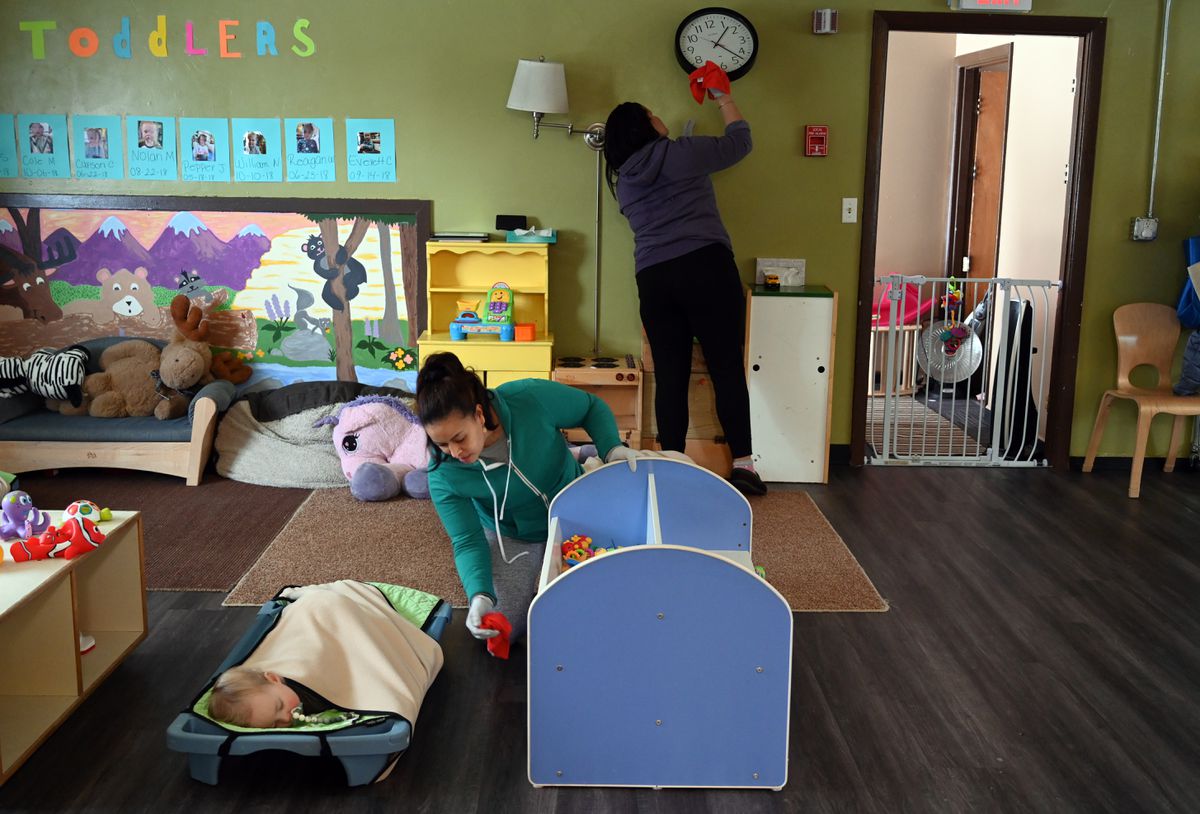 We’re making coronavirus coverage available without a subscription as a public service. We depend on the support of readers to produce journalism like this for the community every day. Help us do this work - subscribe now. You can find the rest of our coverage of the novel coronavirus here.

Three pink-cheeked toddlers snooze on cots to the sounds of an instrumental lullaby album while their teachers mop, scrub and wipe chairs and toys with disinfectant.

Normally, there would be a lot more children in this classroom. But this is child care in coronavirus times.

More than 145,000 Alaska schoolchildren will be home until at least the end of March on a governor’s order meant to stunt the spread of the new virus. Child care centers in the state have received no such directive, leaving them with wrenching choices about whether to stay open during an extraordinary global shutdown.

On Tuesday afternoon, the state Department of Health and Social Services released a memo calling child care “a critical support for working families, their children and businesses.” Child care providers should stay open “if they can safely do so,” the memo said.

“We do not want children to be cared for by elders, because people aged greater than 60 years are at increased risk for severe COVID-19 illness,” wrote DHSS commissioner Adam Crum.

Some child care centers say they are staying open to help families who truly can’t stay home and have to work. They also worry that if they close out of caution, parents will stop making tuition payments and businesses operating on slender margins could crumble.

“We don’t know if closing is going to mean our downfall,” said Kyle Gardner, the owner of Building Blocks Early Learning Center in Midtown Anchorage. “I don’t want to go out of business.”

[Alaska’s statewide school closure is beginning. No one knows quite how it will work.]

Almost nobody in the child care business is sitting on financial reserves, said Christina Eubanks-Ohana, the executive director of Hillcrest Children’s Center, which has been operating in Government Hill for more than 50 years.

An extended closure would mean ruin for many small centers, she said. And if child care centers close and lay off already hard to retain employees, parents could be in for trouble when it’s time to go back to work.

She thinks that’s partly why the state hasn’t shut down child care centers.

“We don’t have those profit margins,” said Eubanks-Ohana. “And we are essential to a healthy economy.”

Others say they wish the state would take decisive action and shut the centers down.

“I want to be closed. I should be closed,” wrote Gardner, the owner of Building Blocks, in an impassioned letter to city and state health officials. “Schools are closed. Bars are closed. Restaurants are closed. Gyms, theaters, and bingo halls are closed.”

Officials made those hard decisions for business owners for the sake of public health, he said. Why not for child care businesses, where the youngest children — notorious germ-sharers — are spending their days?

Ever tried to get a group of 18-month-olds to adopt social distancing?

“Social distancing is not a feasible option as a child care center,” said Gardner. “If that’s what we’re supposed to be doing — it would be nice to have an oversight entity say it isn’t safe.”

[Are Alaska’s hospitals equipped to handle the coronavirus?]

A state mandate would also allow Gardner to shut down without angering families, who might choose to go elsewhere, leaving him with a cash-flow problem.

“Without that mandate, I have less power to plead with my property manager, to say, ‘Hey, let us have a default on this month’s payment,’ ” he said.

Many centers say they are seeing the numbers of children attending dwindle -- which helps with keeping CDC-recommended space and cleanliness.

At Tundra Tykes in downtown Anchorage, operated by the national child care chain Kindercare, the school is still open but only about 37 children out of a usual 88 were there on Tuesday, said Missy Conley, the center director.

Many of her families are federal employees who haven’t been given the option to work from home.

“Our challenge is how can we keep our school open, following as many safety precautions as possible,” Conley said.

The vulnerability of employees is another big concern for child care administrators.

Working in child care means coming in very close contact with kids all day. Though evidence suggests kids don’t get as sick with COVID-19 as adults and especially seniors, they can still carry and spread the virus, according to public health officials.

“We’re literally on the front lines nearly as close as medical workers to potentially spreading the virus,” Gardner said.

Eubanks-Ohana puts it another way.

“I can’t stop from being sneezed on when I’m changing a diaper,” she said.

Shutting down would create problems too. Early childhood educators also typically make low wages. High turnover is a chronic problem. Centers say they want to do everything they can to keep their teachers, many of whom live without any financial cushion.

“Our staff are paid a little over minimum wage,” said Eubanks-Ohana. “They are paycheck-to-paycheck. They need to be employed.”

Parents with young kids are also scrambling for care as some centers shut down.

Rachael McPherson works in Anchorage as a fundraiser for a nonprofit and has two kids ages 4 and 2.

They attended an Anchorage child care that has closed -- but is asking parents to continue to pay tuition.

She quietly hired one of the teachers from the school to watch her kids and a few others this week. The arrangement is working, but only temporarily.

“I just worry we’re putting such a burden on the actual staff at the small centers,” she said. “It’s just unsustainable, what we’re doing right now.”