Alaska’s coronavirus response has escalated as the number of cases has grown. Here’s where things stand. 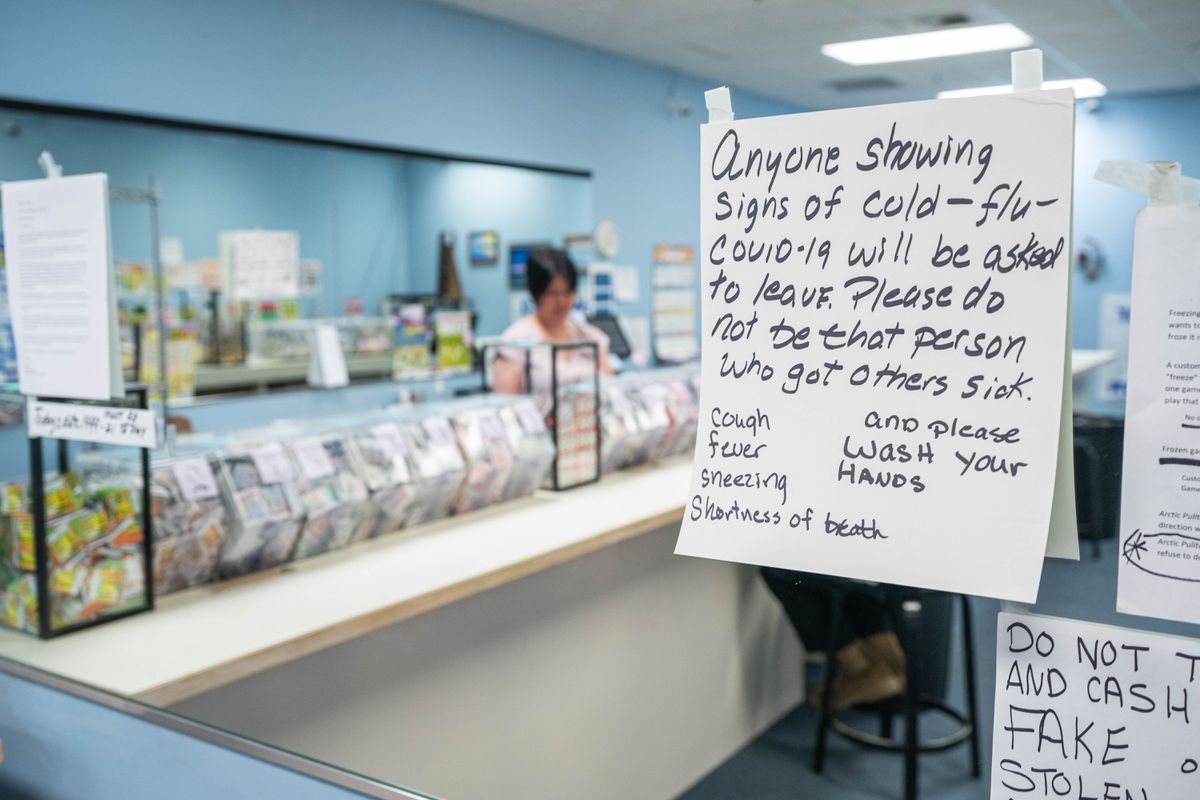 Nhan Ton works at Arctic Pulltabs in the Dimond Center mall on Wednesday in Anchorage. On Friday, the Municipality of Anchorage issued a "hunker down" order for residents that urges them to stay at home and closes down businesses deemed to be not essential, (Loren Holmes / ADN)

Nhan Ton works at Arctic Pulltabs in the Dimond Center mall on Wednesday in Anchorage. On Friday, the Municipality of Anchorage issued a "hunker down" order for residents that urges them to stay at home and closes down businesses deemed to be not essential, (Loren Holmes / ADN)

We're making coronavirus coverage available without a subscription as a public service. But reader support makes this work possible. Please consider joining others in supporting local journalism in Alaska for just $3.23 a week.

As the number of confirmed COVID-19 cases rises slowly but steadily in Alaska, government officials in Anchorage and at the state level have taken more aggressive actions to thwart the spread of the new coronavirus.

A lot has happened since the first case of COVID-19, the illness caused by the novel coronavirus, was reported in the state on March 12. Schools statewide are now closed until May 1. Anchorage residents were told to “hunker down.” Alaska restaurants aren’t open for dine-in service anymore and at least some other businesses are temporarily closing their doors.

As of midday Sunday, there were 22 total known cases in Alaska: six in Anchorage, seven in Fairbanks, six in Ketchikan, one in Seward, one in Soldotna and one in Sterling. Many of the cases are linked to recent travel, but health officials on Friday said they were still trying to determine how a few cases in Fairbanks had spread.

The evolving nature of a global pandemic means there’s likely more change to come. Gov. Mike Dunleavy said Friday that “nothing is off the table" when it comes to the state’s potential preventive measures.

But for now, here’s where things stand.

Starting Sunday at 10 p.m., Anchorage residents must “hunker down,” according to an emergency order issued by Mayor Ethan Berkowitz on Friday.

The order, which is in effect until March 31, asks residents to “stay home as much as possible” and closes businesses deemed not to be essential.

But there are exceptions to the order, including people who work in a list of “critical jobs” as described by the municipality. Plus, grocery shopping is still allowed and so is going to the doctor.

The order also says it’s fine to “get fresh air without contacting others,” which means that the hundreds of miles of trails in Anchorage are still usable if you maintain a safe distance (at least 6 feet) from other joggers and skiers.

Private and public schools across Alaska will remain closed to students until May 1, the state announced Friday. Speaking to reporters, Alaska Department of Health and Social Services Commissioner Adam Crum said that students will learn through “distance delivery methods.”

The closure also includes the suspension of all after-school activities. The state had previously announced a statewide schools closure from March 16 to 30.

The University of Alaska system will conduct classes remotely for the rest of the semester, and all of its scheduled commencement ceremonies in the spring have been canceled, according to a Monday statement form UA president Jim Johnsen.

“We encourage families to honor their UA graduate in small family celebrations after the semester is complete,” Johnsen said in a statement. “In addition, each of the universities and community campuses will develop appropriate and safe ways to celebrate our students’ great accomplishments.”

A statewide closure of restaurants and bars to dine-in service went into effect on Wednesday, after a similar order was issued for the Municipality of Anchorage earlier in the week. Take-out and delivery services are still allowed, according to both orders. The statewide mandate lasts until 5 p.m. April 1.

The state on Wednesday also mandated the closure of all entertainment establishments, including movie theaters, fitness centers and bingo halls until 5 p.m. April 1.

Later in the week, the state issued more stringent mandates for “personal care” businesses in the Ketchikan Gateway Borough and the Fairbanks North Star Borough, two areas that have seen an uptick in COVID-19 cases. In those jurisdictions, businesses in which people are closer than 6 feet from each other were ordered to stop operations beginning Saturday, March 21.

Also, in Ketchikan Gateway Borough and Fairbanks North Star Borough, “no gatherings of more than 10 people may take place, and if a gathering does take place people must be six feet apart from each other,” the order says.

After announcing three new confirmed cases of COVID-19 on Saturday, Ketchikan strongly urged residents to stay home and shelter in place, and urged non-essential businesses to close for 14 days.

On Saturday, the federal Small Business Administration announced it would offer low-interest loans to Alaska businesses “suffering substantial economic injury as a result of the coronavirus," according to an announcement from the SBA.

Shortage of materials for testing

The Anchorage Office of Emergency Management said in an alert Saturday that the municipality is “facing a shortage of personal protective equipment."

Similar shortages are being seen worldwide, and it’s unknown when more personal protective equipment — such as exam gloves, surgical masks and medical gowns — might arrive, the Office of Emergency Management said. Health care workers use such equipment to protect themselves while administering COVID-19 tests and treating patients.

“Given the national demand for PPE and Alaska’s distance from suppliers, avoiding PPE shortages in Anchorage will require stretching existing supplies as long as possible,” the office said.

[A list of PPE needed and where it can be donated can be found here.]

On Friday, the Office of Emergency Management also warned that the municipality could soon run out of the swabs needed in the first stage of a COVID-19 test. The city said current demand is for 250 to 280 tests per day, and asked medical providers to donate swabs.

The state’s chief medical officer, Dr. Anne Zink, noted the shortages when speaking to reporters on Friday. She asked that people consider donating personal protective equipment as well as blood if they are able.

To that end, state officials mandated that health care providers and patients “postpone or cancel all non-urgent or elective procedures for three months.”

The state also mandated that any elective dental procedures be postponed for a month.

Public health officials have strongly advised against non-essential travel — both in-state and out-of-state — for Alaskans, as most of the state’s confirmed cases of COVID-19 are associated with travel Outside and access to health care in many Alaska communities remains severely limited. The state is encouraging any Alaskans who plan to return to the state within the next month to come back now.

In addition, the state asked that any tourists with plans to arrive in the state, or who are already here, suspend their travel plans and “return to their home communities now,” Zink said.

“Social distancing is one arm to slow to the spread of COVID-19,” Zink said. “Minimizing travel is equally important in slowing its spread.”

Several Alaska villages sought to ban or limit air travel, except in the case of emergencies.