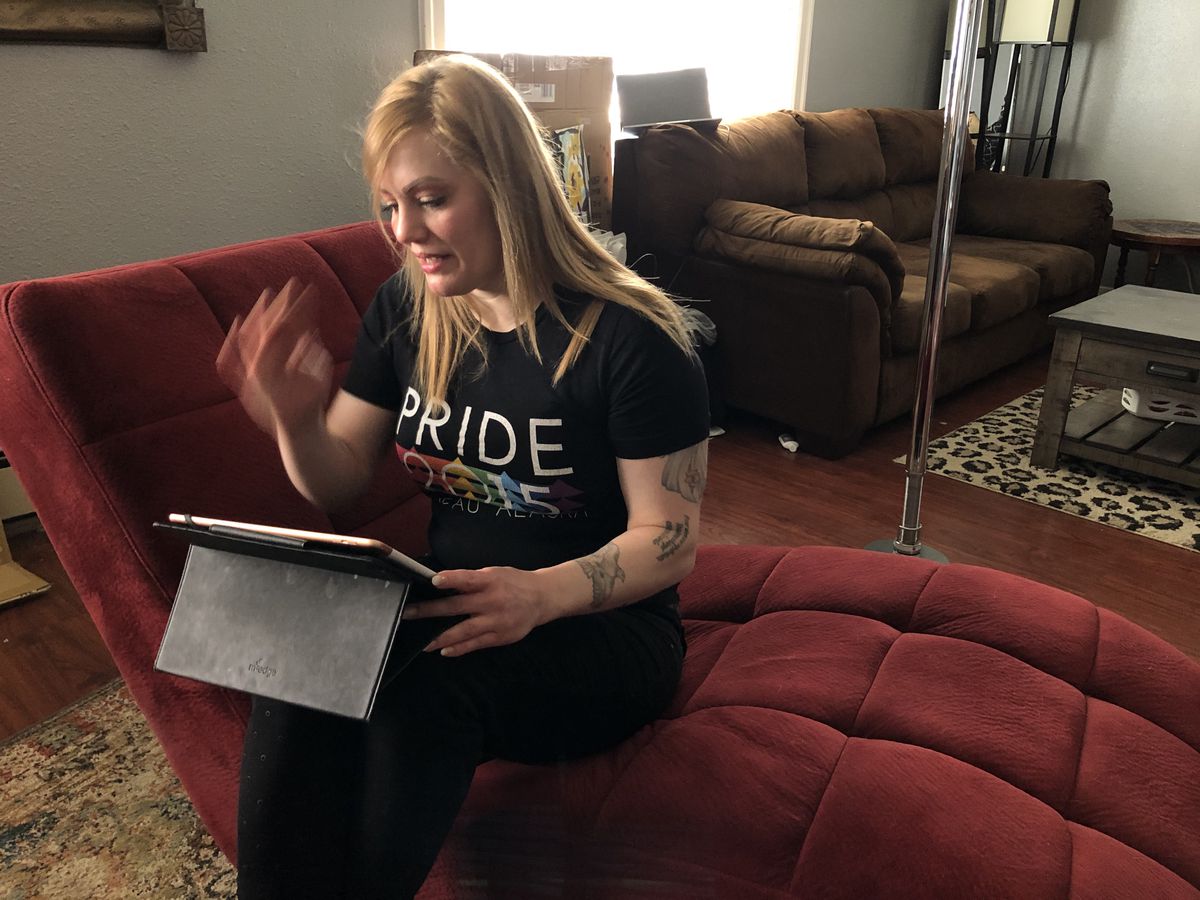 Rachael Byrd of Juneau is one of more than 30,000 Alaskans who have applied for unemployment in the past few weeks. Byrd, seen in her apartment Thursday, April 9, 2020, said she has been unable to reach unemployment officials by phone and is frustrated by changing rules and regulations. (James Brooks / ADN)

Rachael Byrd of Juneau is one of more than 30,000 Alaskans who have applied for unemployment in the past few weeks. Byrd, seen in her apartment Thursday, April 9, 2020, said she has been unable to reach unemployment officials by phone and is frustrated by changing rules and regulations. (James Brooks / ADN)

Alaskans applying for unemployment say they’re feeling frustrated by clogged phone lines, uncertain regulations and a confusing application process. On Thursday, for example, the Alaska Department of Labor said Alaskans can apply weekly for unemployment, instead of every two weeks, as had been the practice before now.

Meanwhile, the state agency in charge of unemployment has been scrambling to hire workers, upgrade equipment and implement a swath of rule changes ordered by elected state and federal officials. Relief and retroactive payments are coming, they say, but many Alaskans worry whether it will come in time for them to pay bills.

Hans Moody had worked for RavnAir, loading and unloading aircraft in Kodiak for 23 years. On Sunday, he learned along with the rest of the state that Alaska’s largest rural airline had declared bankruptcy. Moody, whose wife is collecting disability, joined more than 30,000 Alaskans who have filed for unemployment in the past three weeks.

“If I don’t get my unemployment, I don’t know what we’re going to do,” Moody said.

Three weeks ago, anticipating the surge to come, state officials urged Alaskans to file for unemployment online. That remains the advice today.

“The best thing people can do with unemployment claims right now is file online,” said Rep. Ivy Spohnholz, D-Anchorage and chair of the Alaska House’s committee on labor and commerce.

[More than 36,000 Alaskans file jobless claims in 3 weeks as coronavirus stifles the economy]

But if Alaskans run into a problem with that online process, they see a prompt that tells them to call the Department of Labor, and that has been a problem for many.

In Kodiak, Moody first filed for partial aid because he was told that his hours were being reduced. The next day, he was told he didn’t have a job at all. When he tried to update his application, the online process prompted him to call.

Three weeks ago, department officials said Alaskans could leave call-back numbers if they didn’t want to wait on hold, but the number of calls has grown so large that even that system has been overwhelmed. Now, callers say they’re hearing a prerecorded message that disconnects the phone line at the end.

That’s what happened to Kendra Skultka of Sitka, a former commercial fisherman who worked at a restaurant until it closed during the coronavirus pandemic.

“You can’t get through,” she said. “This is over a week into calling, and I still have yet to get through to anybody.”

Rachael Byrd, who was general manager of Juneau’s Salt restaurant, said she applied March 22 but ran into an issue.

“I kept calling and calling, never getting through — days in a row,” she said. “They’re so, so flooded with people.”

In Kodiak, Moody even tried the department’s fax number, without response so far.

Amanda Filori, a Juneau artist, offered a handful of tips that she said worked for her: Call early (call centers open at 9 a.m.), wait on hold, be polite and read the unemployment pamphlet before calling. She said she had the best luck calling the statewide toll-free number. There also are separate numbers for claim centers in Anchorage, Juneau and Fairbanks. She got her first deposit Wednesday.

In the past three weeks, 36,211 people have filed for unemployment insurance benefits, or more than 10% of all workers in the state of Alaska at this point in the year. Many more Alaskans are believed to be out of work but have not filed for one reason or another.

Labor Commissioner Tamika Ledbetter said Wednesday that “there are approximately 100 staff currently assigned to the processing of unemployment insurance claims.”

That includes normal technicians, people the department has reassigned, and six former employees who came out of retirement to help.

“An additional 75 staff will be hired this week,” Ledbetter wrote by email.

She also said that anyone whose application is delayed will receive retroactive payments effective as of the date they lost their job or had their hours reduced, back to March 1.

Sen. Click Bishop, R-Fairbanks, was commissioner of the state Department of Labor in 2010, the last time unemployment applications peaked. (That peak was less than a third of the current weekly volume.)

In 2010, it took four to six weeks to train additional staff needed to process claims.

“When I was commissioner during the Great Recession in 2008, we had one room on the second floor dedicated just for a classroom, training new claims takers,” he said.

This time around, Bishop said his former agency is also “looking at doing an accelerated version” of training for new workers.

Spohnholz said she was told the agency is also upgrading its phone and computer systems. A separate phone line, 1-866-377-0126, has been set up to help people who have technical problems with the online application system, rather than their particular application.

“I would tell people to keep calling. I know it’s frustrating, but it’s frustrating for (workers) too, because they’re breaking new ground. It is going to take them one, to three to four weeks on the outside to get this running. Once it does, it will be efficient,” Bishop said.

The complaints aren’t universal. Symaron George of Haines said her online application, filed March 30, went through “without a problem,” but she was disappointed that her payment did not include a promised federal stimulus or an extra payment approved by legislators. That extra payment was authorized for Alaskans who care for children or dependent adults.

“My unemployment just barely covered my electric with $20 left over for two weeks. It’s a scary and frustrating situation and more communication about it from the state would be nice,” she said.

On March 27, President Donald Trump signed the CARES Act, which would boost the maximum unemployment payment by $600, cover self-employed workers normally ineligible and extend the period that Alaskans can claim unemployment. Gov. Mike Dunleavy said Wednesday that payments will go out as soon as possible.

“CARES program coverage for the self employed will be operational in the next 3 to 4 weeks,” Ledbetter wrote by email. “Income verification, USDOL reporting agreements, staff training, and a new requirement to deduct federal withholding tax are currently in the works. Once operational, individuals may be eligible for $600 per week, plus the a state benefit which will closely mirror the current coverage for insured workers.”

Beau Sylte of Sitka said that can’t come soon enough. He managed to get through by phone but said that as a self-employed freelancer, the system wasn’t ready for him.

“It was a really frustrating call,” he said.

Though many changes are still in the works, Ledbetter said the department has already eliminated the requirement that Alaskans prove they are seeking work while unemployed and has waived a one-week waiting period for benefits.