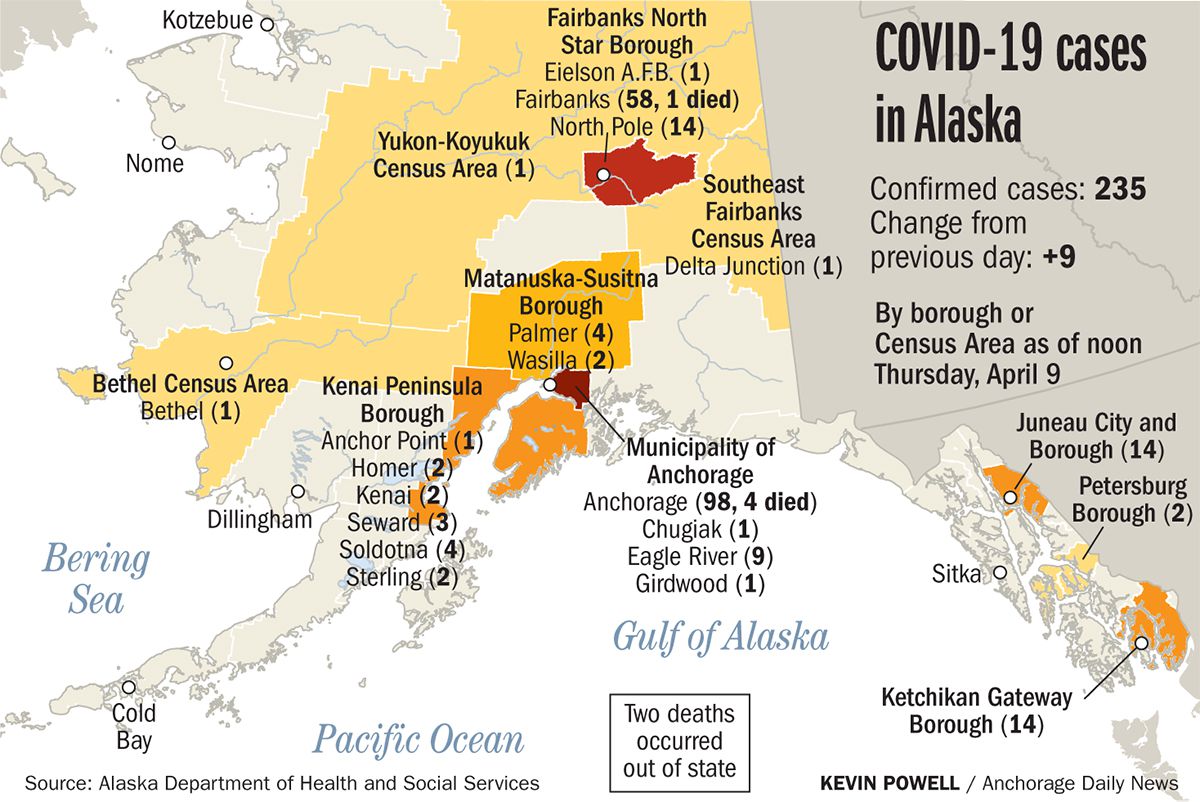 The number of Alaska’s confirmed COVID-19 cases reported Thursday rose by nine as state officials look to other sources for medical supplies after getting far fewer than expected from the federal government.

The new cases -- involving five more people from Anchorage, two from Fairbanks, one from Kenai and one from Wasilla -- increased to 235 the statewide tally of residents infected by the disease caused by the new coronavirus causing a global pandemic.

State officials on Thursday also announced that they were extending statewide stay-at-home orders and in-state travel limitations, which will be reevaluated by April 21, and extending a statewide K-12 schools closure through the rest of the school year.

The announcements come as President Donald Trump declared a major disaster in Alaska on Thursday, opening up federal funding for “State, tribal, and eligible local governments and certain private nonprofit organizations for emergency protective measures, including direct Federal assistance, for all areas in the State of Alaska impacted by COVID-19,” according to a prepared statement from the White House.

“We haven’t gotten all of those,” Zink said during a media briefing Wednesday night.

The state also loosened some COVID-19 testing guidelines on Wednesday. Among other things, the changes make it easier for staff and residents in health care centers and jails to get tested.

“These are by far the most broad guidelines of any state that I know of,” Zink said at a briefing Thursday.

The guidelines were broadened partially due to how Alaska is producing its own testing supplies, she said Thursday. Zink also said she thinks that since the percentage of people who test positive for the illness out of the total number of tests administered continues to rise, “the virus is getting ahead of our testing.”

The state is still working to build its supply of test kits, however.

The CEO of the only hospital in the Matanuska-Susitna Borough, Mat-Su Regional Medical Center, said at a press briefing Wednesday that Zink told him she’s hoping to get another 2 million test kits -- enough for three tests per Alaskan.

But for now, providers say they don’t have enough kits for even one per person.

“If we opened it up to everyone at this point, we would run out of test kits in approximately two days,” Dr. Wade Erickson, Capstone Clinic’s medical director, said at a briefing Wednesday. Capstone’s drive-up respiratory testing facility has 200 tests right now and the hospital has about 700, Erickson said.

“My concern is we need to ensure we have adequate test kit supplies before we liberalize our testing,” he said.

Zink said Thursday that the state has kept language in the broadened guidelines for continued clinical discretion.

One of the new cases is a female Wasilla resident in her 30s, according to state health officials. That brings the Mat-Su total to six. No confirmed cases there have required hospitalization.

Of the cases announced Thursday, Zink said those people had likely been exposed to the virus close to a week or week and a half before.

The Fairbanks area now has 73 confirmed cases, several of them at the Denali Center care facility. A total of four residents and six employees have tested positive for the virus. All staff and employees were tested and all the results are back, an administrator said this week.

The Denali Center is the only long-term care facility in the state with any residents or staff who have tested positive for the illness, Zink said on Thursday.