9th Alaskan to die from COVID-19 is Mat-Su woman in her 30s; first case announced in Bering Strait region 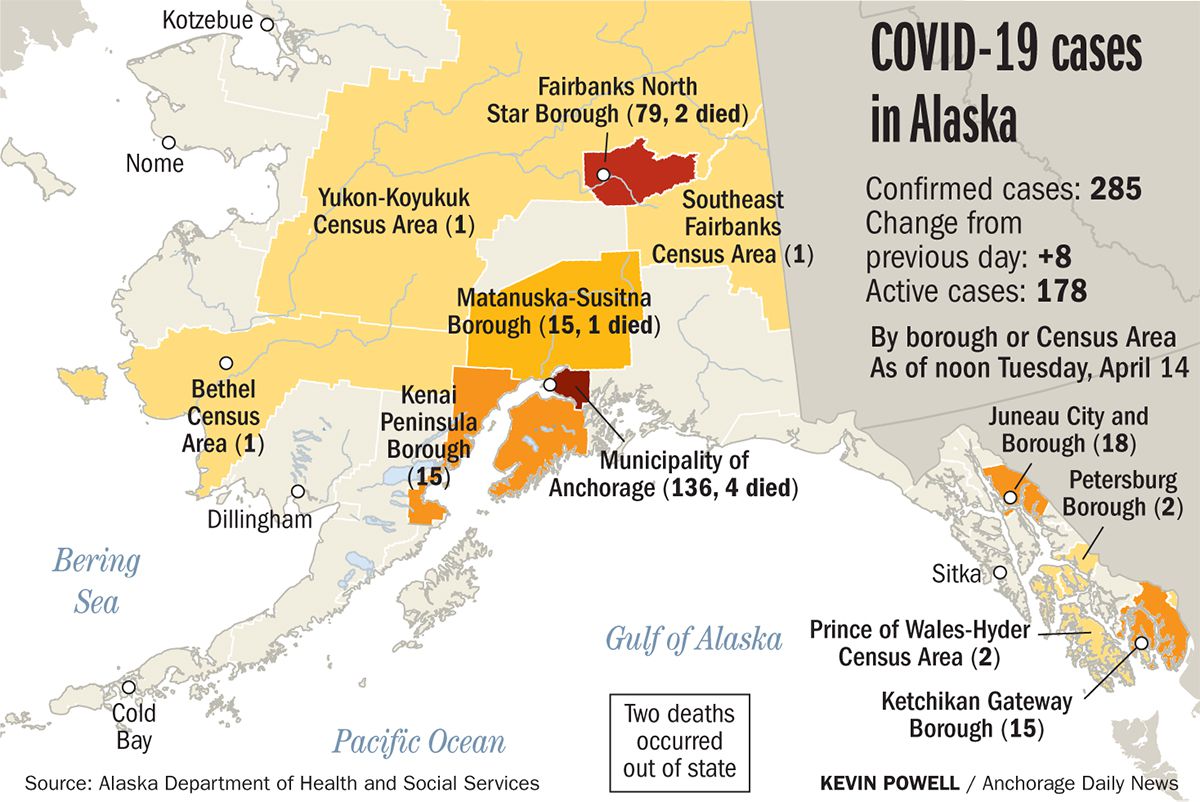 State-reported data on COVID-19 cases in Alaska, based on residency.

State-reported data on COVID-19 cases in Alaska, based on residency.

A 33-year-old Wasilla woman has died from COVID-19, becoming Alaska’s ninth victim of the virus and the first fatality in the Matanuska-Susitna Borough, new state data shows.

State health officials also reported eight new confirmed cases of the infectious disease caused by the novel coronavirus. Alaska now has 285 total cases, according to an update Tuesday from the Alaska Department of Health and Social Services. No new hospitalizations were reported as of midnight Tuesday.

Ninety-eight of those patients are considered recovered.

After the state reported the new cases, Gov. Mike Dunleavy said officials will lift a temporary ban on elective medical procedures and allow to-go alcohol sales as part of a larger effort to help Alaska’s economy during the pandemic. The restrictions on non-urgent medical procedures were enacted among concerns about a potential shortage of protective medical equipment. On Tuesday, both Dunleavy and Zink said those concerns have eased, but the state will monitor the situation closely to determine whether stricter measures must be reinstated.

Meanwhile, the first confirmed case of COVID-19 in the Bering Strait region was announced by Norton Sound Health Corp. on Tuesday afternoon.

Hospital spokeswoman Reba Lean declined to note which community the patient is from, citing patient privacy concerns, but said the patient has been self-isolating. The positive case will be included in case numbers released by the state Wednesday because it was confirmed after the daily reporting deadline.

Lean said all village clinics in the Bering Strait region have the ability to test for the virus.

The eighth case involves a person who lives in Juneau. Local officials said Monday that person is the fourth correctional officer at Lemon Creek Correctional Center to contract the virus.

The state reports cases based on the residency of the person who tested positive for COVID-19, and its data does not necessarily reflect where someone was when they tested positive or where they became ill.

Of the eight new cases, four of the people who tested positive are male and four are female, Zink said Tuesday. Four are in their 20s, three are in their 30s and one is in their 40s, according to Zink.

A total of 40 workers at the prison have been tested for the new coronavirus, along with four inmates, the department said. No inmates have tested positive as of Tuesday, according to corrections department spokeswoman Sarah Gallagher.

The corrections department said any inmate awaiting the results of a test lives in a “designated isolation cell” and would be kept away from the general population until cleared by doctors.

Prisoner advocates have warned that the coronavirus could spread quickly within the confines of a prison. Lemon Creek has a capacity of 223 inmates, male and female, and employs 73 people. According to Alaska Justice Information Center data, the prison was over capacity for 16% of the time between the beginning of the year and end of March.

Correction: This story has been updated to show there were eight new coronavirus cases announced Tuesday, not seven.