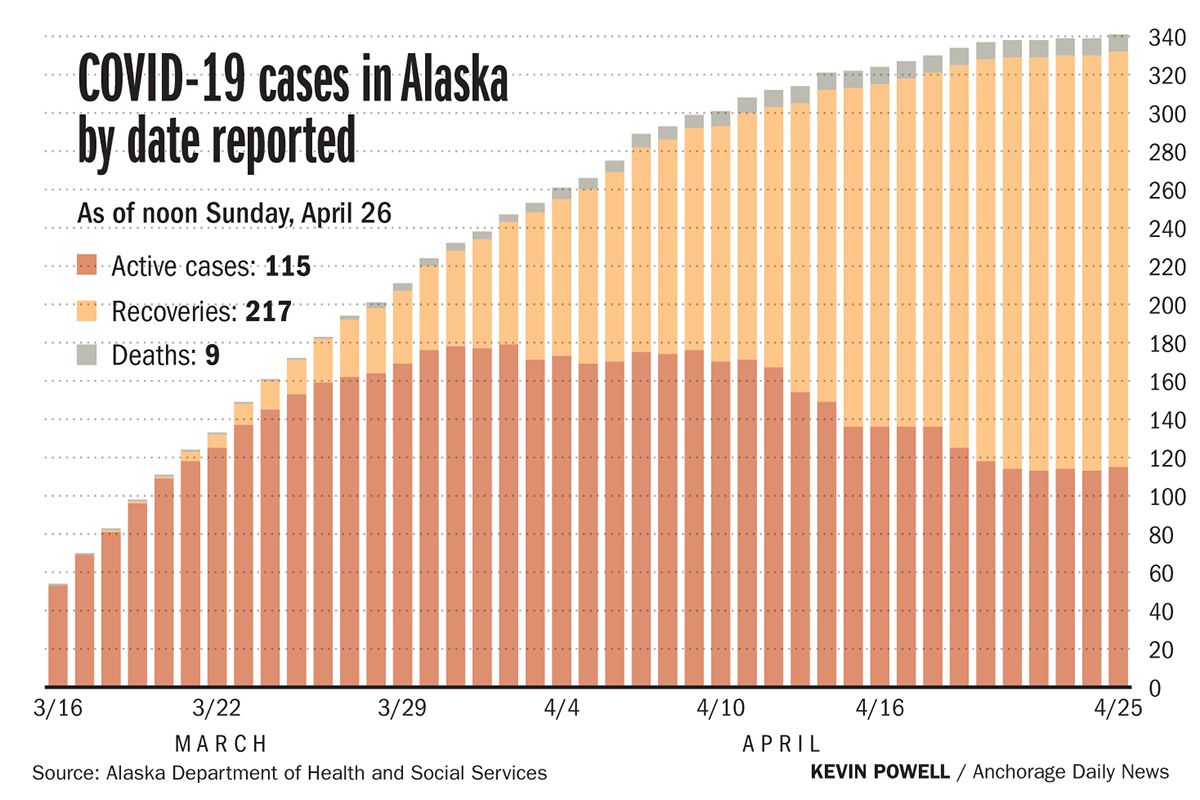 In the weeks since restaurants closed, layoffs rippled around the state and normal life in Alaska came to a grim halt, a global pandemic has raged on.

The number of positive COVID-19 cases in Alaska has been declining, but that doesn’t tell the entire story of the spread of the new coronavirus in the state.

Much remains unknown about COVID-19.

A sudden increase in cases — a sharp, upward leap on the graph of cases — would likely drive up the number of people who need beds in intensive care units or one of the state’s limited number of ventilators.

Alaska’s positive cases are lower than most other states, both in cases per 100,000 people and the actual number of those who have tested positive. The total number of cases here stood at 341 at midday Sunday, with nine deaths.

A combination of swift identification of cases and ensuing investigations — tracking the contacts of people who have tested positive for the virus and asking them to quarantine — alongside mandates enacted by officials to slow the spread, have helped keep that curve flattened, said state epidemiologist Joe McLaughlin.

And Alaskans have taken the illness seriously, he said.

But there are caveats that come with the decline in daily case counts, McLaughlin said.

Some people can walk around with COVID-19 but not know it. They might not experience symptoms but could spread it to others. That means there are likely people out there with COVID-19 who haven’t been surveilled by the state’s tracing team, McLaughlin said, and they aren’t showing up in case counts.

There’s also a reporting lag when it comes to positive results making their way to public health officials’ attention. Someone may take days to start showing symptoms, get tested and then wait more days to get results, McLaughlin said.

And as the number of tests performed throughout the state continues to climb, officials will likely detect more cases, which would in turn drive up daily case counts, McLaughlin said.

Looking at hospitalizations and deaths in addition to daily case counts can help understand how the virus is spreading in Alaska, said Tom Hennessy, an infectious disease epidemiologist and affiliate faculty member at the University of Alaska Anchorage.

But deaths often occur weeks after someone was initially exposed, as do hospitalizations, so those give later indications of how the disease has spread. They’re all indicators that look backward, and rely on widespread testing, he said.

“If you add those pieces together — if you say, our hospitalization rates are going down and our case numbers are going down — those are indications that we’re making progress,” Hennessy said.

In addition to Alaska’s downward trend of daily cases and the fact that deaths aren’t increasing, there are estimates showing that the state’s reproductive number is declining. The reproductive number — or R0, pronounced “R naught” — is the average number of people infected by a single person, Hennessy said. It’s tough to calculate but important in understanding how many people are getting sick.

“I think we have evidence to indicate that with a pretty high degree of certainty that we’re flattening the curve," Hennessy said. "Everything’s pointing in that direction.”

But if someone wants 100% certainty that the curve is flattening, Hennessy said, “they should wait longer."

Flattening Alaska’s curve has bought the state time, Hennessy said, to build up stores of personal protective gear and to observe how other places are dealing with the outbreak.

The state has avoided exponential growth of the illness, in which cases would double daily from two to four to eight to 16 cases and lead to an overwhelmed health care system, Hennessy said.

“You can’t know exactly what would have happened, but I think the early action kept us from jumping on that really steep upward curve that this virus takes when it runs its natural course,” Hennessy said.

‘All models are wrong but some are useful’

Still, hundreds of Alaskans have gotten sick from the virus through community spread and travel, including nine who have died from it. Like many other places worldwide, COVID-19′s deadly toll hasn’t skipped Alaska.

In the initial stages of the pandemic, projections about where the disease might go showed a potentially frightful outcome, depending on steps that were taken to slow the spread of the virus.

In late March, researchers at the University of Alaska Anchorage, including Hennessy, presented a report of COVID-19 models to Gov. Mike Dunleavy and Anchorage Mayor Ethan Berkowitz. The models showed how the virus might reverberate around Alaska for several months.

Models aren’t crystal balls. They’re based on educated assumptions researchers make, Hennessy said, and since COVID-19 is still so new to the scientific community, there are a lot of limitations to what the models can say.

Hennessy said he thinks about a quote from the mathematician George Box, who championed American modeling: “All models are wrong but some are useful.”

The model Hennessy and others compiled projected several scenarios for Alaska’s curve. One looked at what might happen if life continued as normal.

“That looked really awful,” he said.

Actions were already being taken to avoid that situation when the report was published, he said, but it offered insight into what might have happened.

The report looked at a “China-style lockdown,” which the researchers knew was unlikely in Alaska. The report also showed what could happen with just social distancing, and “that showed a pretty bad outcome also,” Hennessy said.

Another scenario graphed in the report showed what could happen with shelter-in-place orders.

“That showed that there was a scenario out there that we could reduce transmission enough to stay under our health care capacity and buy time,” Hennessy said.

Initially, the state used long-term models, like the one from UAA, to look at worst-case scenarios, said Jared Parrish, senior maternal and child health epidemiologist at the Alaska Department of Health and Social Services. The longer-term projections helped them understand how to plan for those worst-case scenarios.

Now the state is using models that project out a week or two in advance and using recent data to see what could come next and how Alaska is doing in terms of the virus’s spread.

As things begin to open up again, Parrish said, the short-term models “can be reactive to detect spikes quickly or changes quickly.”

Short-term models help inform decisions about where the state could be headed — that the state can continue on a trend for a certain amount of time, but if the growth rate speeds up, then things might need to change, Parrish said.

Looking ahead, the state will continue determining not just how many cases there are, but also how those cases were acquired in addition to the speed at which the state’s curve goes up, the state’s chief medical officer, Dr. Anne Zink, said Tuesday.

“It’s much less about the number of cases,” Zink said. “It’s much more about how quickly those cases are growing.”

The quicker the curve goes up, the more it can begin to climb exponentially, Zink said. It’s also important to make sure there’s enough testing to find those new cases, she said.

“Once you start to get in that exponential growth curve," Zink said, "you can go from having a few cases to being completely overwhelmed with cases in a short period of time.”