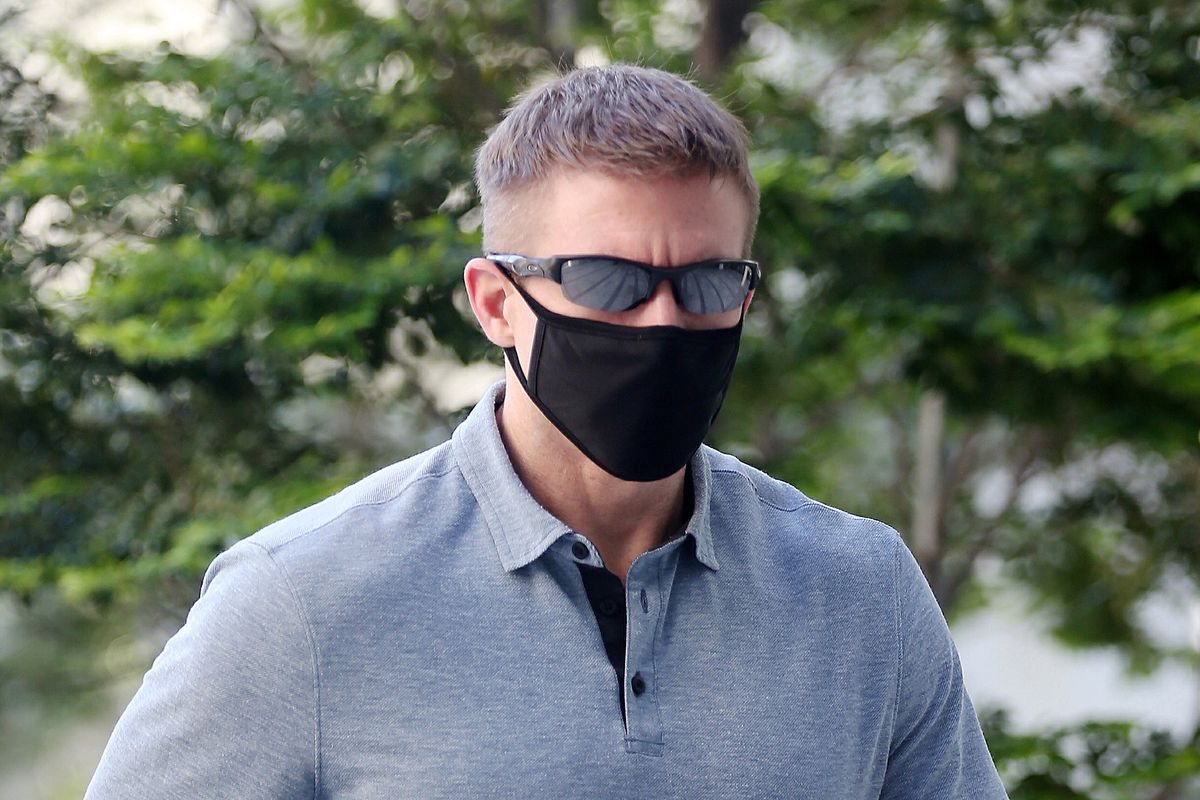 In this May 13, 2020, photo, Brian Dugan Yeargan, wearing a face mask and sunglasses, walks outside the Singapore State Court in Singapore. The 44-year-old American pilot has been jailed for four weeks for breaching a quarantine order in Singapore. Local media reported that Brian Dugan Yeargan was sentenced by a court Wednesday, May 13 for leaving his hotel room for three hours to buy masks and a thermometer. (The Strait Times via AP)

In this May 13, 2020, photo, Brian Dugan Yeargan, wearing a face mask and sunglasses, walks outside the Singapore State Court in Singapore. The 44-year-old American pilot has been jailed for four weeks for breaching a quarantine order in Singapore. Local media reported that Brian Dugan Yeargan was sentenced by a court Wednesday, May 13 for leaving his hotel room for three hours to buy masks and a thermometer. (The Strait Times via AP)

A FedEx pilot from Eagle River is serving a four-week sentence in a Singapore jail for breaching a COVID-19 order to spend two weeks in his hotel room upon arrival.

The case of the American pilot jailed for violating foreign coronavirus protocols generated a brief sensation in Southeast Asian news outlets when the case broke.

Brian Yeargan, 44, arrived in Singapore from Australia in early April, according to immigration authorities. He went to jail this week, family members in Alaska said.

The last time Yeargan’s parents, Jim and Pam, talked with their son was Mother’s Day. They’d chatted a few times before that while he was holed up in his room.

“He’s always sounded pretty good,” Jim Yeargan said Thursday, adding that his son was trained as a U.S. Army Ranger. “That tends to make you tough. He’s taking care of himself.”

But, Jim Yeargan continued, his son was also concerned about his family back home — he lives in Eagle River with his wife and two sons — and had already spent a month alone. He never experienced any COVID-19 symptoms.

Relatives haven’t spoken with him since his incarceration started.

The case began just after the Alaska pilot landed April 3 in the prosperous city-state between Malaysia and Sumatra — the very day Singapore announced strict “circuit breaker” measures to curb rising COVID-19 infections. More than 7,000 breaches were reported that day alone. Cases surged about two weeks later, and then declined.

Singapore was reporting just over 1,000 hospitalized COVID-19 patients and 21 deaths as of this week. Another 19,000 were deemed clinically well but staying in isolation facilities because they still tested positive for the virus.

Brian Yeargan was in Singapore on a short-term visit pass and was issued a stay-home notice that meant he couldn’t leave his room until April 17, authorities say. It wasn’t clear how long he was expecting to stay. FexEx declined to discuss his itinerary.

“Ignoring the stay order, he left his room at the Crowne Plaza Changi Airport hotel around 11.15 am on April 5,” Singapore-based newspaper The Straits Times reported. Authorities checked the hotel 15 minutes later and found him gone.

Yeargan pleaded guilty in late April to one count of breaching the order, according to multiple media reports. At a hearing, however, Yeargan told a judge he didn’t get a physical copy of the stay-home notice.

During court proceedings, a prosecutor told the judge Yeargan walked to the airport station, took a train to the busy City Hall station, and walked about 30 minutes to a shopping mall, media reports said.

Yeargan recalled there were about 1,000 people at the station and 10 to 20 people at each shop he visited, according to an account in Channel News Asia. He bought a thermometer and a few boxes of face masks at four stores; at that point, it was difficult finding such supplies in Alaska.

His lawyer said he wore a mask on the trip.

As he walked to another train station, someone from FedEx called and told Yeargan to go back to his room, reporters covering the proceedings wrote. He got a taxi right away.

Prosecutors requested a six- or eight-week sentence, saying Yeargan could have shopped after April 17 or with help from FedEx, the reports said. Yeargan’s lawyer said his client made a mistake and was “worried about the well-being of his wife back home."

Yeargan also addressed the court, saying he made a poor choice, Channel News Asia reported. “I’d like to humbly offer my apologies and say I have the highest regard for the Singapore people and its laws.”

Singapore’s corrections system is largely concentrated in one vast prison housing 23,000 inmates described as “a high-rise, high-tech and claustrophobic facility where prisoners rarely see the sunlight” by Prison Insider.

Information about where Yeargan was housed was not immediately available. The U.S. Embassy in Singapore did not respond to specific questions.

His father said he didn’t know.

The Yeargans have lived in Eagle River for nearly 50 years. Jim worked as a teacher and as principal of Lumen Christi High School. Pam was a popular teacher at Homestead Elementary.

Brian Yeargan attended Chugiak High School, joined the U.S. Army, and flew fighter jets in the U.S. Air Force, his father said. He worked for Alaska Airlines before taking the position at FedEx, and serves with the Alaska Air National Guard.

A FedEx spokeswoman in Memphis confirmed Yeargan’s status as an employee.

"FedEx adheres to all regulations and guidelines from government authorities related to the containment of COVID-19, and ensures that it takes the necessary steps to maintain the high standards of behavior expected of our employees to protect the health and safety of our team members and the communities in which we serve,” spokeswoman Davina Cole said in an email.

Yeargan faced maximum penalties of being jailed for up to six months and fined just over $7,000.

Alaska’s first confirmed COVID-19 case was a foreign national cargo pilot who traveled from Ted Stevens Anchorage International Airport to a hotel room before realizing he was sick.