2 of Alaska’s biggest Memorial Day events have been canceled, but others will go on 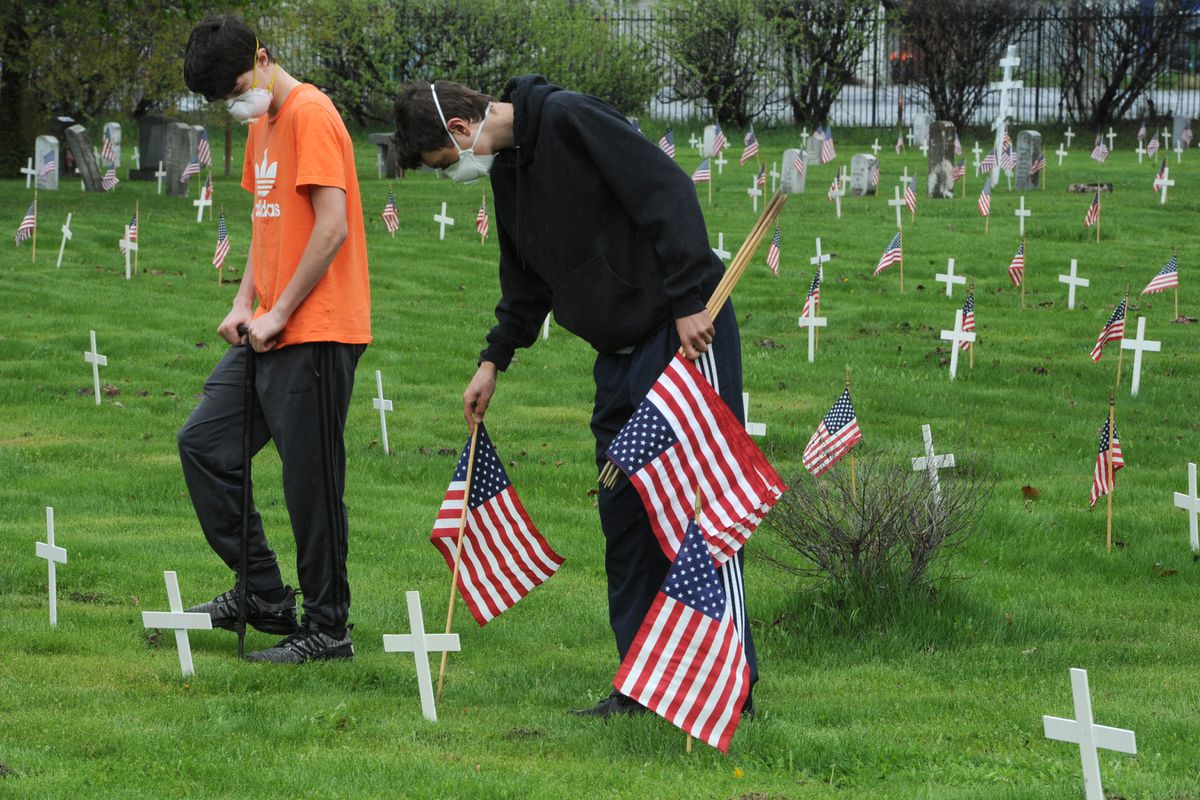 Alan Padgett, 14, left, makes a hole as his brother Ryan Padgett, 16, places a flag at Anchorage Memorial Park Cemetery on Sunday, May 24, 2020, in preparation for Memorial Day on Monday. Ryan said it's a way to 'remember the people who served.' (Bill Roth / ADN)

Alan Padgett, 14, left, makes a hole as his brother Ryan Padgett, 16, places a flag at Anchorage Memorial Park Cemetery on Sunday, May 24, 2020, in preparation for Memorial Day on Monday. Ryan said it's a way to 'remember the people who served.' (Bill Roth / ADN)

A spokeswoman with the office of Mayor Ethan Berkowitz confirmed that all of the city’s Memorial Day ceremonies have been canceled because of the coronavirus emergency. The event on the Park Strip typically draws a large crowd and includes a wreath-laying ceremony and military and civilian speakers.

Anchorage may be moving into the next phase of reopening next week, according to officials, which would allow for larger crowds to assemble. But the municipality is currently in phase 2 of its “Roadmap to Reopening” plan, which does not allow gatherings of more than 50 people.

The event at the Fort Richardson cemetery was canceled along with public ceremonies at all veterans ceremonies nationwide, according to the the National Cemetery Administration.

More than 1,000 people typically show up for the Fort Richardson ceremony, especially if the weather is nice, according to Virginia Walker, cemetery director.

Walker said that a big concern is not just the safety of the people who come to observe the ceremony, but the volunteers it takes to place flags on gravesites and do other parts of the event each year.

Since people won’t be able to visit the cemetery, staff will broadcast the ceremony over the Anchorage VA Facebook page, including a sounding of taps, rifle salute, wreath laying and speeches, Walker said.

Here are a few events in Southcentral Alaska that are still going forward.

After much discussion, the American Legion Jack Henry Post 1 will have its annual ceremony placing crosses on veterans’ gravesites and its Memorial Day Barbecue for members, said post commander Michael Downs.

“We’ve done the Memorial Day barbecue at this post probably for a hundred years. Our board felt it was important to do it and follow all the rules we can,” Downs said.

Downs said they’re taking local mandates seriously and watching closely for any updated guidance from the municipality as it gets closer to the holiday weekend about public gatherings.

On Sunday, the American Legion will place crosses and the VFW Post 1685 will place flags on veterans’ gravesites at the Anchorage Memorial Park Cemetery (535 E. 9th Ave.) from noon-3 p.m. There will be a small ceremony at the veterans’ flagpole at noon. To participate in placing crosses, contact Downs at 907-272-5242, email alaskapost1@gmail.com or stop by the American Legion Post 1.

The annual barbecue is open to members, guests and auxiliary members and will be from 1-5 p.m. Monday at the post, 840 W. Fireweed Lane. It’s free and donations are accepted.

There will be a Memorial Day celebration at 1 p.m. Monday, May 25 at the Veterans Wall of Honor, “with a few changes in face of the COVID-19 pandemic,” according to a May 20 blog post by Casey Ressler, communications manager with the Mat-Su Convention and Visitors Bureau.

Ressler wrote that there will be bleacher seating available and that dignitaries will be seated and participate in the ceremony.

“Originally, organizers were going to have everyone remain in their vehicles and broadcast the ceremony over FM radio, and that still is being offered and encouraged to promote social distancing,” Ressler wrote.

American Legion Post 15 will lay crosses and flags on veterans’ gravesites on Saturday, May 23. Participants will pick up crosses at the post (1550 S. Mystic Circle) at 10 a.m., then meet at the Palmer Cemetery. At 11 a.m. they’ll continue on to the Butte cemetery. Contact Jerry Hoskins for details: 907-250-3458.

Victoria Barber is the features editor at the ADN. Contact her at vbarber@adn.com.