The Canadian border is closed, but Alaskans in the Lower 48 can still drive home. Here’s what to expect. 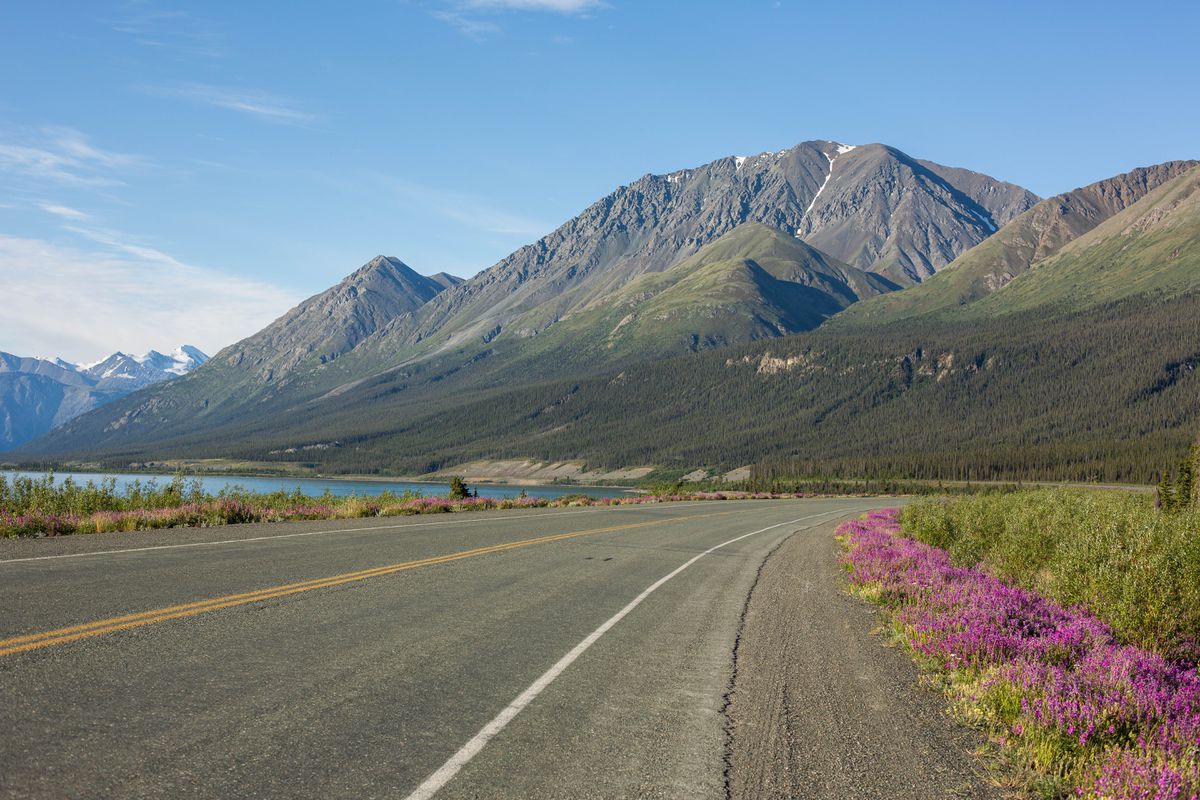 The Alaska Highway runs along Kluane Lake near Destruction Bay in the Yukon territory on June 29, 2015. (Loren Holmes / ADN archive)

The Alaska Highway runs along Kluane Lake near Destruction Bay in the Yukon territory on June 29, 2015. (Loren Holmes / ADN archive)

The Canadian border has been closed since late March to all nonessential traffic due to the coronavirus pandemic, leaving many Alaskans wondering how to get home from the Lower 48. It is still possible for Alaska residents to drive through Canada, however.

It is also possible for people relocating from Alaska to the Lower 48 — or vice versa — to make the drive.

But to drive through Canada, you must be healthy, with no COVID-19 symptoms, and traveling for a “non-discretionary purpose," according to Mark Stuart, spokesman for the Canada Border Services Agency.

No non-discretionary travel means no optional travel, such as tourism and recreation. That restriction is in place until July 21 and “can be prolonged as necessary for public health reasons,” Stuart said.

But not everyone can fly to Alaska. Some people have pets or a vehicle they need to bring home, or a U-Haul full of belongings to tow.

Here’s what anyone attempting the drive to or from Alaska right now should expect.

Crossing the border into Canada

There are several ways to drive to Alaska. But right now, it’s best to spend the least possible amount of time in Canada, so cross the border as far west as possible if you’re driving from the eastern U.S.

That means crossing from Washington or Idaho into British Columbia, or from Montana into Alberta.

At the border, you’ll need all the proper documentation, including your passport. And you’ll also need to provide information detailing why you are exempt from the border closure, Stuart said.

“Travelers are encouraged to have documentation that will demonstrate their reason for travel and length of stay, as well as any other information that may be relevant to substantiate how they meet the exemption,” Stuart said.

The final decision on entry is made by the Canada Border Services Agency officer, based on the information available at time, Stuart said.

Sarah Mariner has lived in Alaska since 1993 but drove home from the Lower 48 last week. She flew to Portland, Oregon, last week to drive her daughter, who just graduated from college, and a U-Haul home to Alaska.

Mariner cautions that Alaskans need to be ready to make a convincing case to a Canadian border patrol officer on why their travel is non-discretionary.

In Mariner’s case, she carried her passport, an Alaska driver’s license, recent bills from her house in Anchorage and her daughter’s birth certificate and college diploma.

“I brought anything I could think of that would support my story of what I was doing,” she said. The officer asked to see only their passports and driver’s licenses, she said.

When the officer asked her where she planned to sleep during the trip, Mariner gestured to the back of her car. He also asked her whether she had enough food in the vehicle for the journey, she said.

Her daughter’s vehicle also has Alaska license plates, and that didn’t hurt, she said.

Border officers are screening all travelers with a series of questions about physical health, and anyone with symptoms similar to COVID-19 will be turned away, Stuart said.

Officers ask, “Do you currently have a cough, difficulty breathing, or feel you have a fever?” They are also trained to notice visible signs of illness and can turn travelers away at their own discretion, according to the agency’s enhanced border measures.

After crossing the border, Mariner was directed in her vehicle to a tent, where another person handed her papers with information on the necessary precautions to avoid spreading or getting the coronavirus while in Canada. At the tent, the person also photographed their driver’s licenses, Mariner said.

What to know while driving through British Columbia or Alberta

At the border, Mariner was advised to social distance as much as possible while in Canada.

All travelers are required to carry nonmedical cloth masks and should wear them when in a public area, Stuart said.

Travelers are asked to limit their stops for essential reasons only, like using restroom facilities. They should try to pay for gas at a pump when possible, get food only via drive-thru and avoid all contact with other people, Stuart said. They should carry enough food in their vehicle to make the drive without going into a grocery store.

All of the provincial campgrounds in British Columbia and Alberta are closed to nonresidents, so travelers should be prepared to sleep in their vehicle or stay in lodging like a motel.

“For any period of time in which they are not traveling, for example, if required to spend the night in a hotel, then travelers are required to quarantine,” Stuart said.

That means staying in the hotel room and not interacting with other people except to check in and check out.

Areas of Canada can be remote, with services spread many miles apart. It’s wise to carry a gas can with a few gallons of fuel. Mariner missed a gas station on the Cassiar Highway and had to stop and use her extra fuel.

Most places along the highways are open, she said, but some are closed or have reduced their services and those dedicated to tourism are closed. Additionally, many Native villages have barred their entrances to travelers, she said.

One bright side: There’s little traffic and plenty of wildlife to see, Mariner said.

Getting through the Yukon

You will have 24 hours to get through the Yukon territory, about 575 miles on the Alaska Highway.

The territory passed an emergency order in April requiring anyone entering the territory to self-isolate for 14 days or to drive straight through.

“Twenty-four hours is realistic, but it doesn’t give you any spare time,” Mariner said.

Anyone arriving in the territory will encounter a checkpoint near the Yukon border. There, you will have to give an enforcement officer a signed declaration that includes your name, address, cellphone number and travel plan. The officer will also provide information on what routes you can drive and what establishments you can enter.

It is possible to stay overnight in a Yukon hotel, but travelers should stay out of rural communities and avoid traveling into downtown Whitehorse, according to the Yukon’s guide for travelers.

And when stopping for gas or food, be sure to stay 6 feet away from other people, the guide cautions.

Airports are providing vouchers to inbound Alaska air travelers who choose options that require additional testing. And for those arriving by plane who did not take a test before traveling, the state is providing tests at airports.

But for now, no tests are available at the Alaska-Canada border, according to Clinton Bennett, Alaska Department of Health and Social Services spokesman.

“At this time the state of Alaska is focusing on making sure the testing at our airports is running as smooth as possible,” Bennett said. “The goal is to eventually stand up a similar system at the Alaska borders with potentially some adaptations for that method of transportation.”

But that border process is still under discussion, he said.

That means anyone entering Alaska from Canada will need to avoid interacting with other people while traveling through Alaska and head straight to their destination.

Border stations are also not providing vouchers for further testing to travelers who tested negative before entering Alaska, Bennett said.

A 14-day quarantine is required for anyone entering the state who has not been tested and does not take a test upon arrival.

Anyone entering the state must also complete a travel declaration form that specifies their testing status. Bennett said the process for collecting those forms from people driving into Alaska awaited finalization, though travelers may access the declaration form online and submit it to traveler@alaska.gov.

Finally, keep in mind that if you’re traveling to Anchorage, the municipality has its own policy for anyone arriving in the city from out of state.