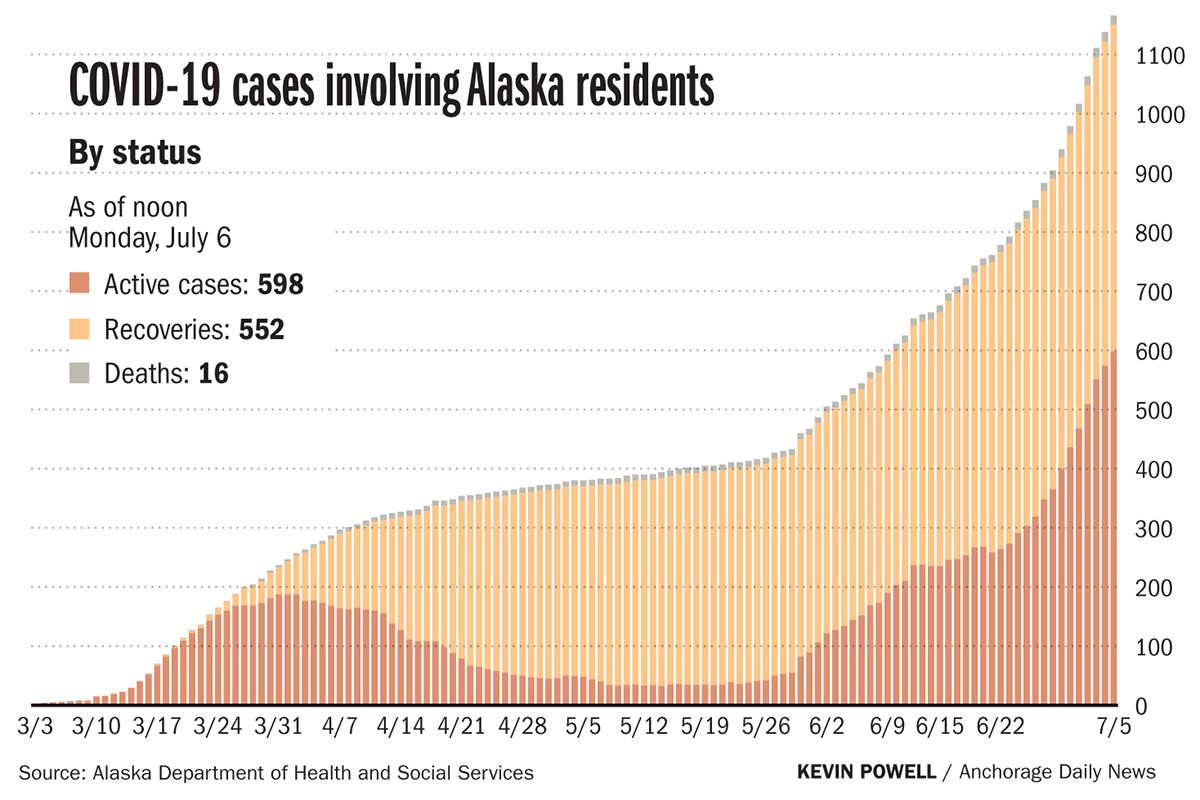 The number of people hospitalized with COVID-19 in Alaska hit a new high, with 16 residents sick enough to require medical attention as of Monday.

The state also logged a new record of 622 residents with active infections, while 526 people have recovered from the virus. As of Saturday, there were more infected Alaskans than recovered ones for the first time since the pandemic spiked here in April.

It wasn’t clear how many of the people with active infections are showing symptoms or, if so, how sick they are.

But the Alaska State Hospital and Nursing Home Association on Monday reported 16 people positive for COVID-19 who are hospitalized, the largest number reported since March, state officials say. There are 25 people hospitalized with either a positive diagnosis or a case under investigation.

Until then, the number of hospitalized coronavirus patients in Alaskas remained in the single digits on any given day, according to hospital association data. As last week began, there were anywhere from three to five COVID-19 hospital patients each day.

Alaska logged single-digit daily case increases for weeks until the state lifted most coronavirus restrictions in late May. Officials blamed Memorial Day gatherings for a number of new cases. Testing requirements for seafood industry workers and incoming travelers also led to a spate of positive results.

Nine of the 16 people hospitalized with coronavirus on Monday were in Anchorage hospitals. Four were in Mat-Su, two in Fairbanks, and one in a region including the Kenai Peninsula, Cordova and Valdez.

The numbers are small compared to more populated states with surging COVID-19 cases like Texas or Arizona. And Alaska’s overall hospital capacity for now remains healthy in terms of beds including in the ICU, Kosin said.

What he and hospital CEOs and administrators are watching is the combination of rising patient numbers and the state’s growing COVID-19 cases. If the patient counts start increasing rapidly, that could stress hospital capacity and trigger surge plans, Kosin said.

“The good news is capacity is still intact ... but obviously we do not want to see hospitalizations with COVID going up,” he said. “It’s not what we want. And they are starting to go up.”

Sixteen Alaskans have died with the virus. The state reported two new hospitalizations on Sunday, for a total of 74 since the pandemic began in March.

The new hospital count comes as confirmed cases of COVID-19 in Alaska continue to rise and health workers can’t keep up with the contact tracing that’s considered an integral part of the state’s strategy to contain the virus.

The state reported 30 new infections reported in Alaska on Monday, including 28 residents and two nonresidents, according to the Alaska Department of Health and Social Services COVID-19 dashboard.

Nineteen of the new cases were in Anchorage. There was also one new case each in Kenai, Seward, Sterling and Wasilla, with three new cases reported in Fairbanks, and two in North Pole.

In Alaska’s largest city, where the majority of recent coronavirus cases have been identified, local health officials said over the weekend they are no longer able to keep up with current demand for contact tracing. The influx in cases has put a stress on the system, the Anchorage Health Department said in an update sent out on Sunday.

“Our cases are increasing, our public health staff is exhausted, and people are having bigger and bigger group gatherings,” Zink said during a Senate roundtable. “It used to be to get four or five contacts, and now you have 50 or 100 or ‘I don’t want to talk to you on the phone.’ And so the ability to trace is becoming incredibly challenging.”

Part of the problem is a lack of resources, officials say. Last week in Anchorage, just 15 municipal workers were tasked with monitoring more than 500 people who had tested positive for the virus or may have come into close contact with someone who had, according to the health department update. There’s currently a two- to three-day delay in conducting interviews of new cases to determine how they became infected, and who they might have contacted.

“It takes a long time to interview each case and collect all their information and contacts,” Dr. Bruce Chandler, the city’s chief medical officer, said at a community briefing last week. “It’s not one short phone call and you’re done.”

The percentage of tests that came back positive, however, increased only slightly last week, at 1.6 percent, up from .8 percent from the week before.

There were eight new cases in Bristol Bay Borough seafood industry workers between July 1 and July 4 as reported Monday by the Camai Community Health Center Inc. in Naknek. None have COVID-19 symptoms and all have been quarantined since arriving in the borough, center officials say. Their positive results came during required testing for seafood processors.

The Kenai Peninsula city of Seward rose from a handful of cases in early June to 43 this week including two new cases reported Monday by the state and a third reported by city officials.

Since the pandemic began, there have been 1,166 COVID-19 cases confirmed in Alaska including 955 residents and 239 nonresidents.