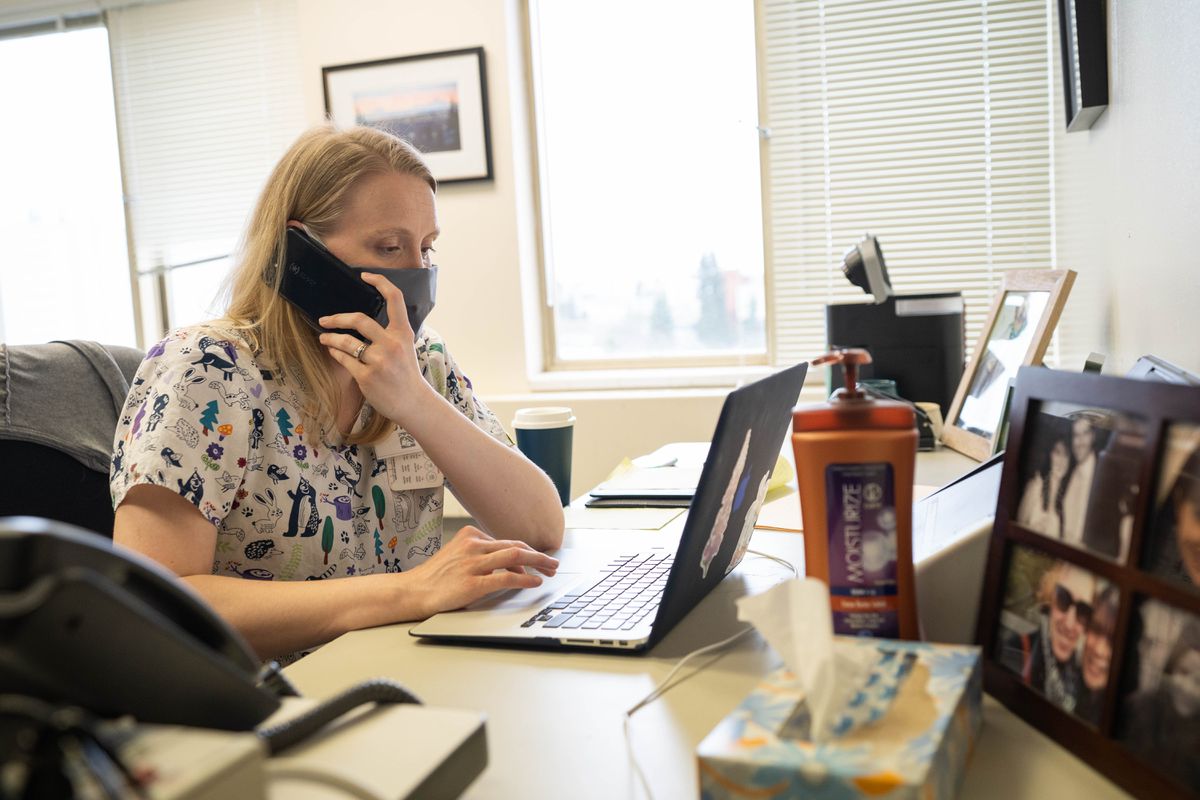 Cases in Anchorage among both residents and visitors continue to climb as people mix in groups and go out more. The growth in virus cases is straining the system, officials said, as both the city and the state are trying to expand capacity.

“The public health tracing capacity is at its max at the local level,” Anchorage Health Department Director Natasha Pineda said during a community briefing Wednesday.

Investigating recent cases of the virus and tracking their contacts is a key component in helping limit the spread of COVID-19.

Reaching that maximum threshold prompted the city to shift its public health capacity metric from yellow to red on Wednesday.

Since Friday, Anchorage saw 70 new local cases, Pineda said. That’s a jump from the 51 cases the city had seen between June 17 and June 24, and it happened in only six days, Pineda said. Those cases drove Anchorage’s total local cases up to 457, with 231 recoveries, she said.

And that means the city is monitoring 561 cases and contacts at present.

The city is working to temporarily hire people to help with contact tracing efforts in the short term, and would like to hire 11 more public health nurses in the next one to two months while syncing up with the state’s new contact tracing system to expand capacity, Pineda said.

Cases continue to emerge in “high-risk settings,” Pineda said, and each case that comes into monitoring has several more contacts than past cases. Earlier, people may have interacted with three to five people, while now, they’re sometimes reporting 30 to 50 contacts or more, she said.

“In the past week, we’ve had a lot of cases that are associated with locations where there’s well over 100 people that they may have interacted with and we can’t trace or contact any of them,” Pineda said.

People went dancing or socialized indoors among large groups, she said. When that happens, as people move from place to place and aren’t physically distancing or wearing masks, “that’s going to cause community spread that’s really hard to manage,” Pineda said.

In several recent instances, people with the virus visited businesses without wearing masks and didn’t stay 6 feet or more from others. There were 15 cases associated with local bars, restaurants and a strip club, Pineda said.

There were also seven cases tied to a hotel, five cases tied to employees at a tourism company and three among members of a fraternal organization, Pineda said.

The state of Alaska is in the process of implementing a contact investigation and tracking database called CommCare, which Pineda said she hoped would also help with current capacity challenges.

Putting in that new system has taken longer than expected as the state works through processes like transferring case information to the new platform, said deputy director of the Division of Public Health, Tari O’Connor.

“It just keeps being the case that we think we’re just about there and then there’s something else that needs to happen,” O’Connor said. “It’s frustrating for everybody, but some of these things can’t be rushed and we have to do it right.”

In Alaska, contact tracers coordinate around different places in the state to help where it’s needed, O’Connor said.

The state also reduced how much they’re following up with contacts, O’Connor said.

Similarly, Pineda said in Anchorage they’ve stopped reaching out to contacts every day, and are instead spreading calls out over the first, third, fifth, seventh and 14th day, she said.

The new cases can stack up, especially given the limited staffing, said Dr. Bruce Chandler, the city’s medical officer for municipal disease prevention and control. Not all cases that get reported to the health department will get handled that day, he said, and some roll into the next day.

On Tuesday, the city started giving nurses more discretion in how frequently they call contacts, and when they might instead send people information about how to get in touch with the health department. Some people want daily calls while others are “exasperated” by the calls, Chandler said.

Anchorage saw steady increases among both traveler and resident cases, Chandler said. And those are just the cases that testing helped discover.

“There are many more people out there than are currently being identified through testing,” Chandler said.

Most of the people who have the virus now are between the ages of 20 and 44, Pineda said, and when it comes to looking at possible hospitalizations in the future, it “is just a math problem.”

Young people will go to work and home to their families. They might work in health care or around the vulnerable, she said.

“And two cycles from now, their family members, their loved ones, those people with chronic diseases in our community will have the exposures occur,” Pineda said. “And I expect that we would see hospitalization go up eventually, but maybe the math is wrong.”