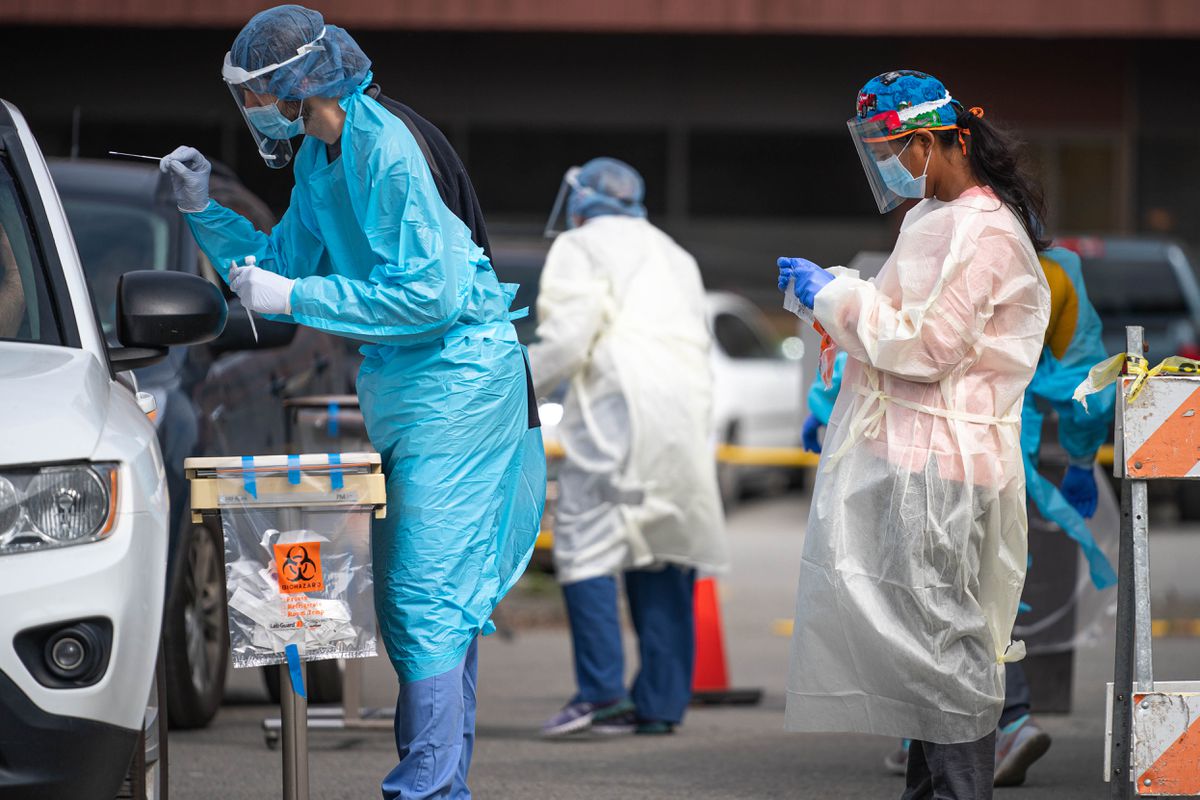 The state reported no new deaths, however. Seventeen Alaskans have died with COVID-19, the highly infectious disease caused by the virus.

As reported by the state on Saturday, five more residents also became ill enough with the virus to need hospitalization. A total of 85 Alaskans have been hospitalized since March.

Alaska’s number of cases has risen rapidly over the past month, but the state’s per capita hospitalization rate remains far lower than most other states and just 10% of those in harder-hit states like California and Texas, according to The Covid Tracking Project. Alaska’s death rate is 2.3 per 100,000, lowest of any state except Hawaii. Alaska is also testing more people than many states.

Still, officials here say spiking positive cases are overwhelming the state’s ability to conduct prompt contact tracing and could lead to more hospitalizations in the future.

Alaska’s Chief Medical Officer, Dr. Anne Zink, noted on social media that almost 30% of the state’s total cases have been reported in the past week.

The daily coronavirus death toll in the United States increased this week after months of decline, as new patients overwhelmed hospitals in hot-spot states like Texas. The U.S. reported its highest single-day infections — more than 67,000 cases — on Thursday.

Alaska on Saturday reported 63 new cases among residents — almost half of them in Anchorage — and another 14 in nonresidents, half of them in mine workers in the Delta Junction area, according to the Alaska Department of Health and Human Services COVID-19 dashboard. The total includes 24 new cases in residents of the Fairbanks area, where an outbreak among Fairbanks North Star Borough employees prompted the closure of the borough administrative building until Monday, when business will be conducted by appointment only. The borough on Saturday announced a fifth employee had tested positive.

[Alaska reports the highest rate of tuberculosis infection in the nation, at a time when public health resources are limited]

The state’s previous high was 60 cases as reported July 3 — 46 in residents and 14 in nonresidents.

It wasn’t immediately clear what accounted for Saturday’s high daily case count, whether the infected people have symptoms at time of testing, or how sick they are. About 60% to 70% of positive tests recently are in people with symptoms, officials say.

Officials in Anchorage warned Friday that many of the metrics they use to track their ability to contain the virus are currently at “yellow” or “red,” signaling concern.

Health officials here say the state’s hospitalizations may have risen more slowly than the infection rates because younger people make up the majority of Alaska’s recent cases and tend to get less ill than older patients and those with underlying medical conditions.

The new case counts reported by the state Saturday are: 29 in Anchorage and 1 in Chugiak; 1 in Seward and 1 in Soldotna; 23 in Fairbanks and 1 in North Pole; 2 in the Yukon-Koyukuk Census Area; 1 in Houston, 1 in Palmer, and 1 in a smaller Mat-Su community; 1 in Juneau; and 1 in Bethel.

The nonresident cases are: 4 in Anchorage, including two visitors; 7 in Delta Junction, all of them mine workers; 1 in Nome; and 2 in Bristol Bay and Lake and Peninsula boroughs.

There were 770 active COVID-19 infections in Alaskans reported Saturday, out of a total of 1,385 since March. Another 273 nonresidents have tested positive in total.

Recovered cases statewide now total 598 with 10 new cases recorded Friday, state officials say. A total of 143,376 tests have been conducted. The average percentage of daily positive tests for the previous three days is 1.45%.

Alaska health officials continue to urge members of the public to maintain a physical distance of at least 6 feet from people they don’t live with; wear a face covering in places where it’s difficult to maintain physical distancing; wash their hands frequently; often clean and disinfect frequently touched surfaces; stay home if they’re feeling sick; and get tested for COVID-19 if they experience symptoms of the illness.