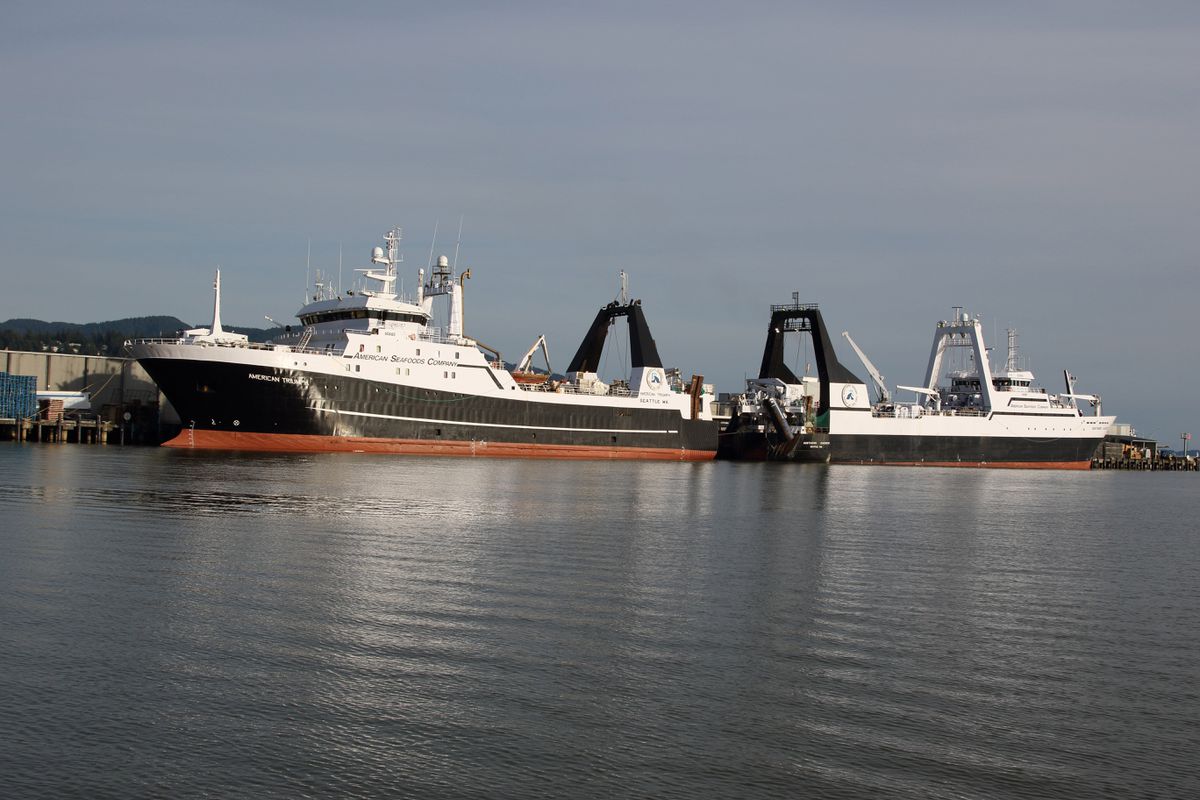 American Seafoods has reported that 85 crew members on the American Triumph, shown here moored in Bellingham, Wash., with the Northern Jaeger, have tested positive for COVID-19 in Unalaska. Both vessels are operated by Seattle-based American Seafoods. (Ron Judd/Seattle Times/TNS)

American Seafoods has reported that 85 crew members on the American Triumph, shown here moored in Bellingham, Wash., with the Northern Jaeger, have tested positive for COVID-19 in Unalaska. Both vessels are operated by Seattle-based American Seafoods. (Ron Judd/Seattle Times/TNS)

Eighty-five crew members on an American Seafoods ship docked in the Aleutians tested positive for COVID-19 over the weekend, according to the company.

The American Triumph, a factory trawler, departed Oregon on June 27 and headed to Alaska with 119 crew members to fish for pollock, the company wrote in a statement. Seven crew members reported COVID-19 symptoms two weeks after the ship departed, and they were tested in Unalaska shortly after arriving on Thursday. Six of the seven tested positive.

After testing all the remaining crew members, 79 more workers were found to be positive, bringing the total number of COVID-19 cases on the American Triumph to 85, according to a statement from the city.

Alaska saw a record number of COVID-19 cases reported Sunday, with 119 new infections statewide. Of the 85 Unalaska cases, thirty-six were reported in time to be included in the state’s daily total Sunday.

The American Triumph is a 285-foot factory trawler, part of a fleet of six fishing vessels owned by Seattle-based company. Four crew members tested positive on the vessel last month.

Lugoni said all of the crew members remained on the ship after it docked in Unalaska to prevent spreading the virus to the community.

All of the crew members will isolate in Anchorage, she said.

The 34 crew members who tested negative will take a charter flight from Unalaska to Anchorage, where they will undergo quarantine and symptom monitoring, the city said.

The infected crew members underwent additional medical screening from Iliuliuk Family and Health Services Clinic providers Sunday, according to the city of Unalaska

They will sail on the American Triumph to Seward late Sunday or early Monday with medical professionals on board, the city of Seward wrote in an email. The ship is expected to arrive on Wednesday.

“Immediately upon docking in Seward, all crew aboard the American Triumph will load directly onto waiting buses to travel directly to their Anchorage isolation location for further care and monitoring,” the city of Seward wrote.

The ship will remain in port to be disinfected, the statement said, and a new skeleton crew that has been quarantining in Anchorage will board.

The new cases are a sharp spike in the Aleutian island community of roughly 4,500 residents. There have now been 97 COVID-19 cases confirmed in Unalaska, although all but one of the cases were found in nonresidents. Unalaska operates one of the country’s busiest seafood ports.

Crews work in close quarters on fishing vessels, which makes it challenging to maintain social distance or other close contact that can easily spread the virus from person to person, according to the Centers for Disease Control and Prevention.

According to a report from the Seattle Times in June, American Seafoods has faced criticism after cases surfaced on its vessels. In early June, 94 crew members of American Seafoood’s vessel American Dynasty tested positive for COVID-19, along with four on the American Triumph and 21 on the Northern Jaeger.

The company adopted pre-boarding policies in mid-June to require crew members undergo at least 14 days of quarantine before departure. Each crew member undergoes two separate tests for COVID-19, performed on separate days, according to the American Seafoods website. Only crew members with two negative test results are allowed on board.

Lugoni said the crew of the American Triumph underwent the company’s screening protocols before the most recent departure. Somehow, the virus still managed to infect the crew.