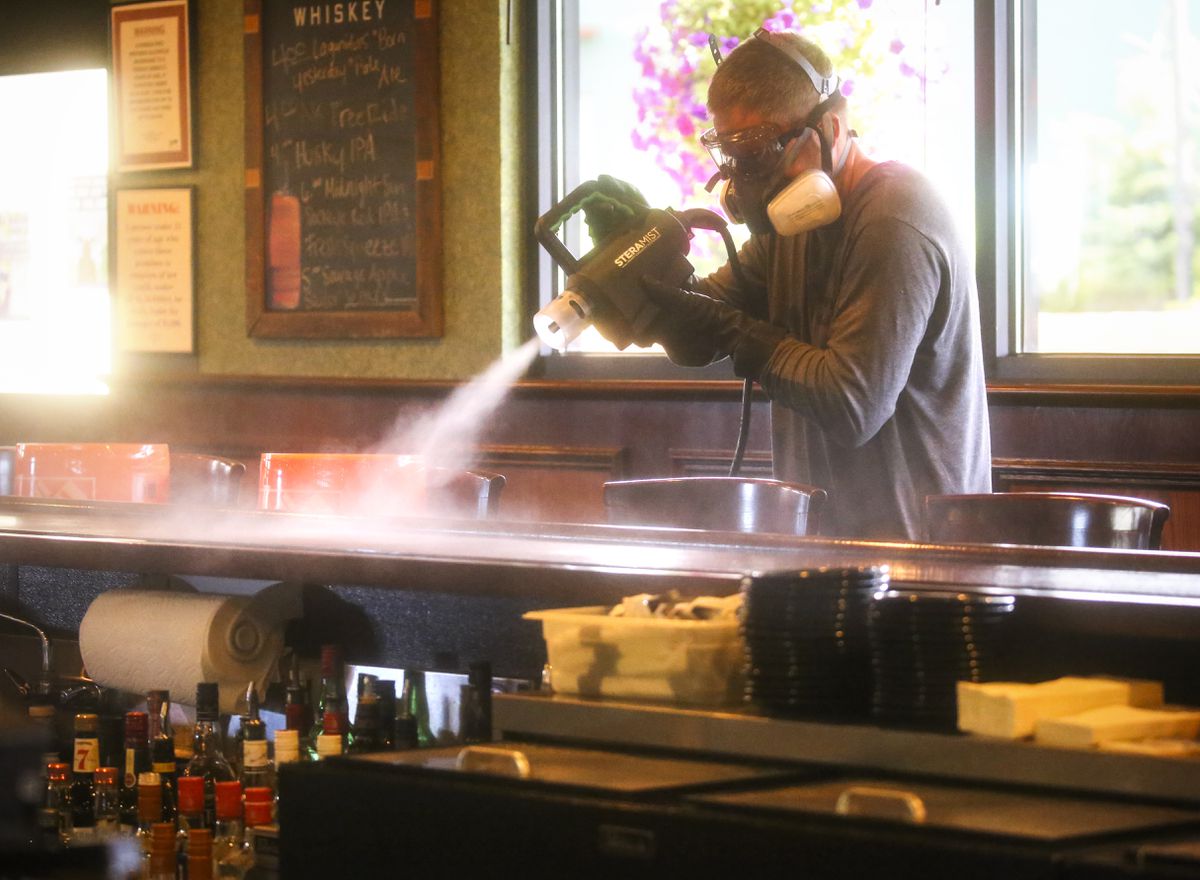 Alaska’s main service industry trade group is calling on Gov. Mike Dunleavy to impose more mandates on restaurants and bars to reduce the spread of COVID-19 — and potentially avoid another shutdown for the industry.

The mandates include requiring employees to wear masks, requiring establishments to keep a log of customers, requiring signs reminding people to stay physically distant and requiring people to use hand sanitizer when entering. CHARR is requesting that the governor implement those mandates.

“We know that a second industry shutdown would be devastating to our industry, which has already suffered in ways that were once unimaginable,” Oates said in a letter to the governor outlining the survey’s results. “We both believe in Alaska’s ability to protect the public while enabling all industries to remain open for business. Taking this immediate action would make that possible.”

After state and local officials lifted capacity restrictions on bars and restaurants, as well as other businesses, COVID-19 cases began to rise in Anchorage and statewide. In response, Anchorage has taken a more aggressive approach than the state. In addition to ordering people to wear masks in indoor public spaces, in the past few weeks, Anchorage officials published a running list of locations where people may have been exposed to COVID-19 and contact tracers were not able to properly track the exposure and notify people. Most on the list have been bars.

Oates said the survey and the request to Dunleavy and Anchorage Mayor Ethan Berkowitz represent a proactive approach.

“What we’re working on with the (Berkowitz) administration is more of a dial-back approach in the phases, rather than flipping of the switch entirely and going back into the full-blown ‘hunker down,‘” Oates said.

Oates said she had phone conversations with Dunleavy and Anchorage Community and Economic Development Director Chris Schutte on Monday.

Jeff Turner, a spokesman for the governor, said in a statement that “Governor Dunleavy is engaged in productive discussions with representatives from Alaska’s hospitality industry about how to protect their customers and employees while keeping an important sector of Alaska’s economy that employs thousands of Alaskans open and viable.”

Carolyn Hall, a spokeswoman for the municipality, said, “All options are on the table as far as what future emergency orders may look like.”

The survey went out to about 1,900 bar and restaurant owners statewide, and was open for 48 hours. About 10% responded, 32% being in Anchorage. Eighty-three percent of respondents supported new mandates.

While CHARR is not advocating for limited capacity, 69% of respondents said they were in favor of such restrictions. Half supported a temporary ban on live music and dancing.

Oates said while the survey asked respondents what mandates they would support, it did not clearly state they could select multiple mandates. She said because of that, the support for individual mandates is likely higher than the results indicate.

The survey comes as several local bars have announced on social media that they are closing down, at least temporarily, because of COVID-19 exposure.

Crossroads Lounge in Anchorage closed Monday after a customer who had visited on July 11 alerted the bar that they had tested positive, said owner Jennipher Jenner.

One of the two employees that worked that day then tested positive, Jenner said. Now all employees are taking tests, including Jenner, as are many of the regular customers, she said.

Crossroads will remain closed until it can reopen safely, Jenner said. The bar made a public announcement on its Facebook page and Jenner has a list of everyone who visited the bar. She’s also called the health department and plans to make another public announcement with more details after her employees finish testing, to help alert anyone who may have been exposed.

“We’re doing everything we possibly can to keep everybody safe,” Jenner said. “Nobody wants another shutdown.”

Jenner said the bar has been following all the state and city guidelines, including making sure employees and customers are wearing masks and enforcing social distancing inside. The infected employee wore a mask for the entire shift as required, she said.

“The place is drowning in hand sanitizer,” she said.

But with seemingly healthy people from all over the area coming into the bar, it’s impossible to keep the virus out completely, she said.

“You just don’t know — the virus is walking around with two feet apparently as healthy as an ox,” Jenner said.

Jenner said the bar has lost a lot of revenue — first during the shutdown, and now as coronavirus cases are on the rise in Anchorage, people are going out less. But other establishments are faring worse, she said.

Elsie Wu works at China Lights Oriental Cuisine, a buffet-style restaurant owned by Wu’s sister. The restaurant’s revenue is down about 80%, even after opening in June for dine-in service, she said. Even though the restaurant has changed how it operates — with servers dishing the buffet food, wearing masks and social distancing — fewer customers are eating in.

Overall, revenue for service industry establishments is down as cases are rising, Oates said.

“The reported number of cases and the recommendations that are coming out from health officials to avoid going into bars and other areas is impacting the number of customers that are going into establishments,” Oates said.

Wu said that at China Lights, that’s certainly the case. If they are forced to shut down again, Wu isn’t sure the restaurant will survive.

“I’ve had numerous establishments contact me about being ‘blacklisted,‘” she said.

Oates said establishments have reported being asked by customers whether they are on the list of places to avoid. Oates said the list doesn’t tell the full story.

“Any establishment is going to have somebody who’s tested positive for COVID enter their establishment at some point, no matter what preventative measures they take,” Oates said.

“The public shouldn’t just use that list in determining whether a place is safe or not,” she said.

Wu said she feels bad for restaurants and bars on the list, because it’s a blow to already struggling businesses.

A lot of places have small indoor spaces that make it difficult to social distance, and they are doing their best to survive, she said. Some places are struggling to enforce rules like mask-wearing with customers that don’t want to comply, she said.

Anchorage sports bar and restaurant 907 Alehouse & Grill also announced via Facebook Monday that it’s shutting down for the week after a staff member tested positive.

The bar is undergoing professional cleaning from a sanitizing service and plans to reopen next Monday, said one of the restaurant’s owners, Robert Kilby. Closing for a week will allow time for its 45 employees to get tested and monitor for symptoms, he said.

Kilby said the restaurant is taking “extreme precautions” and that it has followed all of the state and city guidelines and mandates.

But Kilby said the pandemic is creating a constantly changing environment that’s difficult to operate in, and that’s exacerbated by changing guidelines and mandates, creating an uncertain future.

Any sort of stability for employees or the business has been lost, he said.

“It’s hard, dealing with not knowing what’s going on as far as mandates and as far as restrictions from week to week,” Kilby said.

It could help if clear, long-term measures were taken, like mandating capacity restrictions for the next few months, rather than businesses operating in fear of another shutdown, Kilby said.

Although nobody wants capacity restrictions, everyone wants to keep employees and customers safe and avoid a shutdown altogether, he said.

“We’re going to survive this,” Kilby said of his business. “As long as there’s not a 6-month shutdown or something like that — nobody could survive that.”

“It is challenging for all the restaurants. We’re just hanging on,” Wu said. She hopes China Lights can hang on long enough until a vaccine helps things return to normal, she said.