Seward announced 96 new COVID-19 cases at a seafood plant as a trawler with 85 infected crew arrived. They’re all headed for Anchorage. 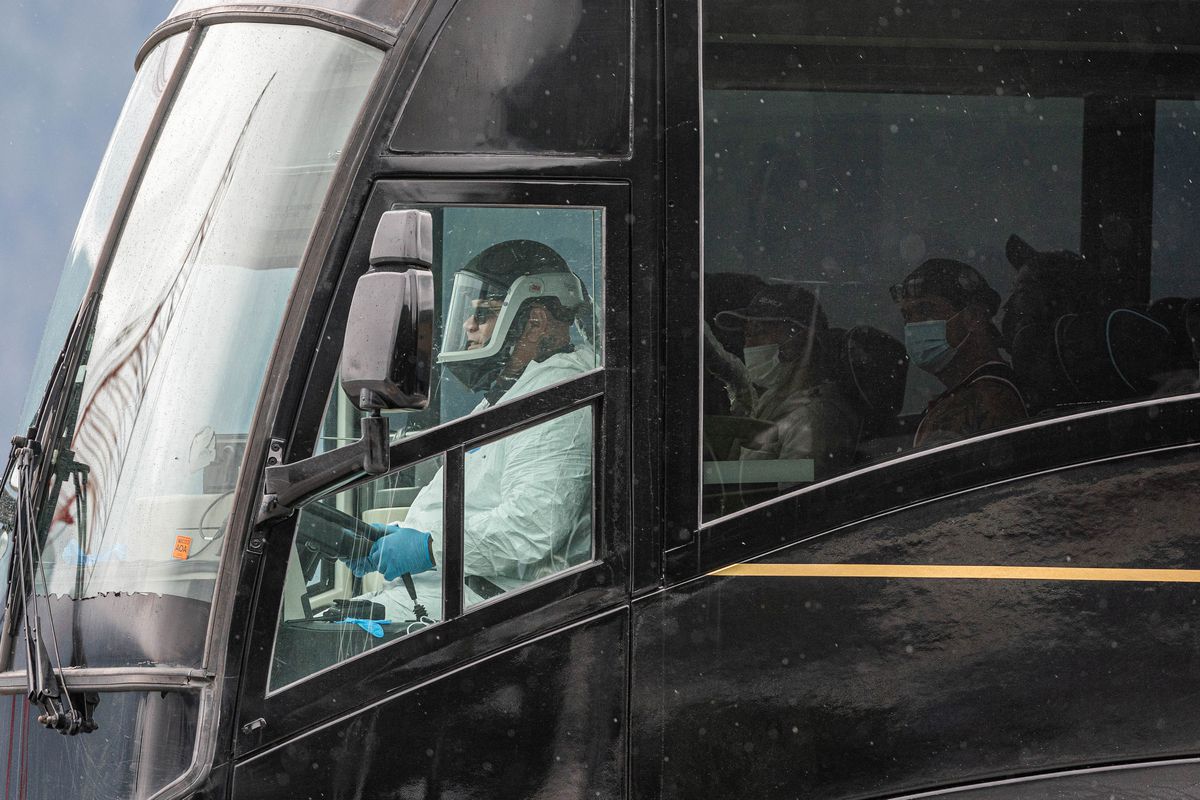 Crew members from the American Triumph are transported by bus from Seward to Anchorage on Wednesday, July 22, 2020. (Loren Holmes / ADN)

Crew members from the American Triumph are transported by bus from Seward to Anchorage on Wednesday, July 22, 2020. (Loren Holmes / ADN)

The city of Seward became the center of Alaska’s two largest coronavirus outbreaks on Wednesday, with a factory trawler and a local seafood-processing plant where a combined 181 people had tested positive.

After the 286-foot American Triumph moored at Seward’s cruise ship dock, the crew disembarked and were ushered into the waiting buses by the drivers, who were wearing ventilated PPE suits. A handful of onlookers drove by as the crew disembarked, some with binoculars. They were taken to Anchorage.

Also on Wednesday, 96 seafood workers at the OBI Seafoods processing plant in Seward — which employs 262 people — tested positive for the novel coronavirus, causing the plant to temporarily shut down, city officials said.

An employee at the plant first tested positive for COVID-19 on Sunday, after seeking medical care for an unrelated health issue, the company said. The plant immediately closed so that the company could test all its employees and disinfect the campus.

The cases included 85 nonresident and 11 resident employees, according to a presentation from Alaska’s state medical officer, Dr. Anne Zink, at a community briefing on Wednesday.

The OBI outbreak is the latest to hit the seafood industry in Alaska, occurring just days after the 85 crew members aboard the American Triumph tested positive for the virus, and more than 40 became infected at a plant operated by a Juneau fish processor.

“Alaska is currently experiencing three large, separate outbreaks of COVID-19 in the seafood industry,” said Dr. Joe McLaughlin, Alaska’s State Epidemiologist, in a written statement Wednesday evening. “These outbreaks are reminiscent of the meat packing plant outbreaks in the Lower 48 and stress the importance of vigilant symptom screening and prompt facility-wide testing in congregate work settings when index cases are identified.”

Until now, the seafood industry has remained relatively unscathed despite concerns earlier in the year about the influx of out-of-state workers and potential for outbreaks in close quarters, on vessels and in processing plants that could overwhelm the state’s fragile health care system.

In response, 11 seafood companies released a letter — addressed to communities “to confirm our commitment that we are prioritizing health and safety” of local residents — in which they detailed their COVID-19 mitigation plans.

With the exception of some smaller outbreaks in Dillingham and Whittier, the companies’ safety plans appeared to have been mostly effective.

From Seward, infected crew from the ship and the plant were headed to Anchorage for isolation or quarantine, officials said. It isn’t clear where the workers will be housed while in the city.

The sudden influx of infected people prompted municipal concerns about Anchorage hospital capacity. OBI Seafoods said in a statement that the “vast majority” of their employees who tested positive are not currently experiencing symptoms of the virus, and none have been hospitalized.

But the possibility that some could get sick enough to need medical care was a factor in Anchorage Mayor Ethan Berkowitz’s decision to issue new restrictions on bars and restaurants Wednesday.

Berkowitz at a briefing said the new restrictions stemmed in part from Anchorage’s role providing medical care for “most of the state” — including infected seafood workers, as well as residents of rural communities that rely on Anchorage hospitals.

“When we’re looking at the hundreds of cases coming in from seafood workers, that will put a burden on our ability to provide capacity for people in Anchorage,” he said. “And so we’re watching the numbers not only inside Anchorage, we’re watching what is happening outside the community.”

OBI Seafoods LLC was formed in June, the result of a merger between major processors Ocean Beauty Seafoods and Icicle Seafoods, and includes five shoreside locations in Alaska.

Earlier this summer, outbreaks were confirmed at two other OBI Seafoods plant locations in Dillingham, where 12 workers tested positive, and at the company’s Excursion Inlet salmon processing plant in Southeast Alaska, where three employees also tested positive in late June.

The company has said it has extensive safety protocols in place to prevent an outbreak like this: All employees upon arrival in Alaska are required to quarantine for 14 days, and are then tested a second time, the company said in a statement. Every OBI employee also goes through a symptom and temperature check each day, according to the company.

Annie Berman reported from Anchorage and Loren Holmes from Seward.