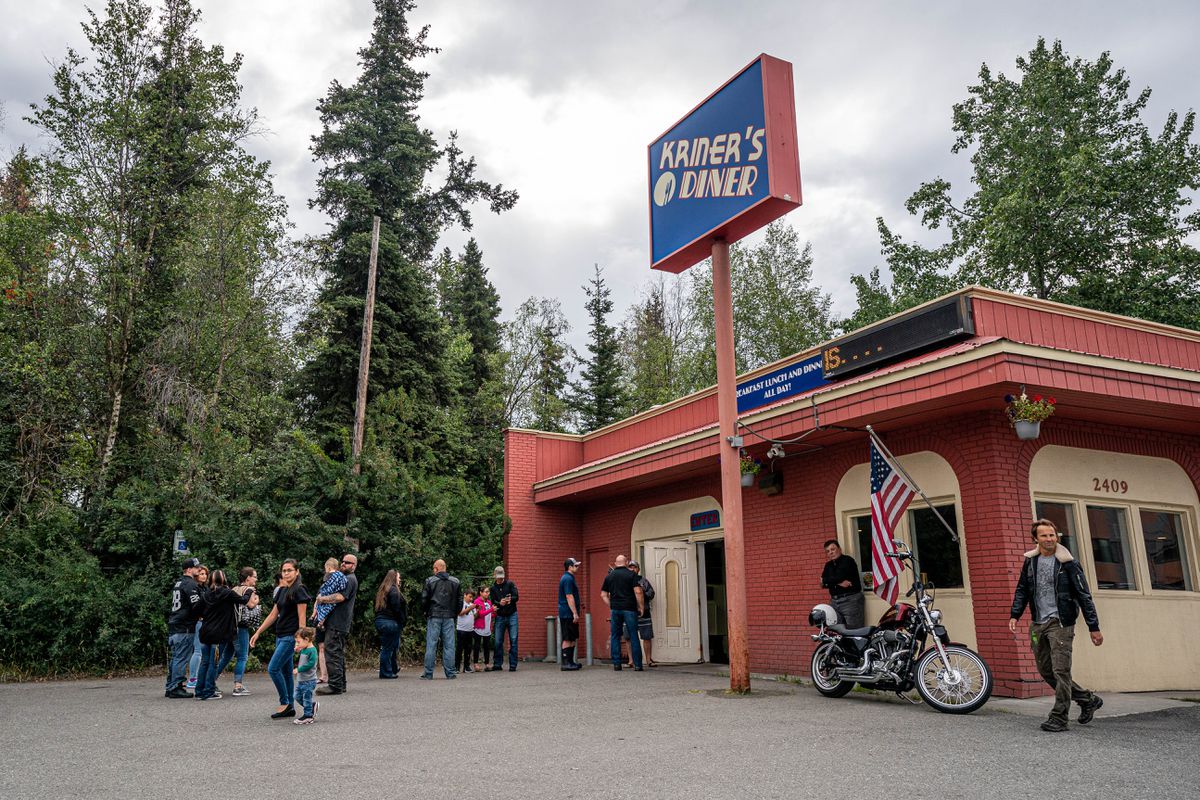 A state judge on Friday ruled that Kriner’s Diner must comply with Municipality of Anchorage’s emergency order banning indoor dining.

The Anchorage public would suffer “irreparable harm” if businesses like Kriner’s are allowed to violate the order, State Superior Court Judge Eric Aarseth wrote in his order granting the temporary injunction.

The diner, owned by Andy and Norann Kriner, had continued serving customers indoors after the mayor issued Emergency Order 15, which went into effect Monday and bans indoor dining at restaurants and breweries but allows them to continue takeout service and outdoor dining. It also closes all bars.

Andy Kriner said Friday he wasn’t planning to comply with the order, and was open on Saturday morning, with a line of customers waiting outside.

A telephonic court hearing was held Friday morning. Kriner’s Diner has become a key player amid a growing pushback against the emergency order and the city’s public health restrictions intended to curb the spread of the new coronavirus. A petition calling for the mayor to repeal the emergency order has gathered about 5,500 signatures. Other businesses have openly defied the order, as well, and the city is pursuing a similar court order against at least one other restaurant.

Aarseth heard arguments from the city’s attorneys and Kriner’s Diner Friday and granted the municipality’s motion for a temporary restraining order requiring the diner to comply with the emergency mandate.

“That the nature of the potential harm to the Anchorage public is of such significant importance, that the closure of a business would be warranted. A property interest cannot outweigh a person’s interest in life,” he wrote.

He also wrote that the diner’s economic interests and those of similar businesses are “adequately protected” because they can serve food outdoors, and offer curbside pickup, to-go and delivery.

“It went just how I thought it was going to go,” Kriner said of the hearing. “Obviously I broke the law — or what they call the law.”

Kriner could still file an answer to the complaint from the municipality, which could lead to further hearings in the matter.

“We have a great client with a great business. We have no further comment at this time,” said its administrator Katie Payton, when reached by phone Friday afternoon.

City Attorney Kate Vogel said at a community briefing Friday afternoon that the judge’s order means the diner must obey the law immediately. The ruling does not just apply to Kriner’s Diner, she said.

“His ruling, as he put it, applies and is a message for all restaurants who are wondering about their obligations. The answer is clear,” Vogel said.

During the hearing, Quackenbush argued that the emergency order violates the Alaska Constitution because it deprives the Kriners of their right to work. He also said that the city is giving the Kriners and other restaurant owners “disparate and unequal treatment.” Other employers who run similar businesses where mask-wearing cannot be feasibly observed, such as gyms, have not been similarly shut down, he said.

“If someone wants to challenge the constitutionality of a law, they are of course entitled to do so, but they’re not entitled to not comply while awaiting that judicial resolution,” Vogel said at the briefing.

Quackenbush argued during the hearing that the city has also not shown any evidence that business practices at Kriner’s Diner have contributed to the spread of COVID-19.

The city’s attorneys said that Quackenbush’s argument is not true and also misses the point — that an emergency order is the law and that Kriner’s Diner broke the law.

Vogel said Kriner’s Diner could have sought an injunction and challenged the law in a court instead of “simply not complying.”

Now, there can still be a “robust evidentiary hearing” at which their legal arguments can be tested, Vogel said. The city took the matter to court to show that it is serious and also to let the court, a “neutral decision maker,” weigh in on the legality of the emergency order, Vogel said.

The city is hopeful that the next court hearing will again affirm the mayor’s power to enact emergency orders, she said.

The city is seeking another injunction from the court that would order Little Dipper Diner to stop its indoor service, which that diner also continued this week.

When asked about the court decision, Berkowitz said in a briefing on Friday, it was a “heavy day,” and that he took no joy in the decision because Alaskans should be able to solve problems without resorting to litigation.

“I think the importance of being able to protect public health through these public health orders is so important that the law has to apply to everybody,” he said. “And if we want it to be as effective as possible, everyone needs to comply with it.”

Pushback on the city’s pandemic policies is growing. Anchorage health experts say the pandemic’s risks are growing, too.

Berkowitz said he wants to bring the number of COVID-19 cases down with a collective effort, in order to let up on some of the restrictions.

The mayor said he was “gratified” by the large majority of businesses complying with the order.

“I know it’s easy to follow the outliers, and that’s what’s happened,” he said. “And they have received a disproportionate amount of publicity for what they’re doing.”

The mayor said indoor dining is considered “high-risk behavior,” according to the federal Centers for Disease Control and Prevention, and said that if the city and country had better contact tracing, they would be better able to precisely close certain businesses. Instead, they’re making “broad-brush decisions,” based on what’s known to be high-risk, until they know more.

More broadly, the mayor said the nation’s response to the pandemic has in some ways “become a Rorschach test of partisan politics.”

“Those who are politicizing the response to a pandemic are really jeopardizing public health,” Berkowitz said. “And they’re also putting our economic well-being at great risk, and they ought to be held accountable for it. There is no partisan advantage in getting people sick and in perpetuating the pandemic.”

Berkowitz said the U.S. is supposed to be a leader, “and we’re behaving almost like a failed state here. And that is the result of people injecting politics into what should be rational decisions. So am I surprised? I’m incredibly disappointed,” he said in response to a question about the pushback on the order.

The mayor said he thinks that after November’s election cycle, the “hypertension” of the moment will begin to ease.

“We need to remember that we’re dealing with the stress of the economy, the pressure of a pandemic, but also just the hyper-partisanship that the entire country is in right now,” he said.

Still, the emergency order caught some businesses by surprise. Hospitality industry leaders have said that it unfairly targets their industry and that many restaurants and bars are vulnerable and struggling.

Business owners interviewed by the Daily News have said that state aid has been slow to arrive while federal pandemic aid has dwindled. It is uncertain when more will be available as another aid package is tied up in Congress.

Sarah Oates, Alaska Cabaret, Hotel, Restaurant and Retailers Association president, said that the municipality should be prepared to see a “significant number of permanent closures” of local bars and restaurants.

Anchorage Health Department Director Natasha Pineda said the city considers dining in a non-critical activity where people are “clumped together,” whereas other businesses like gyms have other restrictions that keep people separate.

Pineda cautioned that coronavirus case numbers have increased rapidly in recent weeks, at one point overtaxing the resources of public health workers attempting to do contact tracing.

The daily cases this week were fewer — with 443 new cases reported since Friday compared with 494 in the week prior — and contact tracers are catching up, said Pineda. While daily cases saw decreases, the city’s weekly case rates are still concerning, she said. And the cases numbers overall are still really high. Hospital capacity, in terms of ICU beds and ventilators, is still at risk, she said.

“Each one of us has an ability and a responsibility to do our part to prevent this virus from spreading, so we can keep our businesses open as much as possible, so we can keep our hospital capacity at the level where it’s supposed to be,” Berkowitz said.

Berkowitz said that almost everyone in Anchorage had started to wear masks and “almost all businesses are complying,” with the city’s new order.

“It has been a real demonstration of grit,” he said.

The city is currently deciding how to disperse money from the CARES Act and is looking at a proposal that relates to the hospitality and tourism industry, Berkowitz said. The Assembly will discuss it Tuesday, he said.

“I’m going to ask today, make sure that those funds can be released soon so we can continue our work with the industry groups to make sure that we get that money out as quickly as possible,” Berkowitz said. “We know people in the hospitality industry in particular are paying the price for protecting the rest of us.”

The city has said that restaurants, breweries and bars that do not comply with emergency orders will be disqualified from receiving aid from the municipality.

Berkowitz said that even amid the pressure and disagreements, “there is a need for decency here right now, there’s a need for strength.”