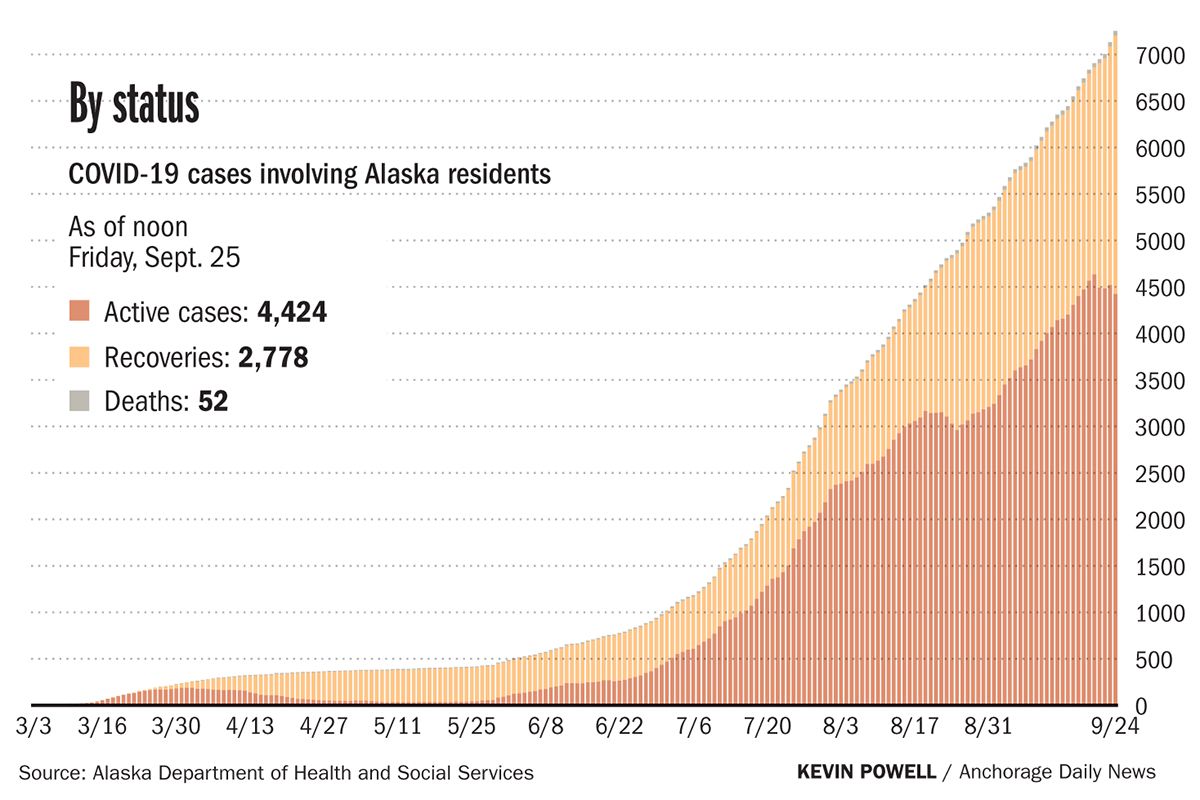 The state on Friday reported six new deaths and 128 new cases of COVID-19, according to the Department of Health and Social Services COVID-19 dashboard.

The newly reported deaths included a man in his 60s from Anchorage who died recently, according to a statement sent out by DHSS on Friday.

According to DHSS, the five other deaths were identified as COVID-19 deaths by the federal Centers for Disease Control and Prevention’s National Center for Health Statistics, which reviews and codes all death certificates across the country and may identify COVID-19 deaths that were not immediately reported to the state.

In total, 52 Alaskans have died with COVID-19 since the pandemic began here in March.

While Alaska’s death rate remains among the lowest in the country, Friday saw the highest number of deaths reported by the state in a single day. The previous high occurred on Aug. 25, when the state reported the deaths of four Anchorage residents.

Statewide as of Friday, 39 people were hospitalized with COVID-19 while four other hospital patients were awaiting test results, according to state data. Of Alaska’s 153 intensive care unit beds, 85 were in use statewide. Fourteen people with confirmed or suspected COVID-19 infections were on ventilators as of Friday afternoon.

Active cases of COVID-19 among Alaska residents fell from 4,519 on Thursday to 4,424 on Friday. According to state data, there are also 684 active cases among nonresidents.

Of the 127 new cases of COVID-19 involving residents, there were 68 new cases in Anchorage; 22 in Fairbanks; nine in North Pole; six in Juneau; three in Chugiak; three in Utqiagvik; two in Eagle River; two in Kotzebue; one in Soldotna; one in Delta Junction; one in Palmer; one in Wasilla; and one in Bethel.

Among communities smaller than 1,000 not identified to protect confidentiality, there was one new case in the Yukon-Koyukuk Census Area; three in the Nome Census Area; two in the Bethel Census Area; and one in Bristol Bay.

The only new nonresident case was in Anchorage.

The state’s testing positivity rate as of Friday was 2.31% over a seven-day rolling average.

Editor’s note: This story has been updated to reflect changes to state data that resolved discrepancies in the number of Alaskans who have died with COVID-19.