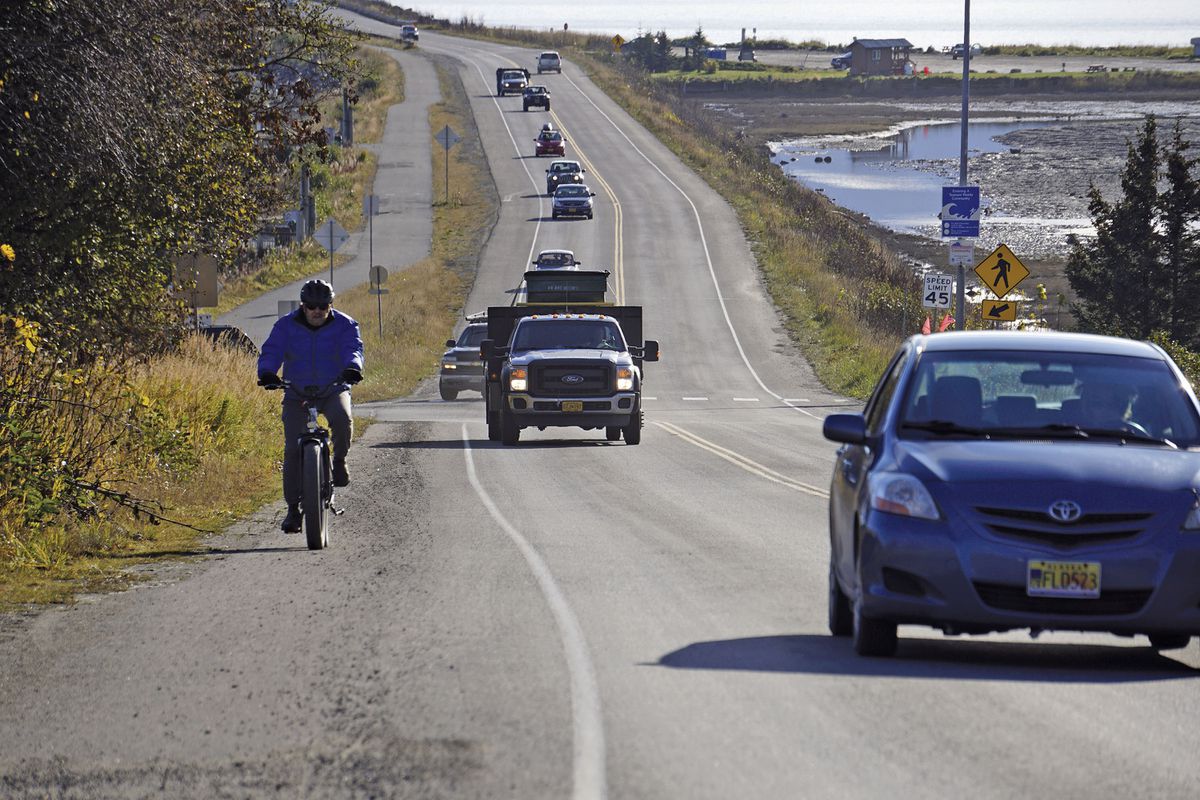 A biker leads a line of cars driving off the Homer Spit at about on Monday, Oct. 19, 2020, in Homer, Alaska after a tsunami evacuation order was issued for low-lying areas in Homer. (Michael Armstrong/Homer News via AP)

A biker leads a line of cars driving off the Homer Spit at about on Monday, Oct. 19, 2020, in Homer, Alaska after a tsunami evacuation order was issued for low-lying areas in Homer. (Michael Armstrong/Homer News via AP)

Update, noon Tuesday: The U.S. Geological Survey on Tuesday upgraded the magnitude of Monday’s earthquake from 7.5 to 7.6.

A magnitude 7.5 earthquake hit off the Alaska Peninsula coast Monday afternoon and triggered a tsunami warning for communities along hundreds of miles of coastline. The warning was cancelled after about three hours, but communities had evacuated to higher ground during the chaos.

The quake’s epicenter was in the North Pacific Ocean about 55 miles southeast of Sand Point at 12:54 p.m. and had a depth of 25 miles, according to the U.S. Geological Survey. The area is about 575 miles southwest of Anchorage.

Monday’s earthquake was an aftershock of the magnitude 7.8 quake that struck the same area in July, said State Seismologist Michael West. The earthquake triggered more than two dozen of its own aftershocks shortly after, ranging from 3.5 to 5.9 magnitude. West said additional aftershocks will continue in the area for days after.

The earthquake was felt most strongly in coastal communities, but could be felt as far away as Chugiak, Anchorage and Bethel. West said the quake was described by many as long-lasting.

“It was a pretty good ride — I couldn’t tell you for how long — maybe 15-30 seconds,” said Michael Ashley of Cold Bay. “All the couches, recliners and bookcases were moving around, and I had to pretty much hold one of them up.”

No injuries were immediately reported.

In Sand Point, Patrick Mayer, superintendent of Aleutians East Borough School District, was visiting Sand Point School when the earthquake hit. He described it as lasting about 30-45 seconds.

“You kind of always wait for it to build more, but it just lasted and trailed off,” he said.

The earthquake initially triggered a tsunami warning along roughly 500 miles of the Alaska Peninsula coastline, according to the U.S. Tsunami Warning Center. The warning extended from Kennedy Entrance, 40 miles southwest of Homer, to Unimak Pass, 80 miles northeast of Unalaska.

Communities within the warning zone evacuated to higher ground for safety as the tsunami was expected to approach. Tsunami waves were expected to begin in Sand Point, the closest community to the quake, about an hour after the earthquake shook the town.

The Sand Point School is a designated tsunami evacuation point for the town, and its school bus evacuated workers from the Trident Seafoods processing plant. About the time the tsunami was expected to arrive, Mayer said there was no wave in sight.

The tsunami waves reached a height of 2.2 feet above the tide in Sand Point, which Scott Langley of the National Tsunami Warning Center said would have looked similar to a “quick incoming tide.”

“It’s not like your Hollywood style, giant wave coming in,” he said.

Sand Point saw the strongest waves, while communities further away were less impacted. In Dutch Harbor, the wave height measured only a fifth of a foot. Marjie Veeder, city clerk and public information officer for Unalaska, said there were “blue skies, sunshine and a flat, calm bay” Monday afternoon.

There were no immediate reports of damage throughout several coastal communities Monday afternoon.

“It doesn’t appear that we’ve had injuries,” said Sand Point Chief of Police Dave Anderson after the all-clear was given.

He and city harbormaster Douglas Holmberg observed a significant tidal surge in the city’s harbor, and officials are still checking for damage, he said.

King Cove city administrator Gary Hennigh said from Anchorage that the quake was felt in the Alaska Peninsula community but everything seemed to be intact.

The tsunami warning was cancelled around 3 p.m. Monday, when officials determined the waves would not cause any significant threat to the area. A tsunami advisory remained in place that afternoon.

“Tsunami advisories mean that a tsunami capable of producing strong currents or waves dangerous to persons in or very near the water is expected or is already occurring. Areas in the advisory should not expect widespread inundation,” the center wrote.

The National Tsunami Warning Center advised coastal cities to keep a vigilant watch for changing sea levels and said the advisory would be over “when hazardous waves have not been observed for at least two hours.”