Mother of all jökulhlaups reported by commercial fisherman in Southeast Alaska 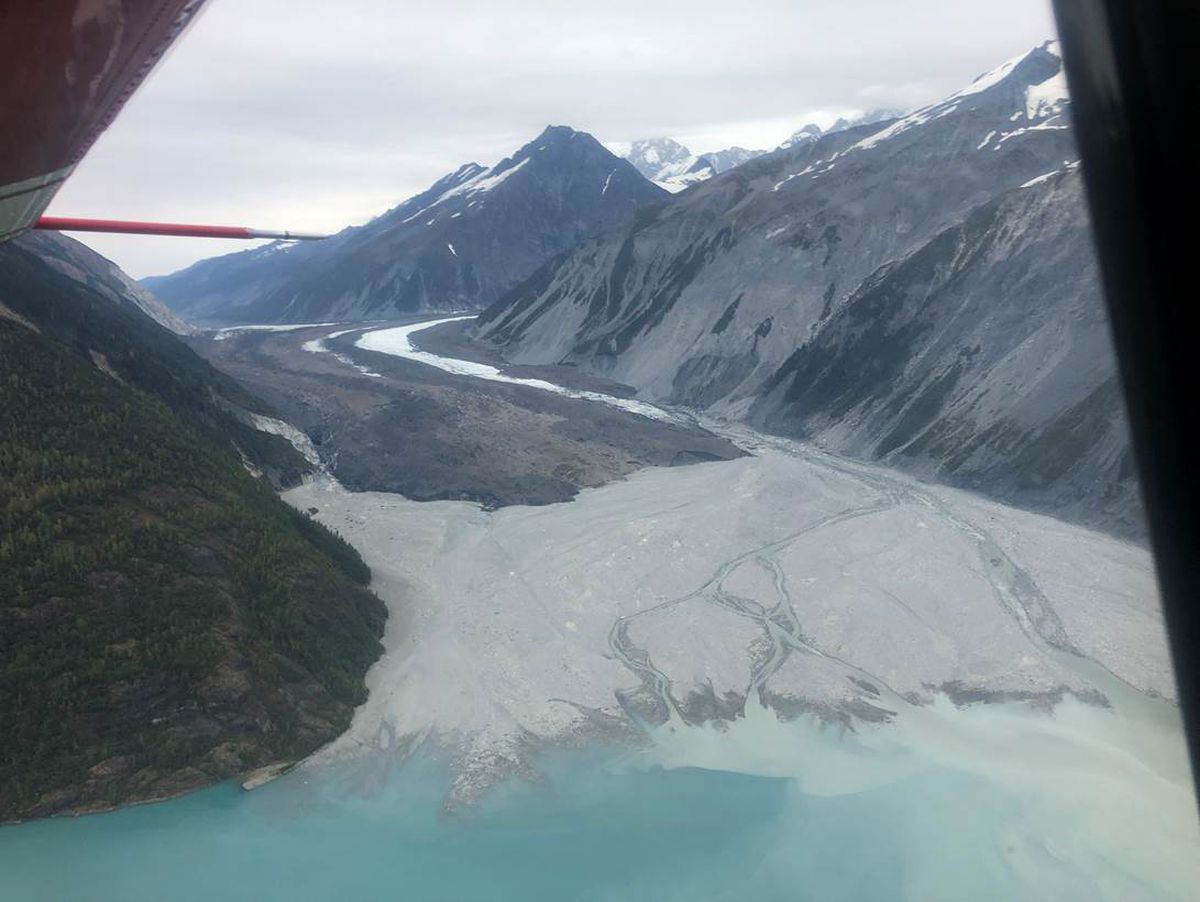 The terminus of Lituya Glacier on September 17, 2020, after the delta (foreground gravels) was completely resurfaced by the Aug. 15 outburst flood. The source of the flood, “Desolation Lake,” is just visible under the aircraft’s red pitot tube, while the main body of Lituya Glacier emerges from the mountains to the right. (Photo courtesy of J. Capra/NPS)

The terminus of Lituya Glacier on September 17, 2020, after the delta (foreground gravels) was completely resurfaced by the Aug. 15 outburst flood. The source of the flood, “Desolation Lake,” is just visible under the aircraft’s red pitot tube, while the main body of Lituya Glacier emerges from the mountains to the right. (Photo courtesy of J. Capra/NPS)

This article originally appeared at KTOO.org and is republished here with permission.

But they probably would not have known about it if they had not been tipped off by an observant commercial fisherman.

Jim Moore says Lituya Bay on the outer coast of Southeast Alaska has always been a special place for his family. During the first day of the August chinook season, the Sitka commercial fisherman was out in his boat with his two grandsons preparing to ride the flood tide into the bay to anchor up for the night.

Instead, the current was flowing out, the other way.

The water was muddy, full of trees and other debris. And, something that Moore hasn’t seen since the 1970s — icebergs, as far he could see into the bay. They were mostly refrigerator-sized and smaller.

“We picked up a couple and put this ice, this thousands of years old ice into our cooler to keep our food on the trip,” recalls Moore.

Moore says it was too dangerous to fight the current to get into the bay.

“The prudent thing to do was just leave the area,” Moore says.

Lituya Bay is a place where Mother Nature has always had the upper hand.

In 1786, for example, French explorer Jean-François de Galaup La Pérouse lost two boats and 21 men trying to chart the entrance to the bay.

Longtime Southeast Alaska residents may remember the 1958 earthquake that killed five people. It triggered a rockfall in the bay that generated one of the world’s tallest tsunamis, at least 1,700 feet tall.

But what caused this latest mystery?

Michael Loso, a geologist with the National Park Service, says satellite images taken just before and after the August event were key to solving it. First, he looked at the braided river delta between Lituya Glacier and Lituya Bay.

“The active channels that normally carry meltwater from the glacier down to the ocean had been completely revamped. Preexisting channels were gone and new channels have formed in other places.”

Loso says they suspected Moore saw the aftermath of a glacial dam release. It’s got a cool Icelandic name, jökulhlaup.

Here’s how it happened: Just above Lituya Glacier is Desolation Valley. In it, a 4-square-mile lake is collecting meltwater from other nearby Desolation and Fairweather glaciers.

Lituya Glacier normally acts as a dam, holding the lake’s water in place.

Loso says a colleague noticed Desolation Lake’s water levels had dropped by as much as 200 feet.

“What that meant is now we essentially had sort of the smoking gun of where did that water come from,” Loso says.

It likely found a path under Lituya Glacier. And, it’s a lot of water.

“Roughly the average hourly discharge of the Amazon River, the biggest river in the world,” Loso says.

The amount of water is roughly 20 times the volume released by Mendenhall Glacier from Suicide Basin near Juneau in a similar event every summer.

Loso says anyone camping on the delta would’ve witnessed a big violent torrent of water pouring down on them over a day or so.

“You would’ve had a little bit of time if you were paying attention to get out of the way,” Loso says. “But if you didn’t pick up on the signs of the rising river levels as the flood sort of began, that would be a deadly place to be.”

He also believes water levels throughout Lituya Bay would’ve risen several feet above the high tide line because of the jökulhlaup.

“It would be interesting going back this coming year and seeing if there was any noticeable changes in that because that’s a lot of water that ran out carrying a big load of silt or mud or something,” Moore says.

Loso hopes Moore’s data will help them discover areas prone to underwater landslides, mini tsunamis, or any other secrets in Lituya Bay.