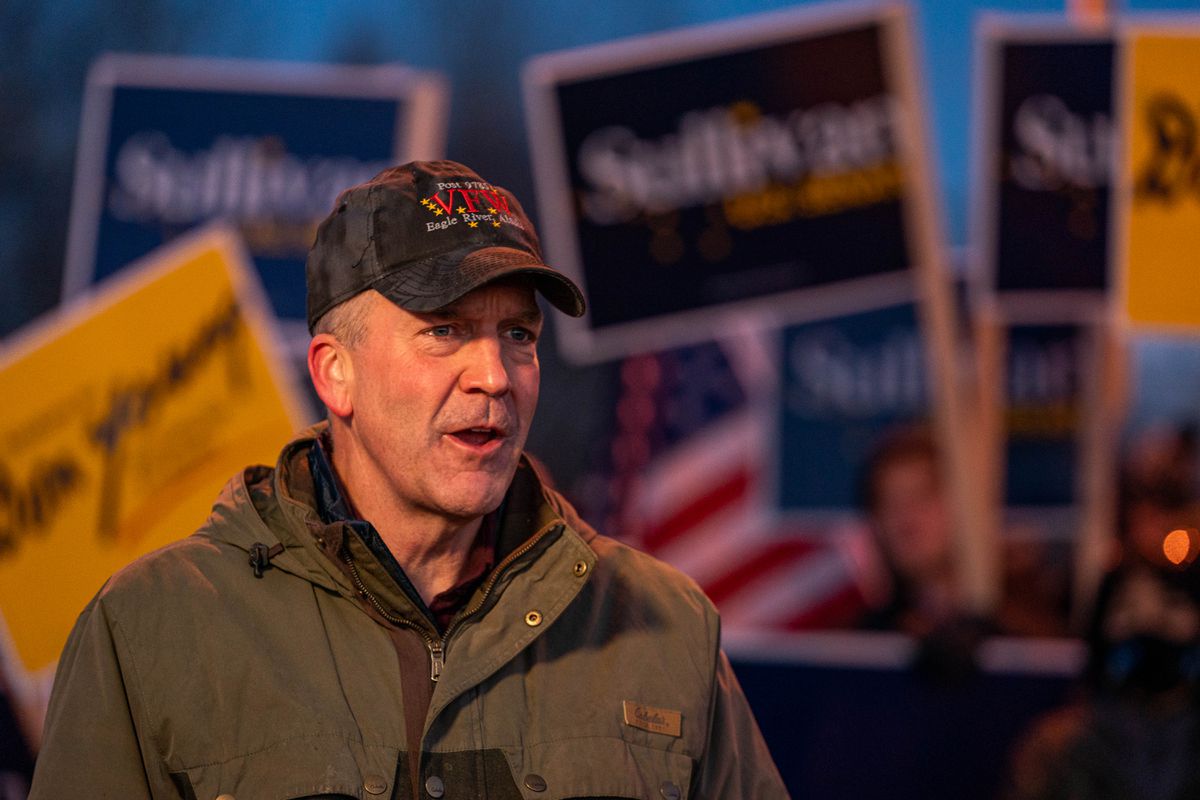 Many votes have not yet been counted, but early results showed Sullivan and fellow incumbent U.S. Rep. Don Young, R-Alaska, with solid leads over their challengers, both independents with the Democratic nomination.

“The people have spoken, they have spoken loudly,” Sullivan said, taking the stage at the 49th State Brewing Co. ballroom in Anchorage at about 11:15 p.m.

Despite the lopsided early results and the fact that more than 120,000 ballots won’t be counted for at least another week, both Sullivan and Gross stood in front of their supporters Tuesday night to say every vote should be counted.

Both men said that once the count is final, they’ll be victorious.

“Here’s why we are going to win this race: We have a vision for Alaska,” Sullivan said.

Sullivan advocated for a complete counting of the ballots, and pledged to still win big in the end.

When Gross stood before his supporters Tuesday night, he had a similar message.

“In the coming days, you will continue to see me talking about counting votes, because tonight is just the beginning of that process. I hope my opponent will do the same," he said. "And when every vote has been counted, we will win.”

As the second round of results came in, Sullivan sat in a room a floor below the ballroom, drinking a beer while giving an interview.

“All the money in the world can’t buy an election,” Sullivan said. “My opponent outraised me, outspent me. Mostly from Lower 48 liberals. But what they never put forward was an agenda, was a vision.”

There are many votes left to count, but the early lead gave Sullivan and Young a big cushion.

“We’ll see how the night progresses, but I am feeling confident because of the campaign we ran,” Sullivan said.

“We know that a lot of our supporters have voted by absentee,” he said. “Probably disproportionally to Sullivan’s supporters, so we do expect to increase our margin once the absentee ballots are counted.”

At about 10:30 p.m., Gross spoke on a riser in his South Anchorage backyard with his family at his side, his breath visible in the 9-degree air.

“While we don’t have the complete results tonight, we do know this. Victory is definitely within our reach,” he said. “It is within reach because of the literally tens of thousands of Alaskans who’ve mailed in their ballot so their voices can be heard, and those votes must be counted.”

“Congressman Young’s hard work and effectiveness on behalf of Alaska is recognized and looks like it has paid off again,” campaign manager Truman Reed said. “We’re optimistic and want to thank our friends and supporters around the state.”

Galvin was participating in a Facebook Live watch party as the early results came in.

“It is important to make sure that each vote is counted, so while we await the results in the coming weeks, I would like to thank Alaskans across the state for their incredible support," Galvin said in a statement.

"I look forward to seeing the final results in the coming weeks,” she said.

By 6:30 a.m. Tuesday, 161,217 Alaskans had already voted absentee or early, according to the Alaska Division of Elections. Of those votes, 37,995 will be included in the Election Day total.

Additionally, more than 40,500 absentee ballots have been sent but not yet returned to the Division of Elections, according to Tuesday morning statistics. In Sullivan’s 2014 win, 282,400 votes total were cast.

Regardless of outcome, Alaska’s Senate race exceeded expectations. Months ago, Gross was a little-known doctor who had advocated for national health care reform. But over the summer, fueled by nearly $17 million in donations, he became a household name in Alaska.

His team campaigned aggressively, serving Alaskans with an onslaught of TV, digital and paper ads, many attacking Sullivan as a party-line Republican who is in the pocket of industry.

Sullivan likewise attacked Gross as too liberal for Alaska, pointing out his high volume of out-of-state donations from Lower 48 Democrats hoping Gross could flip the Senate blue.