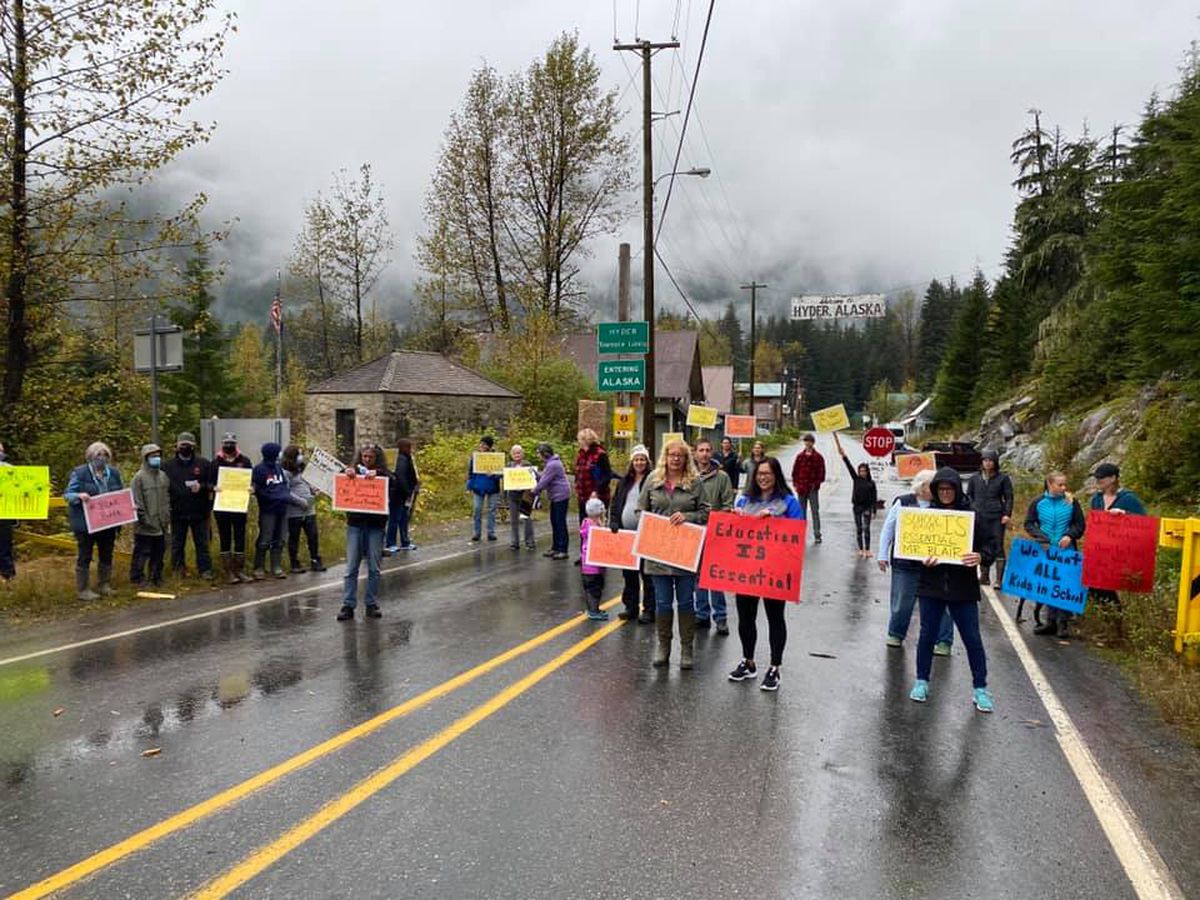 Residents of Hyder, Alaska, rally at the Alaska-Canada border on Sept. 19, 2020. Residents of Hyder and neighboring Stewart, British Columbia, are pushing for eased border-crossing restrictions amid the COVID-19 pandemic. (Photo by Jennifer Bunn)

Residents of Hyder, Alaska, rally at the Alaska-Canada border on Sept. 19, 2020. Residents of Hyder and neighboring Stewart, British Columbia, are pushing for eased border-crossing restrictions amid the COVID-19 pandemic. (Photo by Jennifer Bunn)

Travel restrictions instituted during the coronavirus pandemic were eased last week for two isolated, interdependent towns sitting on opposite sides of the Alaska-Canada border.

But residents of Hyder, in Southeast Alaska, and Stewart, British Columbia, say the new regulations have caused confusion about what qualifies as a valid reason to go back and forth, which has led to some being turned back at the border.

“Basically it does not describe what the necessities of life are, so it’s up to our local port of entry to determine what those things are,” Stewart resident Jane Beaumont said.

Residents of Hyder, population 78, rely on Stewart, with about 400 residents, for necessities like groceries, gas and even doctor visits and say the restrictions disrupted their way of life.

“For all of us, it very much is one community, rather than two communities being divided,” Beaumont said.

[Hyder, Alaska: Life and love on the international border]

The towns are roughly 3 miles apart. Before the pandemic, people routinely crossed the border several times per day, but in March the crossings were restricted. One person from each Hyder family was allowed across the border for a short time each week to purchase supplies.

On Friday, the Canadian government announced that border restrictions would be eased “only to access the necessities of life (e.g., food, medical services) from the nearest Canadian or American community.”

“The limited and practical changes will continue to protect Canadians' health and safety while removing hardships for children and for residents in remote communities impacted by the border restrictions," said Bill Blair, Canada’s minister of public safety and emergency preparedness, in an online statement.

Beaumont said the decision was a step in the right direction but she would like to see the restrictions loosened further so the towns can instead be one “bubble.” Neither Hyder nor Stewart has had a confirmed case of COVID-19, although Hyder does not have a medical clinic and therefore has had no testing capability.

Both towns are geographically isolated — the largest nearby Alaska city is Ketchikan, reachable only by a 75-mile flight. A road out of Stewart connects to the British Columbia highway system.

Beaumont and her sister created a committee that has pushed for border restrictions to be lifted. At the start of the pandemic, both towns accepted the restrictions as a temporary setback, but Beaumont said she now worries about how the long isolation will impact residents, especially as winter sets in.

“It’s the support networks of family and friends on both sides of the border which are so important,” she said.

Beaumont grew up in Hyder but now lives in Stewart. She said most people in each town have friends and family on the other side of the border. Beaumont and her sister, Jennifer Bunn, have dual citizenship.

Before the pandemic, Beaumont crossed the border daily to help take care of things in her 70-year-old mother’s Hyder home. In past years, Beaumont said, her mother has needed increasing help with housekeeping and winter preparation because of her arthritis.

“There was a number of things we needed to attend to at my mother’s place,” she said. “You’re terrified because winter is approaching and these things aren’t done.”

Bunn had helped their mother since the closure, but in September she and her two sons moved across the border to Stewart so the boys could return to school. The school in Hyder was closed last year due to low enrollment, and the handful of students in the town enrolled in Stewart’s school.

Bunn said she felt heartbroken about the move.

“Hyder is home for me,” she said. “But the sense of relief when I crossed that border — I don’t even think I realized the impact of being trapped there even had on me. I kept focusing on my kids and how it was impacting them, but it was a weight lifted. And that makes me sad. It doesn’t have to be like that.”

Friday’s statement by the Canadian government said students would be allowed to cross the border for classes, “conditional upon support from provincial and local public health authorities.” But Bunn said the three students remaining in Hyder have still been unable to cross.

The border restrictions have also affected people in Stewart who rely on forests in Alaska for subsistence lifestyles. Beaumont said residents have been unable to hunt or gather berries as they normally would, which has caused food insecurity that could increase as winter sets in. The food bank in Stewart has seen a drastic increase in need, Beaumont said.

“We just want clarity for our community regarding what we can do and what we can’t do,” Beaumont said. “And then it’s equal for all, instead of well, this happened to one person but someone else had a different experience.”