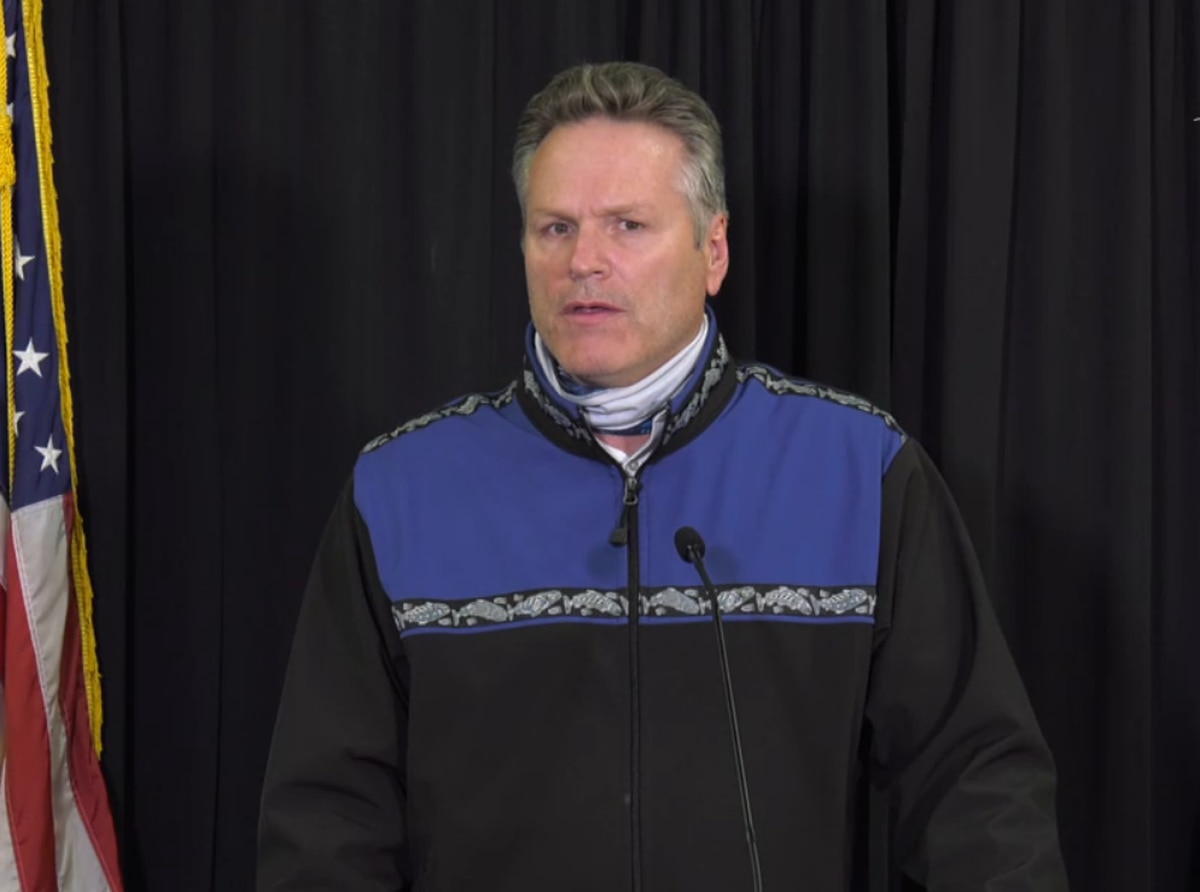 Gov. Mike Dunleavy on Friday evening implored Alaskans to step up protective measures to prevent the spread of the coronavirus as he announced a statewide COVID-19 emergency declaration that will take effect later this month.

The current emergency declaration is set to expire Nov. 15. Dunleavy described the new 30-day declaration, which goes into effect at 12:01 Nov. 16, as a “very tight, very controlled” declaration of emergency that would still allow for a nimble response to the pandemic.

“I believe it’s in the best interest of Alaska to declare a new emergency for 30 days — not a year, not two years — a limited amount of time to give us an opportunity to every day take a look at where this virus is going and what we need,” Dunleavy said in a community briefing.

His announcement drew a mixed reaction from state lawmakers, some of whom questioned the legality of the new declaration while others said it was the best option, given the circumstances.

Still, Dunleavy said a declaration of emergency would not “put an end to this virus.”

In Friday’s briefing, Dunleavy urgently pleaded with Alaskans to wear masks and asked businesses to have people socially distance as much as possible, though he stopped short of issuing any new mandates to that effect.

“I’m asking you, I’m imploring you, that we all need to be a little better — including myself — when it comes to wearing a mask, when it comes to doing business via distance, when it comes to limiting interaction with others,” Dunleavy said. “Because right now, this is the tool that we have before these specific vaccinations come into mass production.”

If daily case counts continue to increase, the governor said, Alaska could enter into dangerous territory in terms of its health care capacity — something health officials have reiterated for weeks as case counts climbed.

“The mathematics will eventually work against us,” Dunleavy said.

Alaska has witnessed daily COVID-19 case counts reaching new highs in the last few weeks. On Saturday, the state recorded its highest daily tally yet, with 604 new cases of the illness.

While the state has beds and facilities to care for a potential excess of patients, finding health care staff to care for those patients is proving more difficult, Dunleavy said — especially as health care workers are at risk of getting sick themselves.

The governor’s briefing came on the same day that the Municipality of Anchorage tightened up its emergency orders, further limiting gathering sizes and tweaking the mask order in the state’s largest city.

Like elsewhere, Alaskans are divided on what the government should do about coronavirus, and Dunleavy has been criticized for not imposing tougher restrictions — such as a statewide mask mandate — but also for being too aggressive. As he spoke on a Facebook live feed, there were comments supporting him but others expressing skepticism about the severity of the pandemic and the need for extra precautions. “FEAR MONGERING,” said one.

Among other things, the existing disaster declaration gives hospitals the authority to practice telemedicine, do off-site testing, expedite licensing for essential personnel and operate alternate care centers for COVID-19 patients.

“Let me be clear: Today, at this rate, Alaska’s hospitals are headed for a crisis,” association president and CEO Jared Kosin said. “If there is no emergency declaration in place after Nov. 15, our ability to provide health care will be utterly compromised.”

For months, the governor has declined to issue a statewide mask mandate. Dunleavy re-affirmed that position on Friday evening, noting that local communities should encourage mask-wearing and that he’d support local mask ordinances.

Still, he pleaded with Alaskans to take the pandemic seriously and step up their vigilance surrounding the coronavirus.

“We can find nothing in state law that says he can declare (the) same disaster twice,” said Sen. Lora Reinbold, R-Eagle River, on social media.

House Speaker Bryce Edgmon, I-Dillingham, said the governor’s decision is “fraught with risks” and raises the question of what happens if someone legally challenges it.

He and other lawmakers said before the governor’s decision that a 30-day order just means delaying the problem into December, not solving it permanently.

But Sen. Bert Stedman, R-Sitka, said he thinks there are risks involved with flying lawmakers and staffers to Juneau during the pandemic.

“The governor’s been doing a good job, and I think he’s making a correct move,” Stedman said.

House Minority Leader Lance Pruitt, R-Anchorage, said the governor is “kind of in a weird box on this whole thing.”

“Either he gets people mad at him because he’s ‘going around the Legislature,’ or he works with the Legislature and they turn around and stab him in the back,” Pruitt said.

There’s also a third side: Alaskans who want the emergency declaration to expire altogether.

“He’s got that problem, too,” Pruitt said. “There’s definitely plenty of people who would be mad at him for extending the emergency.”