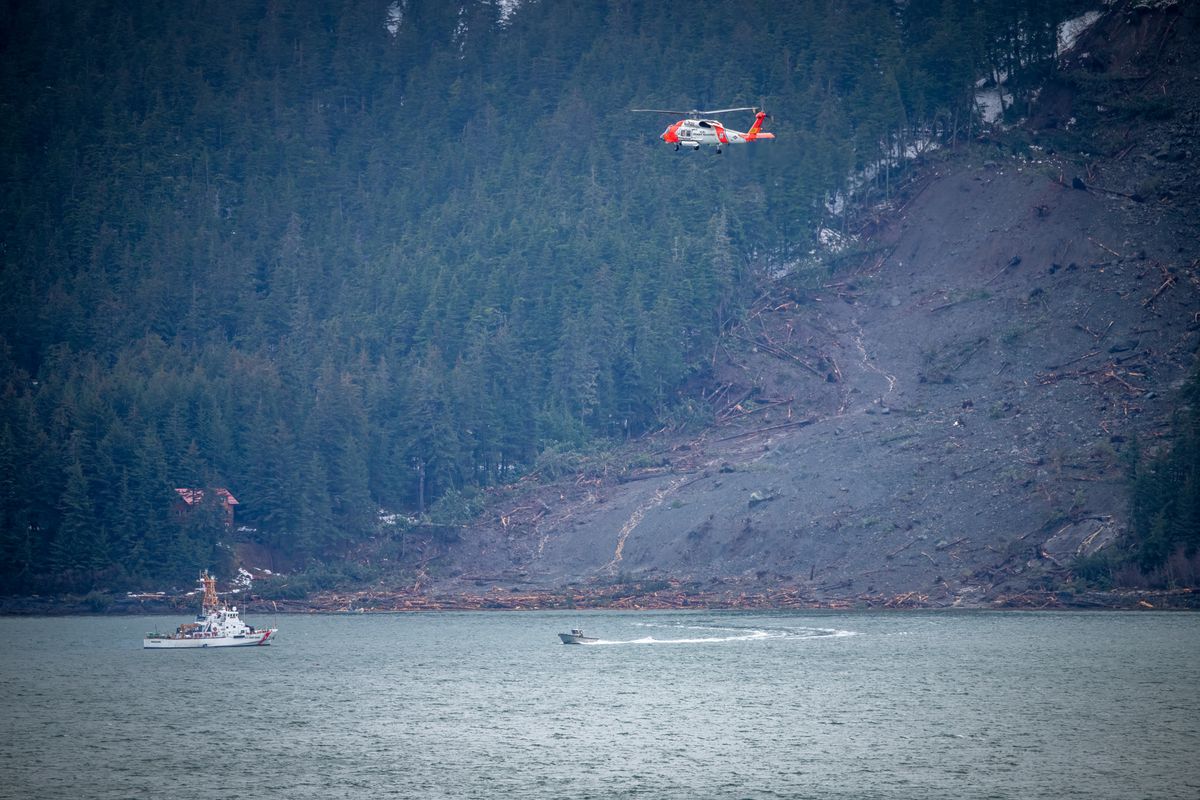 Search efforts were underway near the location of a landslide near Haines on December 3, 2020. (Tom Ganner photo)

Search efforts were underway near the location of a landslide near Haines on December 3, 2020. (Tom Ganner photo)

A kindergarten teacher and a local businessman were still missing Thursday evening in the Southeast Alaska town of Haines, one day after a landslide swept parts of a residential area into the harbor.

Search and rescue efforts were scheduled to end at dusk Thursday and were expected to resume Friday morning, the Haines borough mayor said.

With the ground unstable and unsuitable for a ground search, city officials said boats, helicopters and aircraft have been used to search for 23-year-old kindergarten teacher Jenae Larson and 30-year-old David Simmons, the interim director of the Haines Economic Development Corp.

David Simmons and Jenae Larson have been missing since Wednesday afternoon's mudslide in Haines. https://t.co/fYL5ZgxFre

Gov. Mike Dunleavy declared a state of disaster in Haines, where 2,500 residents have been coping with landslides and flooding after a record-breaking storm this week.

“I’ve talked to a lot of old-timers who’ve lived here all their lives, and they said they’ve never seen anything like it,” said Lance Caldwell, the local power operations manager for Alaska Power and Telephone.

The rain slackened on Thursday morning but was slated to return overnight, with another 1-2 inches forecast by Friday night. Snow was also possible on Friday morning, with the National Weather Service issuing both a flood watch and a winter weather advisory.

While landslides and flooding occurred across Southeast Alaska this week, no place has been harder hit than Haines. On Wednesday afternoon, a stretch of hillside between 550 feet and 600 feet wide destroyed four homes and plunged into the Pacific Ocean.

Simmons’ home was among the destroyed buildings, and Larson was renting an apartment above Simmons’ garage. Both were believed to be home at the time.

Six people were initially listed as missing; the other four were found safe.

“The good news is they’ve located four of the six people who were missing and they were found safe,” Megan Peters, a spokeswoman for the Alaska State Troopers, said Thursday morning. “The bad news is that two are still missing. It’s a huge, huge, tremendous tragedy for such a small town.”

The Coast Guard continues to provide support in Haines, Alaska, following landslides in and around the town, Thursday.

Matt Boron, the local foreman for the Alaska Department of Transportation and Public Facilities, said his crews are “still kind of in triage mode.”

They were focusing on the roads to the city’s airport and ferry terminal, and on Thursday afternoon cleared a single lane to the isolated Lutak neighborhood, where dozens of homes were cut off by debris flowing from the mountains above.

He worried Thursday that cooling conditions could cause some of the floodwaters to freeze.

The U.S. Coast Guard contributed help from the water and also from the air with a helicopter deployed from Sitka. The Army National Guard provided additional helicopter flights.

Commercial air flights were canceled Thursday, and the state ferry LeConte is scheduled to arrive Friday morning with additional heavy equipment and workers aboard.

Almost 7 inches of rain fell on Haines between 8 a.m. Tuesday and 8 a.m. Wednesday, according to a National Weather Service measurement. Another 1.92 inches fell by 8 a.m. Thursday.

The rain was part of a record-breaking storm that drenched Southeast Alaska and triggered landslides across the region. Warm conditions melted the snow on surrounding mountains and added to the runoff trickling downhill.

“With soils as saturated as they are, the potential for landslides will remain through probably next week. That’s the main concern,” he said.

Fullerton said the city has another concern — COVID-19. Officials are worried that the pandemic could spread to Haines as rescue workers arrive.

The City and Borough of Juneau performed rapid tests on rescue workers before they departed, and the city is urging responders to wear masks.

“We have two emergencies overlapping. We have zero cases of COVID in Haines,” she said. “We have all of these outside resources coming in. I’m very concerned and have asked all responders to of course wear masks, keep distance from Haines residents to the extent that they can.”

The Salvation Army, American Legion and local churches were helping families who were forced to evacuate. Counseling services were also available, the city said.

Schools and many businesses remained closed, and the city advised people to stay off the roads.