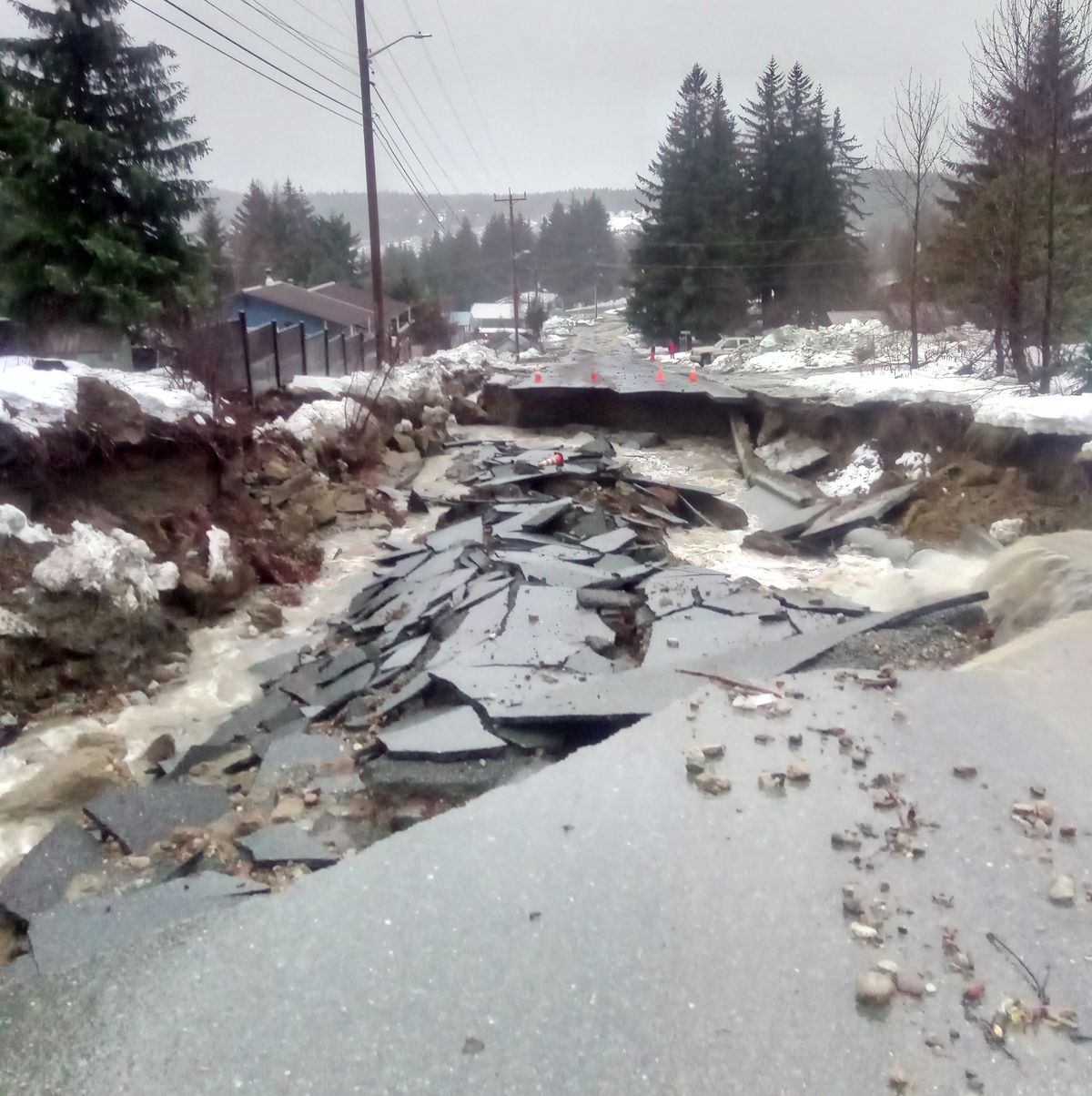 Many roads were heavily damaged in Haines after heavy rain and flooding on Wednesday. (Photo provided by Darwin Feakes)

Many roads were heavily damaged in Haines after heavy rain and flooding on Wednesday. (Photo provided by Darwin Feakes)

Editor’s note: Officials on Thursday said four of the six people reported missing after the landslide in Haines have been found safe. Read our latest coverage here.

Six people were reportedly missing Wednesday after a major landslide in Haines that prompted local evacuations and occurred as a record-breaking rainstorm triggered destructive avalanches, slides and flooding across Southeast Alaska.

Haines saw the worst of the damage. On Wednesday afternoon, a landslide traveled through the Beach Road neighborhood, which includes homes, the city’s cruise ship dock and Portage Cove State Recreation Site.

Mayor Douglas Olerud said the slide was about 600 feet long.

Interim Borough Manager Alekka Fullerton said Wednesday evening that according to the latest information available to her, six people remained missing, but she had also heard reports that some of the missing may have walked out of the landslide area. Olerud said he had heard conflicting numbers. Alaska State Troopers said six people were unaccounted for and four homes had been destroyed.

“There is approximately nine feet of mud and trees covering the area,” troopers said Wednesday evening. “(Search and rescue) operations have been suspended for the evening due to rumbling unstable ground.”

Search and rescue efforts lasted until nightfall, and troopers said mountain rescue experts from Juneau will be flown to Haines on an Army National Guard helicopter Thursday morning. Medics from Juneau’s Capital City Fire/Rescue and Juneau-based troopers will also travel to Haines.

The U.S. Coast Guard flew a helicopter from Sitka to Haines on Wednesday, a small boat was dispatched from Juneau and two Coast Guard cutters were preparing to sail, said Chief Petty Officer Kip Wadlow, a spokesman for the Coast Guard in Alaska, on Wednesday afternoon.

The city ordered an evacuation of the surrounding area after the slide because “residents are in immediate danger of another landslide.”

The municipal government declared a flooding emergency at 10:30 a.m. Wednesday and warned residents to stay off the roads because so many were washed out or blocked by landslides. The situation worsened as the day progressed.

Aaron Jacobs, a hydrologist with the National Weather Service in Juneau, said heavy rain was expected to continue through Wednesday night.

“The area is prime for more debris flows later this evening,” he said, using a technical term for landslides.

“Haines is going to be needing lots of prayers,” Mayor Olerud said in a written statement earlier Wednesday. “We have several roads that have washed out, mudslides, and houses flooding. Crews have been working all night but the amount of rain we are getting is making it difficult for them to address all the problems.”

The Haines Highway, connecting the city to Canada, was closed and the city’s airport was partially flooded. In the morning, the road to the local ferry terminal and barge dock was blocked by a landslide.

That separated the city’s emergency diesel generator from the city’s biggest fuel tanks, but by evening, a narrow path had been cleared for fuel trucks. The local radio station advised that people cut off from town by the landslide could request to be evacuated by boat. The signal was to shine a light into Lutak Inlet.

“We’ve got 30 people that we recently evacuated and brought into town by water, and they’re being taken care of and housed in local hotels,” Olerud said about 5 p.m.

Pictures taken earlier in the day showed Spruce Grove Trailer Park flooded to the level of the hatchback license plate on a partially submerged SUV. The city reported one water main had broken, its water treatment plant was running over capacity, and some residents were being advised to boil their water.

After the slide, Olerud said it will take weeks — if not months — to fully repair the damage, but he was grateful for residents who used their own tractors and heavy equipment to divert water and offer help.

“It’s pretty impressive living in a community where so many people don’t wait to ask to be helped. They just dive right in,” he said.

Even for the world’s largest temperate rainforest, this week’s storm has been exceptional: Almost a foot of rain fell on the small town of Pelican in a 48-hour period.

In Juneau, Tuesday was the wettest day since reliable record-keeping began in 1936. A measurement station at the city airport recorded 4.93 inches of rain on Tuesday, breaking a single-day record that had stood since 1946. The National Weather Service measured 6.54 inches at the airport within 48 hours.

High winds and record-high temperatures accompanied the rain in Juneau. The snowpack melted at higher elevations, contributing to localized flooding. The winds, which gusted above 60 mph at times, encouraged avalanches and mudslides and struck down trees, knocking out power.

In Juneau’s Mountainside Drive neighborhood, Jason and Kristy Backes started hearing alarming noises from the hillside behind their home on Tuesday afternoon. They packed suitcases, prepared to evacuate, and by 5 p.m., the slow-moving slide became visible, even in the dark.

“I looked out the back window and saw the logs and mud coming,” Jason Backes said.

The slide tore the deck from a neighboring home and dropped a sauna into their backyard.

Most alarmingly, it rechanneled a creek directly into their home.

“It sounded like somebody had a hose just dumping into our crawlspace,” he said.

The rain and wind arrived as part of an “atmospheric river,” a weather pattern that carries moisture, wind and warm air from the central Pacific Ocean in a narrow channel. The storm was predicted well in advance, allowing local and state workers to mobilize ahead of time.

At the Backes’ home, city workers — including Juneau Mayor Beth Weldon — arrived late Tuesday and rechanneled the creek away from the house.

Similar scenes took place elsewhere in Alaska’s capital city. A mudslide that blocked a highway and threatened a playground was diverted and removed before noon Wednesday. Heavy equipment operated by state and local workers was active throughout town.

Elsewhere in Southeast Alaska, more than 2 feet of water covered some roads in Gustavus, and “Hyder actually has been without power for two days because of heavy snow,” Cravens said.

In Skagway, Mayor Andrew Cremata said a landslide had blocked the road leading to the Klondike Gold Rush townsite of Dyea, and some basements were flooding. He said the situation was far less serious than the one facing Haines.

While Southeast Alaska experiences atmospheric rivers on a regular — if infrequent — basis, this one had all the right ingredients for an especially wet storm, Cravens said.