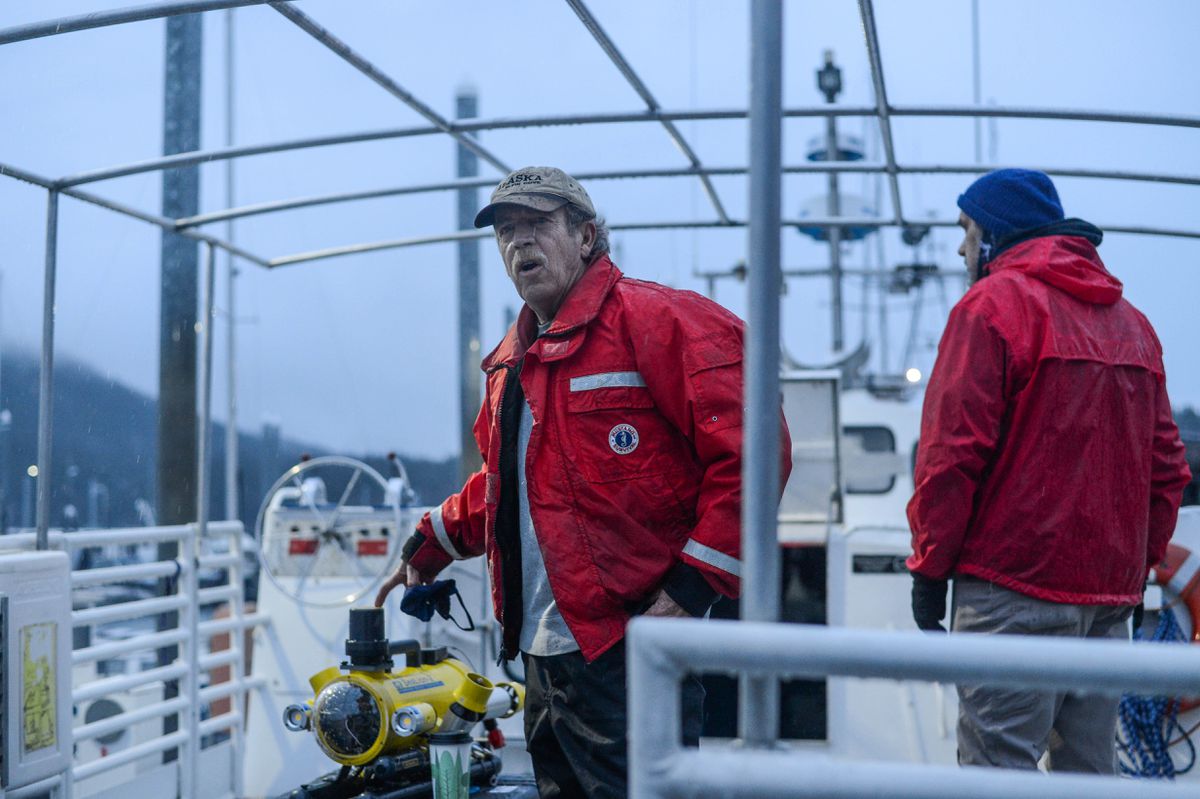 Tod Sebens prepares to sail out of Haines Harbor with a small crew and a remote operated underwater vehicle on Saturday morning, Dec. 5, 2020. (James Brooks / ADN)

Tod Sebens prepares to sail out of Haines Harbor with a small crew and a remote operated underwater vehicle on Saturday morning, Dec. 5, 2020. (James Brooks / ADN)

“We have a situation set up very similar to Wednesday. We have a snow base set up, and then it’s going to rain tomorrow,” said Alekka Fullerton, the Haines Borough’s interim manager.

“The worry is that it’s going to be more of what created this whole problem,” she said.

David Simmons, 30, and Jenae Larson, 23, remained missing despite four days of search and rescue efforts conducted mainly by boat and air because of the risk of additional landslides in Haines.

Simmons and Larson have been missing since a 600-foot-wide landslide swept through the Beach Road neighborhood Wednesday amid record-breaking rainfall.

Simmons’ home was in the direct path of the landslide, and Larson lived in an apartment above Simmons’ garage. Both were believed to be home at the time.

Elsewhere, about 50 households were evacuated because geologists fear additional landslides. Four homes have been destroyed but hundreds have been damaged, Fullerton said.

City and state officials had hoped that a brief weather window would allow geologists to view the local area from the air, allowing them to properly judge landslide risks, but several inches of snow fell at sea level Saturday, and more is expected at higher elevations. Low clouds limited their ability to survey from the air.

Earlier this week, an official from the Alaska Department of Transportation and Public Facilities said colder weather would make repairs more difficult. Equipment and workers who might otherwise plow snow are instead repairing culverts and highways. Flooded, low-lying areas might freeze.

[Amid landslide danger, Haines evacuees wonder when they can return home]

Mayor Douglas Olerud said he’s worried about water pipes that have been exposed by erosion.

“If they don’t get those covered up, they’re going to freeze and break, and you’re going to have a bigger event to deal with,” he said.

The National Weather Service issued a flood watch and a winter storm warning for the area.

At noon, Mayor Douglas Olerud told evacuees that the baseline rule is four days of good weather. If the rain and snow can stop for four days, conditions may be safe enough to return home.

As Olerud said those words, stirring the crowd, a steady downpour drummed on the roof of the American Legion Hall, which has become a hub for aid.

While city officials deal with damage to roads, utilities and homes, Alaska State Troopers and other state agencies are leading the effort to find Simmons and Larson.

Simmons’ girlfriend, Libby Jacobson, described him and Larson as “outstanding people who were driving forces for young people in Haines.”

Though it has been four days since they disappeared, Fullerton said volunteers have not officially abandoned the “rescue” part of their search and rescue mission.

“We specifically asked this morning how we will know when this operation changes from search and rescue to search and recovery, and (troopers’) response was, ‘We are not there yet,’ " she said Saturday morning.

Tod Sebens, a friend of Simmons, was using an underwater remote operating vehicle to search debris that was pushed into the ocean.

He said he’s afraid of what he might find, but he wants closure for himself and his hometown.

With search volunteers still unable to enter the Beach Road slide area on foot — some searchers combed areas exposed by a low tide — they instead trained for swift-water rescues, something that could be needed if additional landslides occur.

“The SAR efforts are the top of the priority list. Those have been hampered with weather conditions, slide conditions, and so we want to have as many resources available for them as they need,” Olerud said Saturday morning. “We don’t want to pull resources off that, but we are focusing other additional resources on areas where there is potential slide activity.

“While we’re cognizant of the one slide, we want to make sure that everybody’s safe in the other areas that have potential for hazard.”

A homegrown teacher and a ‘gregarious’ business leader

Larson is in her first year teaching kindergarten at Haines’ school after graduating from the University of Idaho earlier this year.

The start of her teaching career marked a return home for Larson, who grew up in Haines and was among the 22 members of the town’s 2016 high school class.

“She was just around little kids all of her life, and I guess instead of hating it, she loved it, and that’s what she decided to do as a career,” said Matt Boron, whose family remains close friends with Larson’s.

Simmons grew up in Chico, California, and friends and family describe him as “gregarious.” He had traveled to 77 countries before settling in Haines in 2017 and has worn many hats here, beginning a small shuttle service company between Haines and Whitehorse, Yukon, called Hinterland express, and most recently as part-time director of Haines Economic Development Corp., where he was appointed Aug. 1.

He bought his house on Beach Road in April — a home he shared with his girlfriend — and worked with his dad last winter to build the apartment rental above the garage that Larson and her boyfriend lived in.

His father, Randy Simmons, described his son as friendly and understanding. The two spoke often, most recently on Wednesday, about two hours before the slide took Simmons’ house into the water.

“He was always open and understanding and empathetic and people are drawn to that,” Randy Simmons said. “He makes people feel special. David never met a person that wasn’t his friend.”

David’s father was already bracing for the worst outcome.

“People keep saying ‘Pray for David’ and, you know, don’t give up hope. His house was crushed, and he was in it. And it’s in the bottom of the ocean,” Randy Simmons said. “David is not alive. I mean, I knew that as soon as I saw the pictures on Wednesday. He’s gone. And I’m not going to avoid the fact that my son is dead.”