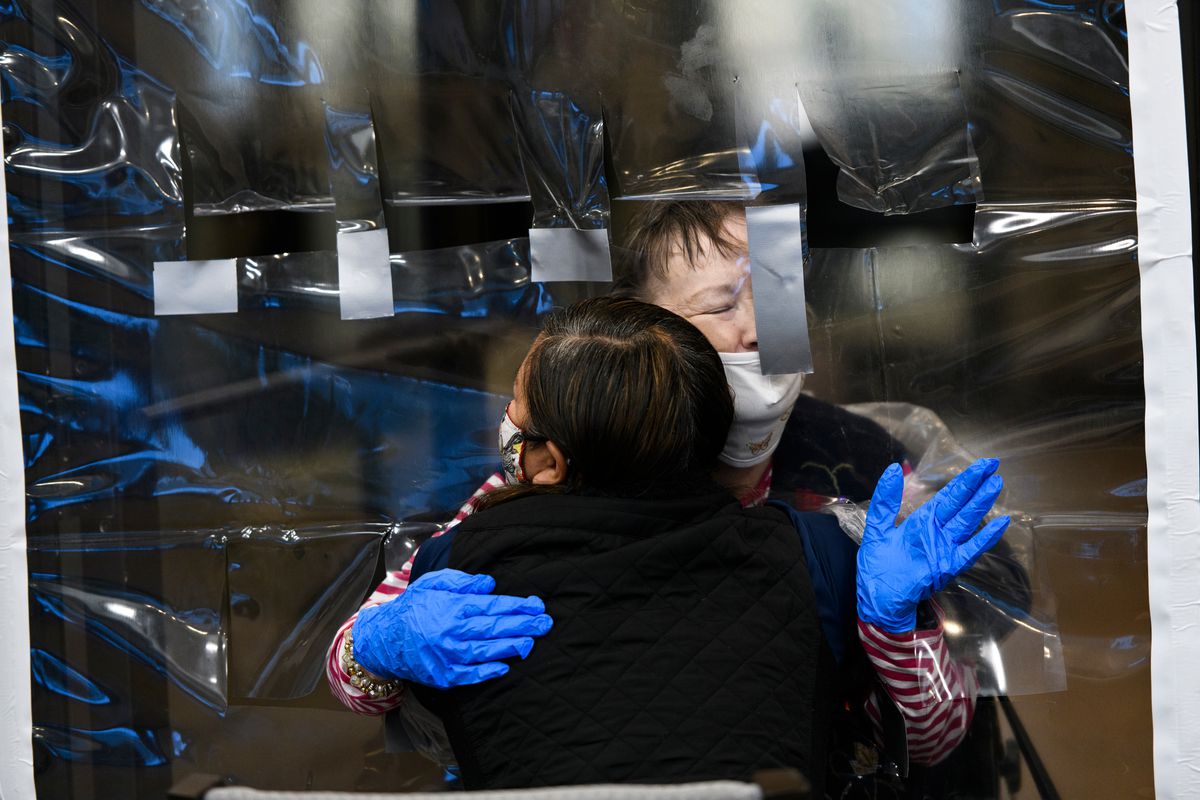 Cordelia Scott, facing, hugs her daughter-in-law, Pheng Scott, through a sheet of plastic at Aspen Creek, an assisted living center, on December 2, 2020. This was the second session of the "hugging wall" at Aspen Creek, designed to keep its senior population safe from COVID-19 but in contact with family members. (Marc Lester / ADN)

Cordelia Scott, facing, hugs her daughter-in-law, Pheng Scott, through a sheet of plastic at Aspen Creek, an assisted living center, on December 2, 2020. This was the second session of the "hugging wall" at Aspen Creek, designed to keep its senior population safe from COVID-19 but in contact with family members. (Marc Lester / ADN)

Rita Garris, 68, said life during the coronavirus pandemic has felt a little like living in a space shuttle.

She has spent the majority of the last nine months inside her room at Providence Extended Care in Anchorage, and hasn’t been able to leave the building since March.

When visitors come, she says hello to them through a closed window. Instead of church, she calls her chaplain on the phone when she needs to talk.

“I stay in my bed most of the time,” she said. “Thank God we have our phones.”

Garris, who is paraplegic and also has post-traumatic stress disorder, is one of hundreds of long-term care residents in Alaska who the CDC has classified as “high risk” for severe infection from COVID-19, and who have spent the majority of 2020 in confinement.

She said she’s thankful to the workers at Providence for protecting her and other residents from the virus, but life without seeing family or spending time out in the world has become more and more difficult as the months wear on. She reads the Bible to get herself through her days.

“They kept us safe, and they do what they can,” Garris said. “But sometimes I can hear cries of people wanting to get out. (The staff) comforts them, sings to them, reads to them. Whatever it takes to be a friend.”

She lives in one of 20 nursing homes across Alaska. There are also more than 700 assisted-living homes statewide that have residents who generally require less around-the-clock care.

Across the country, elder-care facilities — and nursing homes in particular — have seen the worst of the pandemic. According to The New York Times, nearly 40% of U.S. virus deaths have been linked to nursing homes, due to the deadly combination of some of the highest-risk people living in close proximity.

For many months, Alaska has been more successful than other states at keeping the virus out of its nursing homes and assisted living facilities.

In part, that’s because Alaska kept its case counts lower than most of the country through the summer, and Alaska also has fewer nursing home beds per capita than any other state, health officials say.

“Nursing homes in Alaska have done such a good job with the protocols in place of keeping COVID out of the building,” said Jared Kosin, president of the Alaska State Hospital and Nursing Home Association.

Although some have had cases crop up in residents or staff, “they’ve managed it really effectively so far,” Kosin said.

But as Alaska’s latest surge has continued to grow, the state’s elder-care homes have not fully evaded the virus.

“We have ongoing COVID popping up in assisted-living facilities,” said Dr. Bruce Chandler, Anchorage medical officer for disease prevention and control, during a media briefing on Friday.

Even though most facilities have been closed to visitors since March, “we regularly find there’s a staff member, often asymptomatic, who’s acquired the infection outside the facility and then comes to work.”

“There’s so much (virus) in the community, it’s hard to ensure that no one’s coming into your facility without COVID,” he said.

Assisted-living homes are also subject to less strict federal guidelines than nursing homes, and Chandler said he worries that not enough testing is being done at every home.

Suffering, even without COVID-19

By December, more than 70 assisted-living facilities in Anchorage alone had seen cases involving either a resident or staff member, according to Chandler. Twenty are currently dealing with positive cases.

Even when the homes are able to keep the virus at bay, residents are still suffering, administrators say.

Tina Rein, director of the Denali Center, a long-term care facility in Fairbanks, described the stark impact of pandemic precautions — such as reduced in-person contact or visitation — on a population that was already somewhat isolated.

”I feel like we have people dying of COVID that have never had COVID,” Rein said. “They’re dying of loneliness.”

Denali Center experienced one of the state’s first outbreaks in March. During that outbreak, three residents tested positive but none died.

Rein explained that early in the pandemic, the facility built a plexiglass visiting booth with three sides, so that the residents could see their loved ones through the glass.

“But even though we’re trying to find a solution, and it’s better than nothing, it feels like jail,” she said. “Isn’t that how you visit someone in jail?”

Rein worries that the upcoming holiday season will just enhance “the absence of living,” she said.

She said she understands the precautions are necessary but it doesn’t make the situation any easier.

“These poor people haven’t been able to hug their daughter or hold a new grandchild because we can’t seem to get (the virus) under control in our community,” she said. “And that’s really bad.”

Barbara Bigelow, an administrator with South Peninsula Hospital Long Term Care in Homer, also said that the most difficult thing for her residents right now is the social isolation.

She said that based on conversations she’s had with others in her profession, she’s not alone in her concern.

“There are many of us who are starting to say some of the ill effects of isolation is probably having as profound an effect on our residents’ quality of life and longevity, as well as keeping them free from COVID,” she said. “It’s very, very difficult. And it’s heartbreaking for me.”

She said that while there’s been a lot of encouragement for virtual visits, technology can seem alien to some residents, particularly those with dementia.

“To see your son or daughter on a little computer screen, when you know they live 10 miles down the road, that’s been hard for some residents,” she said. “They don’t really understand why they aren’t here.”

There is some hope on the horizon: A federal advisory board this week recommended that the first doses of a COVID-19 vaccine expected this month be prioritized to long-term care residents and front-line health care workers.

Until that happens, many homes are finding creative ways to cope.

One Anchorage assisted-living facility recently set up “hugging wall” that makes contact possible with a barrier of plastic sheeting.

Aspen Creek, on Dowling Road, on Wednesday held its second hugging wall session in a side room adjacent to the center’s commons space. It’s an attempt to balance protection of its residents with their need to be with their families, according to executive director Anna Houser.

To minimize the potential for virus transmission, visitors wear arm-length gloves to reach through slots in the sheeting to hug or hold hands with their loved ones.

Some people thought it seemed silly before they tried it.

”Your first instinct is to be like ‘You want me to hug somebody through a piece of plastic?’ But until you make that contact and realize, ‘I actually get to touch my person. Yes, there’s limitations, but for the first time in eight months I’m hugging them.’ Then all of a sudden it changes,” said Houser.

One of the residents to receive a hug was Alene Robinson, whose 99th birthday was last week.

”Oh, you feel good. You feel so good,” Robinson told her daughter, Katie Froland, as they held each other’s hands.

”You know, this is weird, but it’s kind of cool,” Froland said.

Houser said the home has been fortunate to not have any COVID-19 cases yet among staff or residents.

”Every day that we don’t have it feels like a gift,” Houser said. “But that’s not to say that it couldn’t still happen.”

When it was time to go and let the next family use the wall, Robinson said goodbye to her daughter.

”Honey, I love you so much,” Robinson said.

Pheng Scott, who waited outside for her chance to hug her mother-in-law, Cordelia Scott, said the contact is meaningful — and not just for the residents of the center.

”I know it will make her day. She’ll probably get emotional in there,” Pheng Scott said before she walked inside. “I’m actually kind of getting emotional now.”