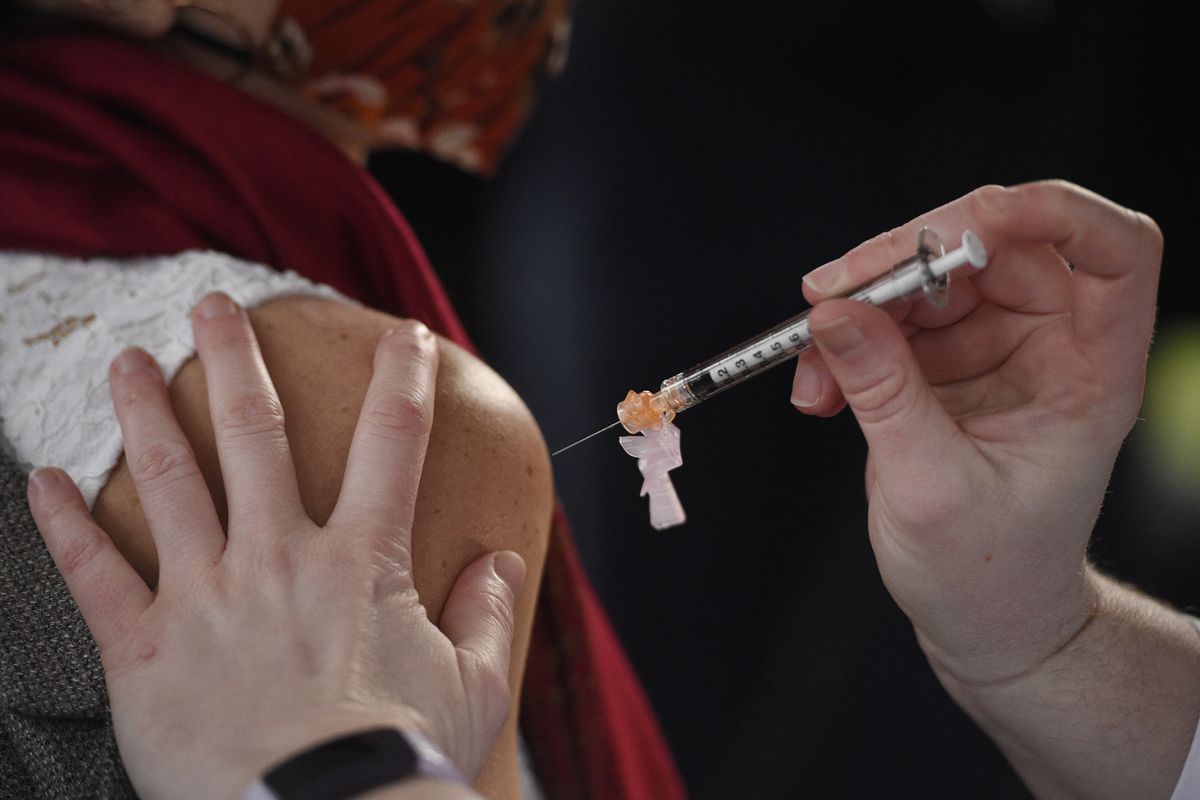 The first Alaska shipment of COVID-19 vaccine arrived Sunday night in Anchorage, ferried from Michigan via a UPS plane to a state with a distribution strategy that hinges on air service.

Alaskans — at least those in health care or assisted living settings — are expected to start getting COVID-19 shots quickly, according to the Alaska Department of Health and Social Services. Shipments will go out to facilities around the state through Wednesday.

The Department of Health and Human Services did not announce the arrival of the UPS flight until Monday morning and is controlling media access to images and information about the ongoing delivery and distribution of the vaccine.

It’s still not known when the general public will be able to get vaccinated, and challenging logistics lie ahead when it comes to getting vaccine to remote communities scattered across the nation’s only Arctic state. Much of the distribution will rely on aircraft, though officials Monday said ATVs and snowmachines could ferry shipments to smaller villages.

It’s also not clear how many Alaskans will choose to get vaccinated.

Gov. Mike Dunleavy has said the state will not mandate vaccinations.

The vaccine made by Pfizer and BioNTech received emergency authorization Friday from the U.S. Food and Drug Administration. UPS and FedEx started flying loads of the vaccine Sunday from Pfizer’s plant in Michigan to 636 locations across the United States, the state said Monday morning.

“It’s been an emotional day for me,” Dr. Anne Zink, the state’s chief medical officer, told reporters on a call Monday afternoon.

Zink, who still works as a physician, described the “stress and fear” experienced by colleagues during a recent emergency room shift.

The state sits on the cusp of being able to protect its most vulnerable, especially long-term care residents, Zink said. But so many people are still sick. In total, 175 Alaskans have died from the virus.

“We do know that vaccine allocation will still be slow and rollout will not be available to everyone initially,” she said. “But to be able to get it out to those who are most vulnerable and exposed initially is an incredibly exciting place to be.”

Citing unspecified security reasons, officials on Monday’s media call did not share specifics regarding the numbers and locations of vaccines in the state. They did not answer a question about when and where the first Alaskans to receive the vaccine will be.

“We do anticipate that some Alaskans will be vaccinated today,” Tessa Walker Linderman, who co-leads the state’s COVID-19 vaccine task force, said Monday. The Alaska Native Tribal Health Consortium is partnering with the state.

The COVID-19 vaccine comes as state officials implore Alaskans to wear masks and practice social distancing to combat continued surges in new infections. Outbreaks are occurring in Alaska’s most populous cities and some of its smallest, most remote communities.

[Coronavirus Q&A: Can I get the vaccine if I’ve already had COVID?]

The Pfizer vaccine requires ultra-cold storage and two doses, 21 days apart. The state is receiving 35,100 doses. Another vaccine, produced by Moderna, is expected to be considered for authorization this week. Alaska is expecting another 26,800 doses at that point.

The first recipients in Alaska will be hospital-based front-line medical workers at highest risk for COVID-19 infection, followed by long-term care facility residents and staff, state officials say. Those individuals include people who work on the front lines in the state’s hospitals, which officials hope will alleviate the state’s ongoing staffing crunch as medical workers are forced to quarantine or isolate due to positive tests or recent exposures.

Next will be EMS and fire personnel providing medical services, community health aides and practitioners, and people required to perform vaccinations.

In total, that makes up roughly 25,000 people slated to receive the first rounds of vaccines in Alaska, state health officials say. The state’s allocation committee will meet to decide additional groups who are eligible.

There are additional vaccine supplies coming to the state for military members, officials say.

On paper, Alaska looks like it’s getting more doses per capita this month than any other state. But that’s misleading, Zink said: Alaska’s count includes federal Indian Health Services numbers because tribes here, unlike in other places, asked the state to distribute their share. The federal government has allocated 11,700 doses of vaccine for the Alaska Tribal Health System.

Because of the challenging logistics here, Alaska is also getting all of its vaccine for December in one batch.

Packages of the Pfizer vaccine come with 975 doses at the smallest, so the state will further break down those materials to get them out to communities that will need far fewer, Walker Linderman said. Communities off the road system face significant hurdles for vaccine distribution. Keeping the vaccines cold for a certain amount of time and winter weather add complications.

Hospitals and health-care facilities that ordered vaccine direct from Pfizer will receive direct shipments, state officials say. The rest of the state’s allocation will go to the state immunization program that will store the vaccine at ultra-low temperatures before it’s distributed across the state.

Members of the public have expressed wariness about the vaccine safety, and health care workers are no exception. A state survey showed 50% to 60% of hospital providers are ready to get vaccinated immediately.

At Alaska Native Medical Center, where workers are caring for “very sick people right now,” 80% of front-line employees who opened emails about vaccinations scheduled an appointment, according to interim administrator Dr. Bob Onders.

Administrators at Alaska Regional Hospital are working on a plan to begin distribution to employees who chose to get it in coming days, a spokeswoman said.

A shipment of 975 vaccines was expected to arrive at Juneau’s Bartlett Regional Hospital on Tuesday if weather allows, officials there said Monday. The hospital will keep 500 for staff vaccinations and the remaining vaccines will go to first responders, medical clinics, and nursing home or elder care facilities.

Those expected to get the first jabs include nurses, doctors and possibly other workers like respiratory therapists and cleaning staff. Bernstein estimated a quarter of the staff will be able to get vaccinated this month, with about 2,000 doses expected from the two drugmakers. He also expected staff and residents at the hospital’s long-term care facilities will get vaccinated.

The vaccinations should allow Providence to reduce visitor restrictions in the future, he said. “It really affords us a feeling of a light at the end of a tunnel, particularly at at time when COVID community transmission and cases are at the highest level we’ve seen during the pandemic.”

Members of the public with general questions about the COVID-19 vaccine camail vaccine@alaska.gov or call 907-646-3322. State officials asked people with specific medical questions to consult their providers.

— The ADN’s Marc Lester contributed to this story.