52,900 more doses of COVID-19 vaccine will be headed to Alaska in January 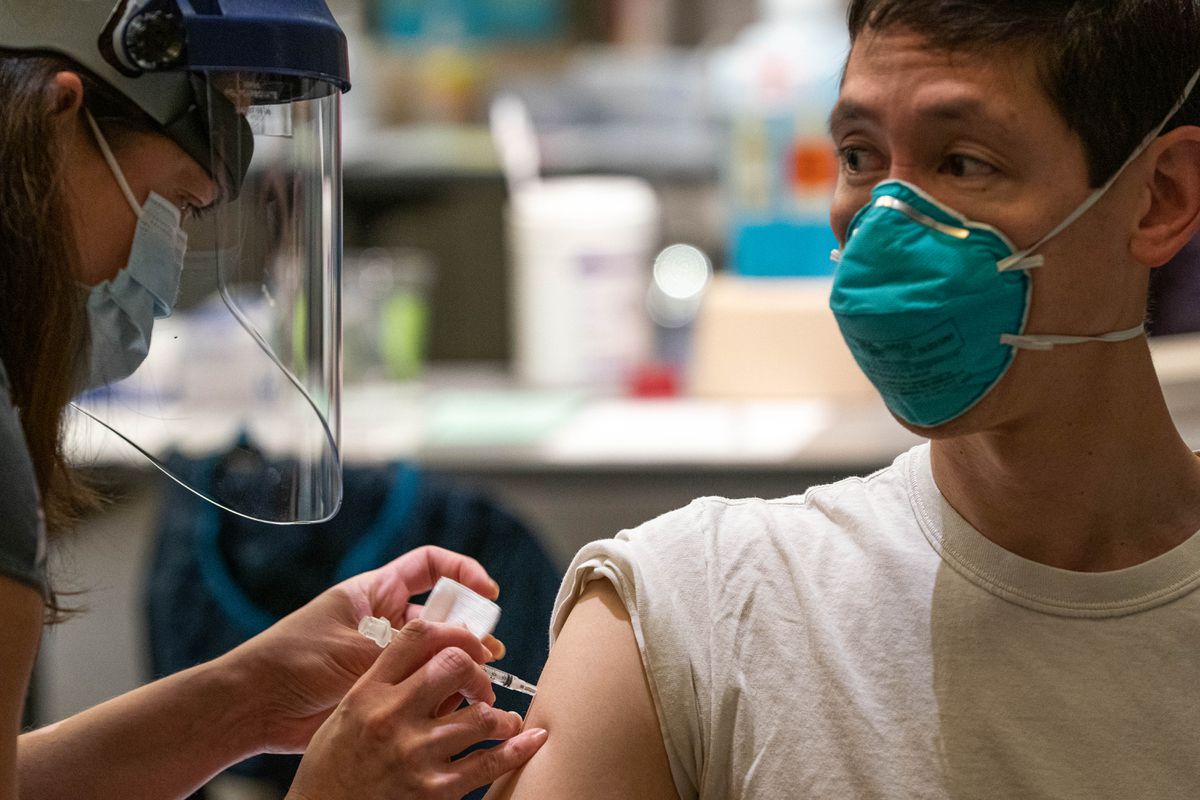 That’s about 7,000 less than the amount received in December, but close to what was expected. Health officials didn’t say exactly when the doses will arrive, but it will likely be early in the new year.

These vaccine doses come on top of shipments of the required second doses of each vaccine, which will also be shipped out next month.

The state is currently finalizing recommendations from its advisory committee that will determine which Alaskans to include in the next round — Phase 1B — of COVID-19 vaccination, and plans to share those decisions with the press and the public on Thursday, said Tessa Walker Linderman, who heads up the state’s vaccine task force.

“We’re just taking an extra day to finalize (those recommendations) and make sure it’s good to go,” she said. “We will be working through the weekend to plan what the rollout for Phase 1B will look like.”

Alaska, unlike other states, receives its vaccine in monthly rather than weekly shipments, which makes it easier for the state to arrange transportation to far-flung regions of the state.

The January allotment will include 27,300 doses from Pfizer and 25,600 from Moderna, and adds up to 52,900 doses — slightly less than the approximately 60,000 doses the state received in December.

The reason the amount is lower this month has to do with how much vaccine is available from the manufacturers, officials say.

The state’s allotment includes 16,200 doses of vaccine allocated by the Indian Health Service but does not include additional doses that will also likely come for Veterans Affairs and the Department of Defense.

Who will get that vaccine?

Many but not all interested and eligible people from this initial group have already been vaccinated, state officials said.

Beginning Jan. 4, another tier of people in the state’s first phase will start receiving vaccines. That group includes people who work in health care settings who are at the highest risk of getting COVID-19, are considered essential to the health care system and do regular work that can’t be postponed or done remotely.

Appointments for that group went live on the state’s vaccine website (covidvax.alaska.gov) Wednesday. A link on that site will show clinics, providers and available dates based on location.

That state site is also where people can review their vaccine eligibility.

Additionally, Indian Health Service beneficiaries should contact their providers to see if they are eligible for vaccine now, since tribes have the authority to distribute their IHS allocation as they choose, and in some cases are moving through the tiers more quickly.

Thursday’s announcement will concern Phase 1B eligibility, which will likely begin either late January or early February, Walker Linderman said.

A federal advisory committee had said earlier this month that the next phases should include certain front-line essential workers and people 75 years and older, followed by people 65 years and older, plus young people with high-risk medical conditions that cause increased risk of severe COVID-19 infection.

But it is up to individual states to tailor those recommendations by deciding which workers to classify as “essential,” and how to break down the groups further into additional tiers.

At a public hearing on Monday, nearly 50 Alaskans from a wide range of industries and backgrounds — including teachers, older adults and seafood industry workers — advocated to be included in the next phase.

The Alaska Vaccine Advisory Committee has also received nearly 400 written comments from members of the public.

Alaska has so far vaccinated over 13,000 people, according to a state tracker last updated on Monday. Nationwide, more than 2 million have received a dose.

Bumps along the way

Alaska’s vaccine rollout hit a snag earlier this month when a health care worker in Juneau and another in Fairbanks both experienced severe allergic reactions to the vaccine.

Two of six anaphylactic reactions reported by the federal Centers for Disease Control and Prevention have so far occurred in Alaska, although it is possible there may be others in other states that have not been reported yet, said Dr. Liz Ohlsen, a physician with the state health department.

There are no updates on an ongoing federal investigation on why the reactions have occurred, Ohlsen said.

“We should find out a lot more over the next few weeks as CDC collects and analyzes data,” she said Wednesday. “Currently, we do not think that the vaccines in Alaska are different in any way, so it may be chance that we just had two of the first to be recognized and reported.”

Ohlsen added that despite the reactions, vaccine uptake has been generally high among Alaska health care workers and others who are currently eligible.

And while only about a quarter of the state’s initial vaccine shipment has so far been put in Alaskans’ arms, Ohlsen said distribution was likely to pick up speed in the coming weeks.

“Our team in Alaska is working tremendously hard to get vaccine to Alaskans as quickly as we possibly can,” she said.

According to a national tracker Wednesday, Alaska has the third-highest per capita vaccination rate in the country.