Alaska’s population drops for the 4th year in a row, extending record losses 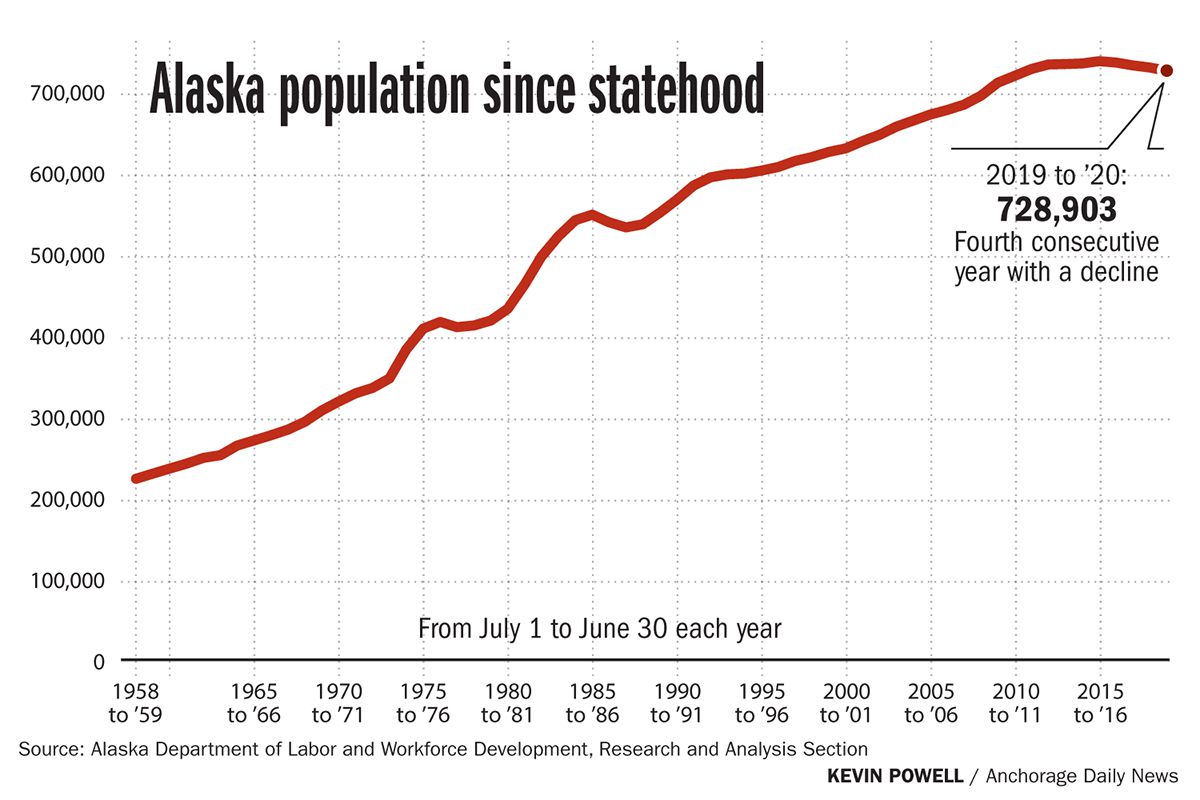 Alaska’s birthrate continues to decline and more people are moving out of Alaska than into it, according to a new annual estimate from the Alaska Department of Labor and Workforce Development.

As of July 1, 2020, Alaska is estimated to have 728,903 residents, the lowest figure since July 2011. Alaska’s population has declined for four consecutive years, the longest string of declines since modern recordkeeping began in 1945.

According to the state data, 8,873 more people moved out of Alaska than moved into it between July 1, 2019 and July 1, 2020. It’s the eighth year in a row that emigration outpaced immigration. Birth rates fell and death rates plateaued during the same period, leading to a decline in “natural increase,” which is at its lowest level since 1968.

These figures are published annually by the state using Permanent Fund dividend data, information from the Department of Defense and surveys of “group quarters” — apartments and other communal living facilities. It does not include information from the 2020 census, which is expected to be available later this year. The data count only people who live in Alaska permanently.

State demographer David Howell, who compiled the annual report, said the most surprising thing to him is a surge in emigration among the Baby Boomer generation, those between 56 and 74 years old in 2020.

“It’s been kind of this million-dollar question: We had all these Baby Boomers move up here in the ’80s, and it’s like, what’s going to happen when they retire? Everybody’s kind of been wondering that. And I think we’re starting to see this pickup in them actually leaving the state,” Howell said.

Even with the increase in outmigration, the number of Alaskans 65 and older grew by 4% and Alaska’s median age rose to a new record high: It’s now 35.7 years old, up two-tenths of a year from 2019.

At the opposite end of the population chart, the number of new babies in Alaska is dropping fast, mirroring national trends. Between July 1, 2019 and the same date in 2020, there were just 9,634 new births, the lowest figure since 1979-1980.

According to figures published by the Centers for Disease Control and Prevention, the state had the third-highest fertility rate in the country in 2019 and was well above the national average. State estimates show the gap between Alaska and the rest of the nation has been gradually shrinking.

Population estimates matter because they provide a window into what state and local governments might need in the next few years. Businesses can use them to determine the size of their potential market.

“That lack of births is really starting to show up,” Howell said, “and what will that mean for the school-age population coming, you know, in the next five, 10 years? It’ll just kind of be trickling through the age groups.”

State economist Neal Fried has repeatedly written about the connection between Alaska migration and the national economy: When conditions are bad Outside and good in Alaska, in-migration beats out-migration. When the opposite is true, the number of people leaving the state exceeds the number of people moving here.

There haven’t been many years when unemployment was high both Outside and inside Alaska, as is the case during the coronavirus pandemic.

The pandemic has reduced the number of people moving anywhere, he said, but the months between March and July 2020 make up only a fraction of the period used in this year’s population estimate.

“You wouldn’t see a large impact in these estimates from COVID,” Howell said.

The population of the Fairbanks North Star Borough grew by 1,064 people as Eielson Air Force Base began hosting a new squadron of F-35 fighters. The fast-growing Matanuska-Susitna Borough saw an increase of only 523 people between 2019 and 2020, but Howell said that relatively small increase is because the number of people at Goose Creek prison fell in the state’s estimate.

The population of the City and Borough of Juneau is 31,773, the lowest since 2010, and the populations of the Kodiak, Ketchikan and Sitka boroughs also fell.