No spill reported after tug strikes oil tanker in Valdez 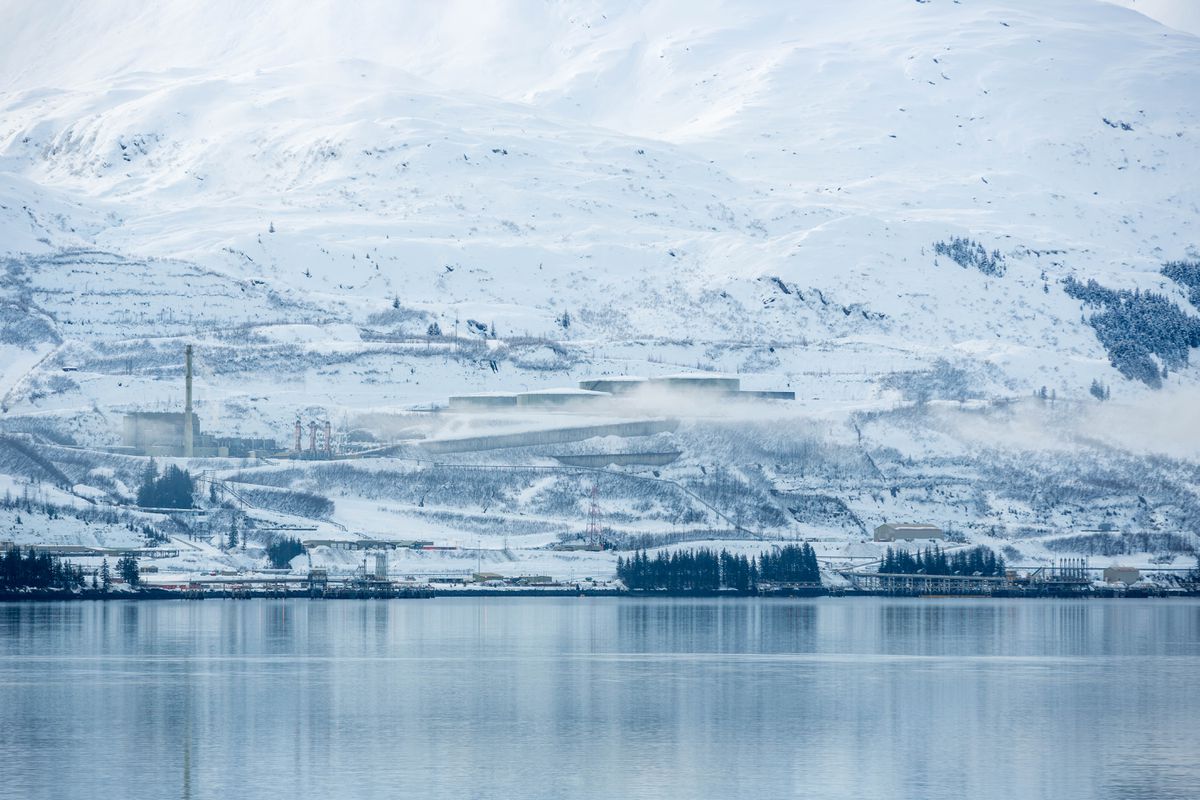 A tugboat struck the Polar Endeavour oil tanker shortly before midnight on Jan. 11 at the Valdez Marine Terminal, gashing the hull of the ship and injuring one crew member on the tugboat, officials said. No oil spilled in the accident, now under investigation by the U.S. Coast Guard.

The event occurred as the tugboat Courageous approached the Polar Endeavour, which was stationary at the dock. The tanker was loaded with oil and was prepared to leave with the help of tugs, officials said.

Brooke Taylor with the Prince William Sound Regional Citizens’ Advisory Council, mandated by Congress to help prevent a repeat of the 1989 Exxon Valdez oil spill, said the Courageous had “runaway,” meaning it was out of control before striking the Endeavour.

Alyeska Pipeline Service Company, which operates the terminal, reported the incident to the Coast Guard and the Alaska Department of Environmental Conservation, said Michelle Egan, an Alyeska Pipeline spokeswoman.

Ballast seawater that leaked from the tanker into Prince William Sound was inspected and did not contain oil, she said.

“We’re working really closely with the Coast Guard and ADEC and the mariners involved, and we want to ensure the best possible (spill-prevention and response) system in Prince William Sound,” Egan said. “We’ll take a close look at the circumstances and make adjustments.”

Egan said the injured tug crewman saw a medic on the boat, and was later taken to a clinic to see a doctor and to have an X-ray. She could not confirm additional details about his condition.

“The crew member was discharged and sent home,” said Egan.

“No pollution was reported and there was no impact to Valdez Marine Terminal operations,” said Melissa McKenzie, a public affairs specialist with the Coast Guard.

Officials with Louisiana-based Edison Chouest, the tug’s owner, did not return requests for comment Tuesday.

The marine terminal is about 100 miles east of Anchorage in Prince William Sound, where 11 million gallons of oil spilled in the 1989 Exxon Valdez oil spill. Oil produced on Alaska’s North Slope, around 500,000 barrels daily, is transferred onto tankers there for transport to refineries, usually on the U.S. West Coast.

The Alaska Department of Environmental Conservation is not part of the investigation. The Coast Guard has jurisdiction over vessel collisions in the area, said Crystal Smith with the state agency.

Smith said the gash occurred about 10 feet above the water line and was estimated to be between 1 foot and 2 1/2 feet in length.

The state agency is gathering information to learn what happened to avoid a similar incident in the future, Smith said. It would be investigating alongside the Coast Guard if oil had spilled into water, she said.

The 900-foot-long oil tanker was built in 2001 and is owned by ConocoPhillips, Alaska’s leading oil producer.

Both vessels have been inspected by the Coast Guard since the accident, Taylor said.

On Jan. 12, the Coast Guard cleared the tug to return to service. Alyeska won’t allow the tug to be assigned to ship-assist duties or tanker-escort roles until a documentation and assurance process is complete, Egan said.

“What happened with the tug Courageous is unacceptable and we are taking it very seriously,” she said in a statement. “Our investigation continues and we are working closely with federal and state regulators.”

The tanker underwent repairs and an inspection, Egan said. The Coast Guard on Monday cleared it to return to sea.

Oil tankers at the terminal are required to be double-hulled since the Exxon Valdez spill, Taylor said. That allows the cargo, millions of gallons of oil, to be stored in an interior, protected layer. Ballast water outside that shell is used to help steady the ship during oceangoing trips.

Tugs are vital to the safe movement of oil-laden tankers in the sound, Taylor said. It’s critical to understand what went wrong to prevent spills, she said.

“Without knowing the actual cause of the situation, there’s a couple of layers of concern that could exist,” Taylor said. “If it is mechanical cause, can they pinpoint what that cause was, correct it and make sure it doesn’t happen on a different tug? If it was human error, what happened, what safety measures may not have been followed or is something not covered by current procedures? What can be enacted that this type of human error doesn’t happen again?”

Alyeska and the state did not issue a public statement about the accident because no oil spilled, Egan and Smith said. Egan also said there was no environmental damage.

The Daily News confirmed and first reported on the accident after receiving tips from readers.

Edison Chouest Offshore in 2018 took over oil spill prevention and response duties at the port. The service had previously been provided for decades by Crowley Marine Services, a Florida-based company.

During the 2018 transition, another Edison Chouest tug, the 105-foot Ingot, struck the double-hulled tanker Florida during a docking procedure. It left a dent 20 inches long, 6 inches wide and 3 inches deep in the tanker.

Two days later, Edison Chouest’s 140-foot escort tug, the Challenger, reported touching bottom as it helped a barge anchor up. A work skiff tied to the barge was caught between the larger vessels and damaged.

Both of those incidents in 2018 prompted Coast Guard investigations and generated concerns about training and equipment as Edison Chouest took over operations.