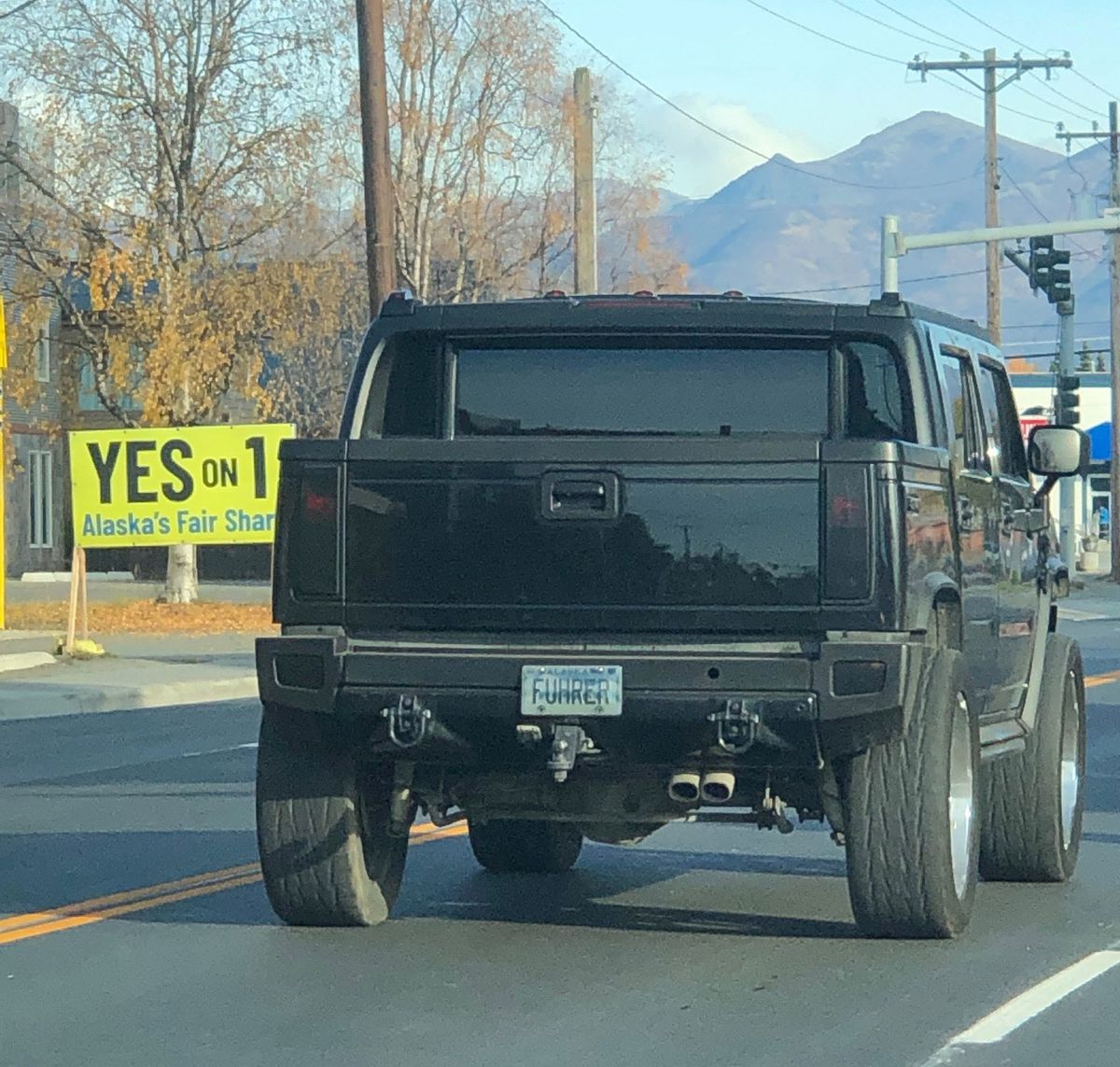 Back in October, Anchorage attorney Eva Gardner was driving down Fireweed Lane when she spotted a Hummer SUV with tinted windows and a personalized Alaska license she found chilling.

“FUHRER,” it said, on a familiar background of snowy blue and white mountains.

Gardner is Jewish. Members of her grandfather’s family were killed in the Holocaust. Seeing the license plate made her feel like there might be people in her community that “I don’t encounter ... but would probably like to see me dead,” she said in an interview recently.

That night, Gardner drafted an email to the Alaska Division of Motor Vehicles asking for the license plate to be recalled.

“I live in Anchorage and am writing to complain about a personalized license plate I saw today. The text is ‘FUHRER,’ a word that is effectively synonymous with Adolf Hitler, leader of the Nazis who was responsible for millions of genocidal deaths, mostly of Jews,” Gardner wrote in the email. “You can confirm this through a simple web search of the word.”

“I’m shocked the state allowed this blatantly anti-Semitic word to be used on a license plate and request that it immediately be pulled,” she continued.

The day after Gardner reached out to the DMV in October she received a stock response confirming receipt of her email. That’s the last Gardner heard of her complaint. She figured that would be the last she’d see of the license plate.

“It didn’t seem even possible they would leave it out there,” she said.

But over the weekend, a similar Hummer with different Nazi-referencing plates surfaced in Anchorage, drawing more questions and far more attention.

Now the state says it is investigating how the plates were issued to begin with and Gov. Mike Dunleavy has removed Jamie Allard, a conservative Anchorage Assembly member, from her position on the Alaska Human Rights Commission over comments she made on social media about the license plate controversy.

Alaska has strict rules about what can and cannot be displayed on a personalized license plate issued by the state, codified in state administrative code. References to violence, drugs, law enforcement, race, ethnicity, gender, sexual orientation and other government entities are prohibited, and the DMV regularly rejects vanity plate applications for obscenity.

Matt Tunseth, the former editor of the Alaska Star newspaper, photographed a similar black Hummer SUV with the personalized plate reading “3REICH” idling in traffic near downtown Anchorage Friday evening. The “Third Reich” was the Nazi designation for its regime.

Tunseth posted the image on Twitter, where it quickly began to circulate. Elected officials quickly took note, with Juneau state Rep. Sara Hannan saying she’d asked the DMV to revoke the plate. Allard weighed in via Facebook comment that “Fuhrer” might simply mean “leader” in German.

“The progressives have put their own spin on it and created their own definition,” she wrote.

The comments led another Assembly member, Meg Zaletel, to post that she was “disappointed” in what she called Allard’s defense of the words.

“These words have a history of hurting, attacking and killing people,” Zaletel wrote. “Etymology doesn’t change the racist and dangerous history in which the words Fuhrer and 3rd Reich came into popular English usage.”

Rabbi Abram Goodstein of Congregation Beth Sholom wrote in an open letter to Allard that he’d read her social media remarks and asked the official to “be more considerate of our community which includes many members who have had parents, grandparents, and great grandparents perish in the Holocaust.”

“These deaths still haunt every Jewish community around the world,” he wrote.

“As the Rabbi of the biggest and oldest Jewish community in Alaska, I have seen firsthand where hateful speech can lead,” he wrote. “While much of this speech is protected under the first amendment I feel it is important that our leaders, and those of us who are privileged with a wide audience, work hard to ensure that speech is not used to repress or harm others.”

Allard had not responded to questions as of early Tuesday afternoon.

On Monday, the Department of Administration Commissioner Kelly Tshibaka, who oversees the DMV, wrote that the department had heard from “several Alaskans” who were “concerned about messages conveyed on Alaska personalized vehicle registration plates.”

“The plates in question had previously been recalled by the DMV, and the DMV issued replacement standard plates to be displayed,” Tshibaka wrote. “We are notifying law enforcement that these plates are unauthorized by the DMV.”

Tshibaka wrote that she was “ordering a review of DMV guidelines and processes to determine how these plates were issued and to ensure that Alaska’s personalized plate program continues to protect the public’s interest – both in terms of preventing inappropriate messages, and also the state’s obligation to protect Alaskans’ constitutional rights to free speech.”

The DMV offered that the “3REICH” plate was “deemed invalid” in early January, and a “standard plate was issued and sent to the owner along with a notice.” Displaying an invalid plate is illegal, and could result in a citation, said department spokeswoman Kelly Hanke. The DMV did not say when the “FUHRER” plate was revoked, but it appears on a current list of rejected plates.

It appears that the plates may have been in circulation for over a decade: A 2009 traffic citation links the “FUHRER” plate to a Palmer man who did not respond to attempts to contact him for this story. It is not clear whether the “3REICH” plate was issued to the same person, though the vehicles the plates have been displayed on are similar. The DMV did not answer a question about when the plate was issued — and how it won approval to begin with.

“The DMV management will be conducting a full review of the program in question and a report is to be completed next Friday,” Hanke said.

Gardner has those questions too.

“This person is so committed to this anti-Semitic message they are driving around risking a ticket?” she said.