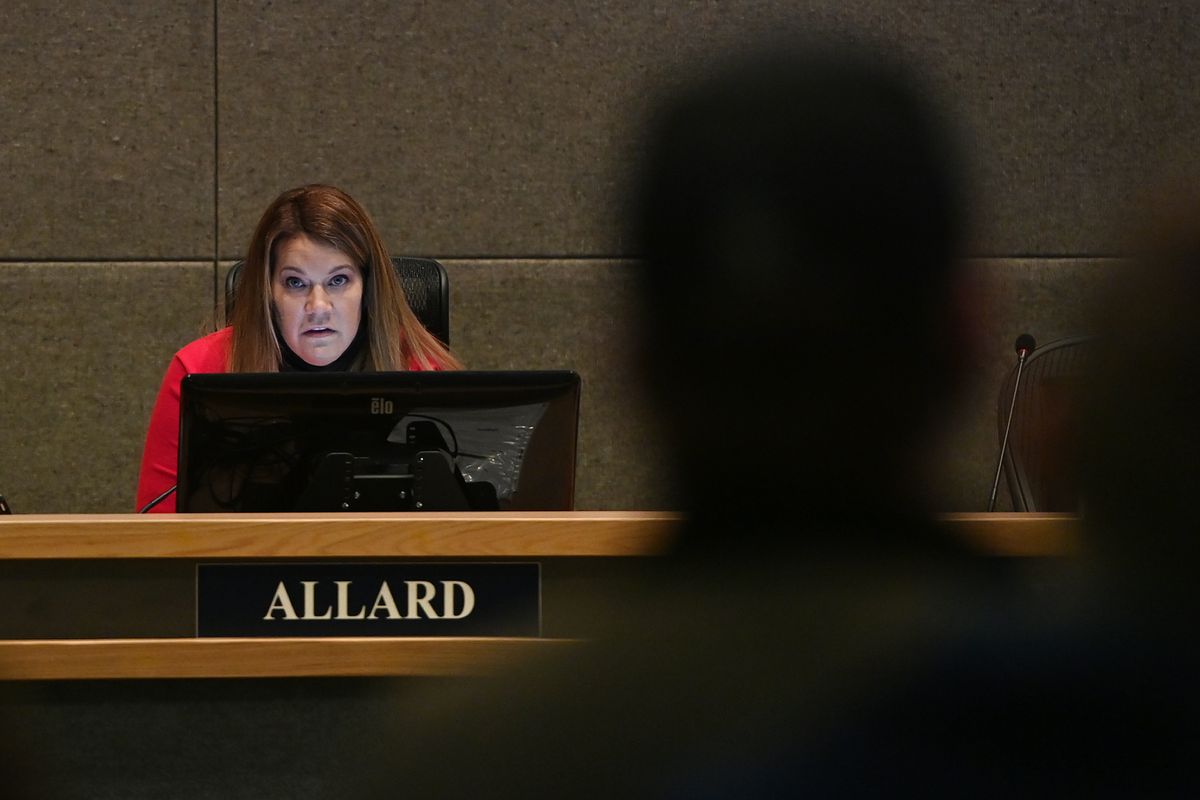 Gov. Mike Dunleavy removed Anchorage Assembly member Jamie Allard from the Alaska Commission on Human Rights over comments she made on social media regarding a pair of Nazi-themed vanity license plates that surfaced in Anchorage recently.

“The comments made by Ms. Allard regarding the license plate controversy have become a distraction for the Human Rights Commission and its mission to ensure equality and fair treatment of all Alaskans,” Dunleavy spokesman Jeff Turner said Tuesday. “Gov. Dunleavy felt it was in the best interest of the board to remove her effective immediately.”

The issue took center stage at a noisy Tuesday night Assembly meeting, with some citizens criticizing her remarks and others defending her. Allard, who said her comments had been misinterpreted, condemned racism and said she apologized “if this came across offensive”

The controversy began when photos of a Hummer SUV bearing state-issued Alaska license plates reading “FUHRER” and “3REICH” circulated on Twitter over the weekend, spurring condemnation among many commentators.

“The progressives have put their own spin on it and created their own definition,” she wrote.

The comments led another Assembly member, Meg Zaletel, to post that she was “disappointed” in what she called Allard’s defense of the words.

“These words have a history of hurting, attacking and killing people,” Zaletel wrote. “Etymology doesn’t change the racist and dangerous history in which the words Fuhrer and 3rd Reich came into popular English usage.”

Allard did not immediately respond to attempts to contact her for this story.

The controversy spilled into first hours of Tuesday night’s Assembly meeting, as some in the audience voiced support for Allard, while others denounced her and the city’s acting mayor addressed the issue.

Acting Mayor Austin-Quinn Davidson condemned the Nazi ideology as she spoke during the beginning of the meeting.

“There are a few who continue to try to divide us with dangerous and uncaring ideologies,” Quinn-Davidson said, and an outcry of boos and disapproval from a group of attendees in the chambers interrupted her speech.

Quinn-Davidson then said there is an “obligation to speak out forcefully against Nazi-ism, white supremacy or any other ideology that directs hate rather than caring towards members of our community.

Soon after, Allard asked for time to speak.

“Some local bloggers and Assembly members are claiming that I’m supporting white supremacy because of recent comments I’ve made questioning words not allowed on license plates,” Allard said. “Let me state this plainly, unequivocally — I condemn racism and white supremacy in all forms.”

Allard said that some have misinterpreted her recent comments as defending the license plate.

“That was never my intention. Nor have I done so,” Allard said. ‘In fact, I find the plate in question in poor taste.”

“....Anyway, my apologies if this came across offensive,” Allard said.

One person who spoke to the Assembly thanked Allard for her “continued fight for freedom and exceptional strength in constantly battling the attempt to take our freedoms,” he said.

But others who called in to testify expressed dismay and outrage over Allard’s comments.

During that testimony, the clock which limits testimonies to 3 minutes had not been started because Rivera had left the chambers, and Assembly Vice-Chair John Weddleton was presiding over testimony. As the caller spoke, the crowd burst out in protest over the testimony not being timed, though Weddleton clarified that he was timing it with his own clock.

Allard spoke directly to the crowd, asking them to be respectful.

“When someone’s testifying, let them finish what they have to say,” Allard said. “... If I’m up here, strong enough to listen to what they’re saying about me, you need to have my back.”

One man in the audience was eventually ejected from the chambers during public testimony.