Alaska’s busy COVID-19 hotline was voicemail only — and maxed out. Now a person answers each call. 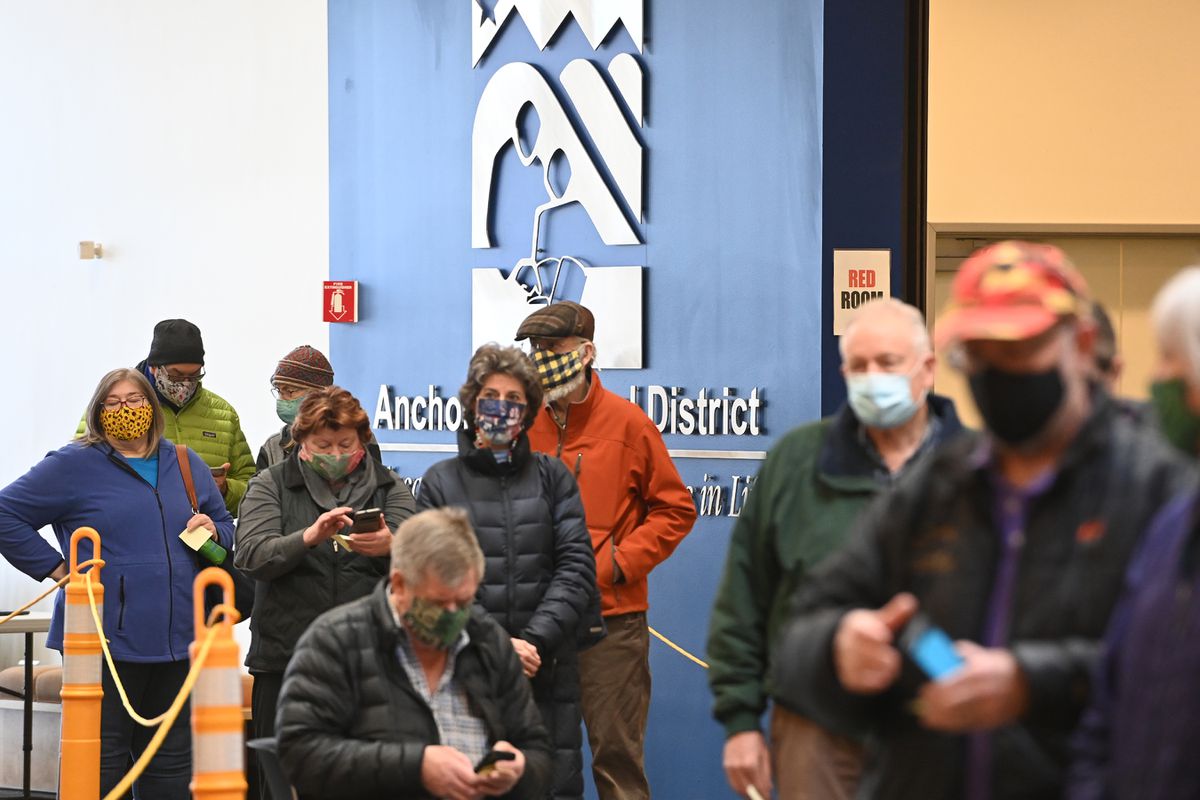 People wait in line during at a public COVID-19 vaccination site in the Anchorage School District Education Center on Jan. 7. The statewide vaccine rollout for Alaskans 65 and older put additional stress on Alaska's COVID-19 hotline (907-646-3322), and now the state has boosted staffing so people can connect with someone on the other end of the line instead of having to leave a message. (Bill Roth / ADN)

People wait in line during at a public COVID-19 vaccination site in the Anchorage School District Education Center on Jan. 7. The statewide vaccine rollout for Alaskans 65 and older put additional stress on Alaska's COVID-19 hotline (907-646-3322), and now the state has boosted staffing so people can connect with someone on the other end of the line instead of having to leave a message. (Bill Roth / ADN)

Carla Helfferich, an Alaskan since statehood, exhausted her ample supply of profanity when she tried to call the state’s COVID-19 hotline during the rocky senior vaccine rollout earlier this month.

Helfferich, a Fairbanks resident over 65, was eligible to schedule an appointment. But she didn’t know where to start. So she called the state hotline. Over and over.

Helfferich did get an appointment, but only after hearing a rumor about availability. She never got through on the state number.

“I found the situation stunningly bizarre,” she said.

It comes too late for Helfferich and thousands of seniors who maxed out the hotline earlier this month. But as of this week, people with COVID-19 questions now get to talk to a person. The Alaska Department of Health and Social Services announced the change this week: Callers will either get immediately connected with someone or be put on hold until someone is available.

That marks a significant departure from the way the state has handled the hotline since July through an emergency contract with the Alaska Travel Industry Association, the nonprofit that manages the Travel Alaska statewide destination marketing program.

The association received a nearly $300,000 contract to answer emails and voicemails first asking questions about COVID-19 travel-related issues, and then the vaccine, starting in December.

Four people answered questions that surged into the thousands this month, effectively delaying responses to the point that they took days.

Starting Tuesday, the state shifted about 50 people from the state’s contact tracing workforce to take calls personally, according to Tessa Walker Linderman, state co-lead on Alaska’s vaccine task force, and someone involved in the hotline contract since the beginning.

About 35 people are staffing the virtual call center at any given time, a shift prompted by the sheer volume of vaccination calls coming in.

“Obviously now that we have ramped up to a totally new level, it’s completely overwhelmed their capacity,” Walker Linderman said. “What ATIA was doing with three or four people, we now have 50 people doing.”

The hotline — 907-646-3322 — is the main number provided by the state for people with questions about Alaska’s COVID-19 situation. It’s especially vital for people without computers, internet or digital know-how who can’t make appointments via the state’s vaccine website, at covidvax.alaska.gov.

For months, Alaskans with sometimes urgent questions about COVID-19 travel restrictions and later vaccine availability left voicemails with the understanding they’d get called back within a day or maybe two. Between July and mid-January, the association responded to more than 12,000 telephone calls and 10,000 emails, according to Sarah Leonard, ATIA president and CEO.

The travel industry group fielded more than 1,400 calls and emails in the first half of January alone. It didn’t go smoothly for some.

One Anchorage resident said he hung up when what sounded like a recording from a travel agency picked up on the other end. A Daily News reporter called the line in mid-January with a travel-related COVID-19 question. The return call came four days later — too late to provide a timely answer.

“That’s when we really started bringing in contact tracers,” Walker Linderman said, something only made possible by Alaska’s dropping daily COVID-19 case counts.

A backlog of 3,000 calls wasn’t cleared until last week.

The hotline contract is one of numerous agreements between the Alaska Department of Health and Social Services and outside parties to help with communications during the pandemic. The department is paying more than $4 million for help with public outreach on COVID-19.

It’s not unusual for agencies around the country to contract out public health messaging, especially during a health crisis with limited numbers of state staffers working long hours for nearly a year now.

The state awarded a $2.2 million contract to “create messaging around the prevention of the spread of COVID-19″ to Brilliant Media Strategies in September, according to a copy of the contract obtained through a records request. Six other firms submitted bids.

Three other contracts, including the one with ATIA, were awarded under emergency protocols that waived requirements to get multiple bids before a final decision is made.

Last March, the state’s chief procurement officer authorized a request that allowed the Department of Health and Social Services “to take necessary steps to respond to the immediate threat to public health, welfare, and safety posed by COVID-19,” procurement manager Jason Grove wrote in an email.

That allowed the agency to contract directly with Blueprint Alaska and Northwest Strategies “for immediate assistance in communicating to the public about COVID-19.”

The Blueprint contract is worth up to $1 million and runs through April, according to the document. The Northwest Strategies contract was for $735,000.

That’s when the state launched new travel testing requirements to contain the spread of the virus from people arriving from the Lower 48 or other countries. People had lots of questions.

“It made sense because they were travel-related,” Walker Linderman said this week.

The travel industry association says their selection also made sense because of the economic hit the industry has taken during the pandemic.

“At a time when so many businesses are suffering from Alaska’s devastating loss of visitors, proactively supporting the state’s communication efforts to promote safe travel practices to prospective travelers was a logical step,” Leonard wrote in an email, adding her team “was also positioned to outreach to industry, keeping businesses informed about changes to health and travel mandates.”

‘We’re already working with them’

The ATIA contract started in June with an up to $80,000 award to answer emails and calls, including to the state 211 information line, about COVID-19 travel mandates, according to a copy of the contract obtained through a records request.

Weekly averages stayed above 700 calls and emails a week after peaking at more than 1,000 calls and 600 emails in early August, according to Leonard. Questions included what kind of COVID-19 test was accepted by the state, where to get tested before or after getting to Alaska, quarantine information or how to navigate the state’s online traveler portal.

The contract was amended again just before vaccine arrived in mid-December. Another $162,500 was added for a total contract award of $294,500.

The amendment added the duty of supporting the state’s vaccine task force by sending people with questions to online and other resources plus directing medical questions to health-care providers.

Walker Linderman says she instructed hotline staffers to not answer anything they didn’t know but instead to direct the public to the state health department’s website.

The state did look into other options like using pharmacy students or doctors to answer questions, she said. But ultimately, Walker Linderman said, she made the decision to continue to staff the hotline with ATIA.

“We’re already working with them, we have a contract in place,” she said.

It’s likely to get extended again through the summer, she said, “especially with all the travel questions.”