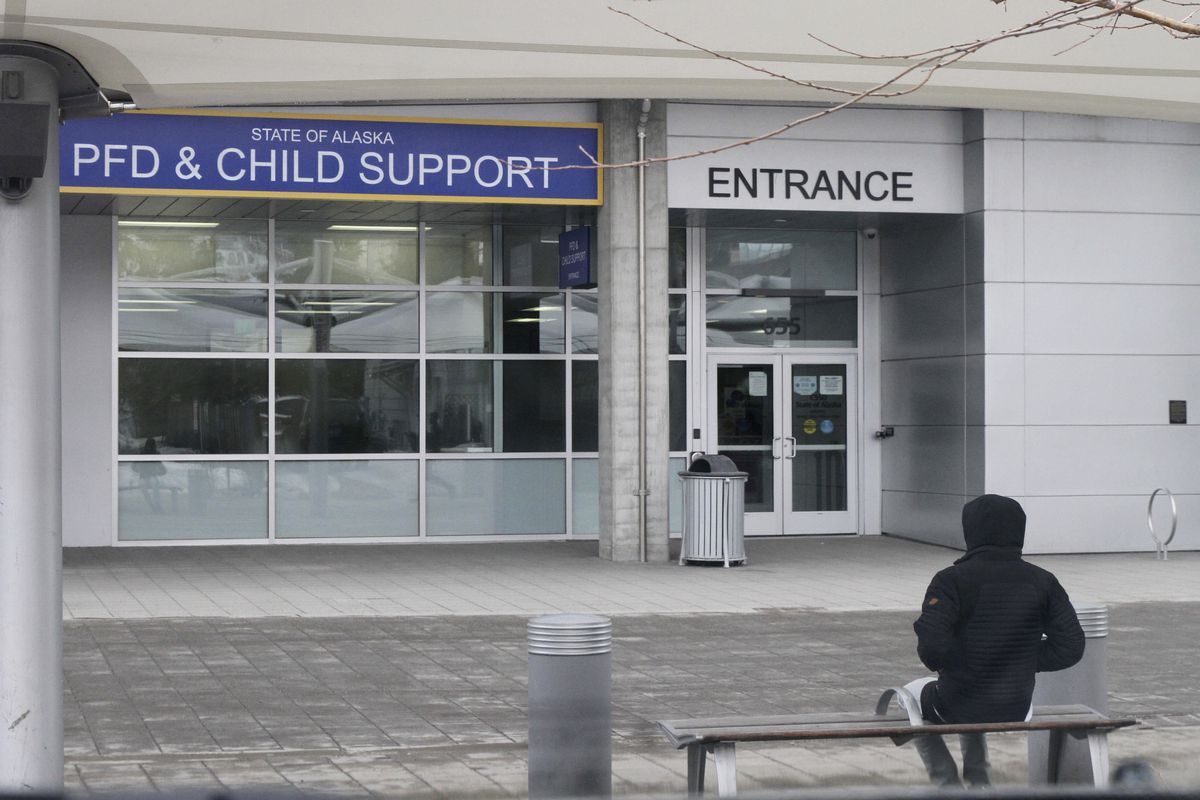 A man sits on a bench across the street from the Alaska Permanent Fund Dividend office in downtown Anchorage on Wednesday, April 14, 2021. (AP Photo/Mark Thiessen)

A man sits on a bench across the street from the Alaska Permanent Fund Dividend office in downtown Anchorage on Wednesday, April 14, 2021. (AP Photo/Mark Thiessen)

Alaska wrongly denied some same-sex spouses Permanent Fund dividends for years by claiming their unions were not recognized even after courts struck down gay marriage bans, court documents obtained by The Associated Press show.

The agency that determines eligibility for the PFD, which is paid to nearly all Alaska residents, denied a payout for same-sex spouses or dependents of military members stationed in other states for five years after a federal court invalidated Alaska’s ban on same-sex marriage in 2014, the documents show. The practice also persisted after the Supreme Court legalized the unions nationwide in 2015.

In one email from July 2019, a same-sex spouse living out of state with his military husband was denied a check because “unfortunately the state of Alaska doesn’t recognize same sex marriage yet,” employee Marissa Requa wrote to a colleague, ending the sentence with a frowning face emoji.

The practice by the Permanent Fund Dividend Division continued until several people questioned or appealed being denied checks in 2019. Denali Smith, who was denied benefits, sued the state that November, seeking an order declaring that Alaska officials violated the federal court ruling and Smith’s constitutional rights to equal protection and due process.

Smith and the state settled the lawsuit Wednesday. Alaska admitted denying benefits to same-sex military spouses and dependents for five years in violation of a permanent injunction put in place by the 2014 U.S. District Court decision. The state also vowed to no longer use the outdated state law, stop denying military spouses and dependents oil checks going forward and update enforcement regulations.

There were no financial terms to the settlement. In fact, Smith had to pay $400 out of pocket to file the lawsuit to get her PFD, and her attorney worked pro bono.

In Alaska, the dividend is seen as an entitlement that people use to buy things like new TVs or snowmachines, fund college savings accounts or, in rural areas, pay for high heating and food costs. The payouts come from a fund seeded with oil money. Last year, nearly every resident received $992. The year before, the amount was $1,606.

About 800 pages of emails provided by the state for the lawsuit show a clear misunderstanding or outright disregard of the 2014 court precedent and reluctance to reach out to the attorney general’s office for guidance.

The emails, redacted of identifying information about oil check applicants, show that as late as 2019, division employees were claiming Alaska did not recognize same-sex marriages, often pointing to an outdated and unenforceable section of state law still on the books as justification.

“It seems like none of them, all the way up to the director, understood that this was a permanent injunction, meaning if you enforce the law after this date, you’re in violation of a court order and you’re violating people’s rights,” said Anchorage attorney Caitlin Shortell, one of the lawyers who successfully sued to overturn the state’s ban on gay marriage and later filed the lawsuit on behalf of Smith.

The state Department of Law released a statement saying the unenforceable law will remain part of the state’s statutes until lawmakers remove it.

“As for the application of that law which led to the recently settled lawsuit, that policy has been corrected by the Department of Revenue,” the statement said. It added that it’s ensuring every eligible Alaskan receives an oil check as the governor directed after hearing about the issue in 2019.

The department did not respond to other questions from the AP, including how many spouses were improperly denied checks and how many of those were retroactively paid, whether the attorney general’s office advised the Permanent Fund Dividend Division on the changes stemming from the court decisions or if the division decided for itself what the law meant.

The emails show employees disregarded a 2017 order from a deputy revenue commissioner to stop denying checks to same-sex spouses, that efforts were made to keep incorrect language about the state not recognizing gay marriage in its literature and that its computer system was programmed to reference the unenforceable state law in form denial letters.

Smith, who accompanied her wife out of state, was denied a check in 2019. Shortell also represented another woman whose wife was stationed out of state, and the woman and the couple’s two children were denied benefits.

Division staff listed about 40 people who were denied. Four were marked for further review, but the emails don’t reference what came of those applications.

“Based on their ignorance of and disregard for the law throughout the disclosures, I do not trust their analysis was correct,” Shortell said, adding that the number of people denied benefits could be higher.

Of the settlement, Shortell said she was pleased the state would follow court orders that same-sex couples “are entitled to have their marriages recognized and to receive all of the benefits attendant on marriage,” including the oil checks.

“It is disturbing that it took five years and a federal lawsuit to force the state to follow the law and stop its discriminatory policy,” she added.

According to the emails, the first indication that the law was not being followed came on Feb. 26, 2015, when someone emailed employee Bradley Johnson about whether gay marriage was legal, and he sought clarification from Kimberly Lane, the division’s eligibility manager.

That same day, another employee, Jennifer Cason, told Lane she knew that same-sex marriage was legal in Alaska. “I just want to make sure that everyone knows what the law is here so it can be followed,” an email said.

“I don’t think the law has been officially struck down, as yet, but I could be wrong,” he continued. “So, 2nd thought, let’s wait until the Supreme Court decision and then we won’t have to take anything back that we’ve already done.”

Lynne Church, another employee, emailed Lane and Pearson on Aug. 8, 2016, about an applicant who would most likely be denied the following year because they would be accompanying their military spouse out of state. “Federal law and Alaska law are not aligned at this time,” Church wrongly stated.

On Jan. 26, 2017, Pearson emailed Sara Race, then the division’s director, and Anne Weske, then the division’s operations manager, summarizing the appeal by a woman who was denied a check when her wife was stationed out of state. The 2016 denial, Pearson wrote, “is based solely on her not qualifying as a military spouse. If she were male she would be eligible.”

The most definitive directive about approving such claims for same-sex spouses and dependents was given March 9, 2017, by Jerry Burnett, then the deputy revenue commissioner. He left little doubt in an email to Race and Weske, saying the U.S. Supreme Court decision invalidated all opposing laws at the state or local level. Since the ruling, the division “has not been able to use the definition of marriage found in the Alaska Statutes or Constitution,” he wrote.

Any oil checks denied for that reason must be paid immediately, and staff need to use a definition of marriage that doesn’t conflict with the legal decisions, he wrote.

Race responded that the denial had been overturned and the person paid. “Also, 110% understood that future eligibility decisions would need to follow suit.”

Two years later, emails show same-sex couples were still being denied. In April 2019, emails show a woman who was denied a dividend was given a supervisor’s contact information to appeal.

After another applicant who had been denied complained to their lawmaker, the issue was escalated to Weske, who by then was the division’s director and who had received Burnett’s 2017 directive to recognize same-sex marriages.

“I seem to recall possible guidance from the prior administration in stating that we COULD allow them,” Weske wrote Sept. 23, 2019, noting that she’d check, but “if they were denied there is law stating that we don’t recognize same sex marriage.”

By Oct. 7, 2019, over a month before Smith’s lawsuit was filed, the policy had changed. Lane emailed staff to treat same-sex marriages the same as opposite-sex couples.

In that email, Lane said Alaska’s definition of marriage “has been struck down as unconstitutional by U.S. District Court and U.S. Supreme Court in two separate cases,” without mentioning those cases had been decided several years earlier.