Tires slashed on dozens of planes parked at Merrill Field 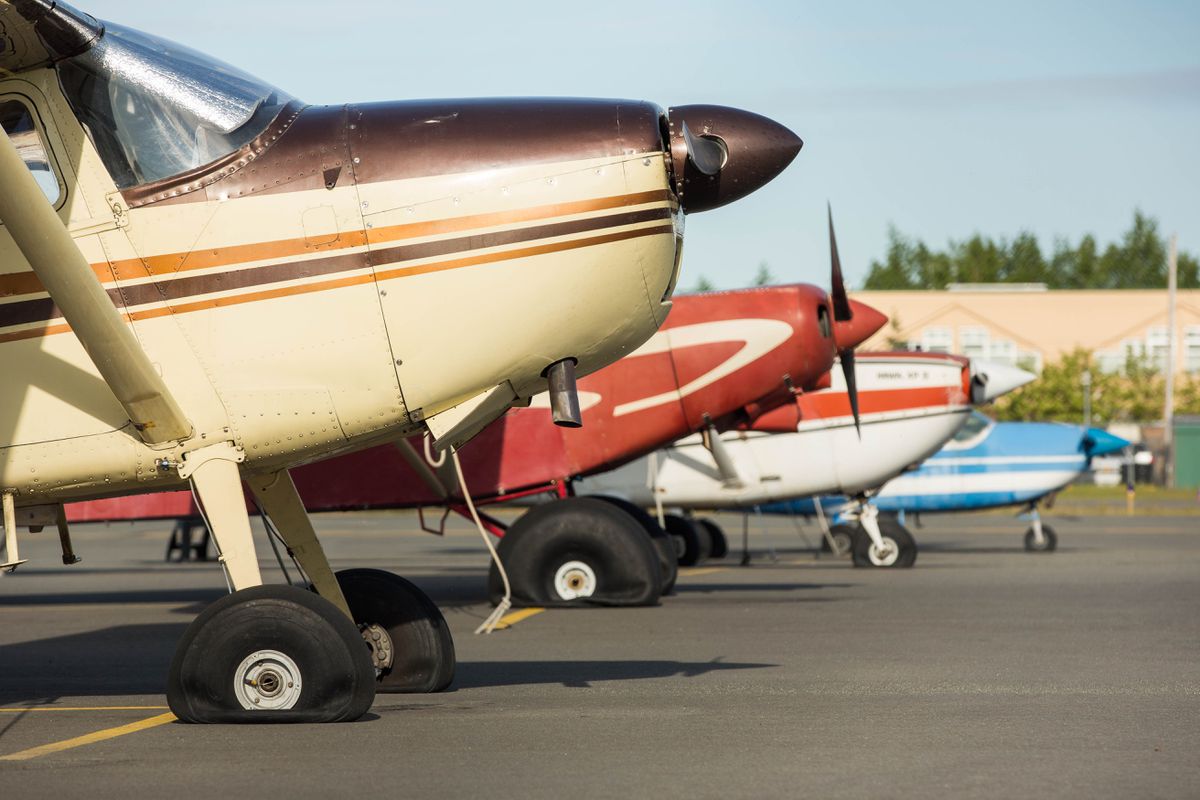 A row of airplanes sit with flat tires at Merrill Field on Thursday morning. Scores of planes had tires slashed overnight at the airport. (Loren Holmes / Alaska Dispatch News)

A row of airplanes sit with flat tires at Merrill Field on Thursday morning. Scores of planes had tires slashed overnight at the airport. (Loren Holmes / Alaska Dispatch News)

On Thursday morning, pilots found tires slashed and flattened on dozens of airplanes at the Merrill Field airport in East Anchorage. The tires of at least 87 planes parked there were cut and the airport doesn't know yet who might be responsible.

Chris Seaman, who lives in Anchorage, arrived around 6:45 a.m. to fly and got a shock.

"Driving into the parking area, we were like, 'Wow, there's a lot of flat tires out here,'" he said, "and realized, 'Holy s—, all the tires were slashed.'" That included his.

Paul Bowers, manager of the city owned and operated airport, said security footage is still under review. He said the slashing probably happened between 1:30 a.m. and 5 a.m.

"As you might suspect, nobody is happy," Bowers said. There are more than 800 planes parked there. "We have probably more security cameras on this field than any other general aviation airport in Alaska, but it's not a perfect system."

Merrill Field is in the middle of a $5 million security upgrade for things like gates and a camera system funded primarily through federal grants. Bowers said the tower is not staffed throughout the night. He also said "there are random security checks" at Merrill Field, some of which are done by the Anchorage Police Department. He would not say whether the airport also has private security and added the airfield looks to other airport users to help keep a lookout.

"It's a classic TSA axiom: If you see something, say something," Bowers said, referring to the Transportation Security Administration.

"We are waiting for all of the victims to file a report so we can get a total figure of the amount of planes damaged," Castro said.

Replacements will be costly. Bowers said the damage might be around $200,000.

"I've never seen anything like this before. I've been in business 32 years here," Merrill said. He has about 25 customers at Merrill Field and said about half a dozen had their tires flattened.

At least one company is already reaching out to help ease the pain of replacing so many pricey tires.

Airframes Alaska in Chugiak is offering a 20 percent discount on tires to people who can show theirs were slashed, said COO Heather Montgomery.

As a result, it's been a hectic day for the business.

"We have gotten a ton of calls from people. … It's insane. We have completely redone our whole production schedule," Montgomery said.

By 11:30 a.m., Airframes was sold out of two tire sizes and was planning to start a waitlist for people who still need tires. On a typical summer day, the company sells about five sets of tires, and by midday Thursday it had already sold 40 sets.

Michael Schoder keeps a plane in a hangar at Merrill Field, so it wasn't harmed. But he was still floored Thursday morning by the damage to others' planes.

"That's a lot of work, just to walk up to every plane out there," he said. "They were pretty bold."

Also on Thursday morning, just before 10 a.m., a plane ran off the runway at Merrill Field, said Anchorage Fire Marshal Cleo Hill. She said there were no injuries, and fire department crews were at the scene for only seven minutes.

Hill didn't know if the incident was linked to the tire slashing, but a firefighter on the scene said it was unrelated.

Police said later Thursday evening that it's possible the suspect or suspects entered Merrill Field on foot from its south side. The police department is asking businesses along East 15th Avenue and DeBarr Road near the airport to check their surveillance video for people walking around the time the vandalism is believed to have happened.