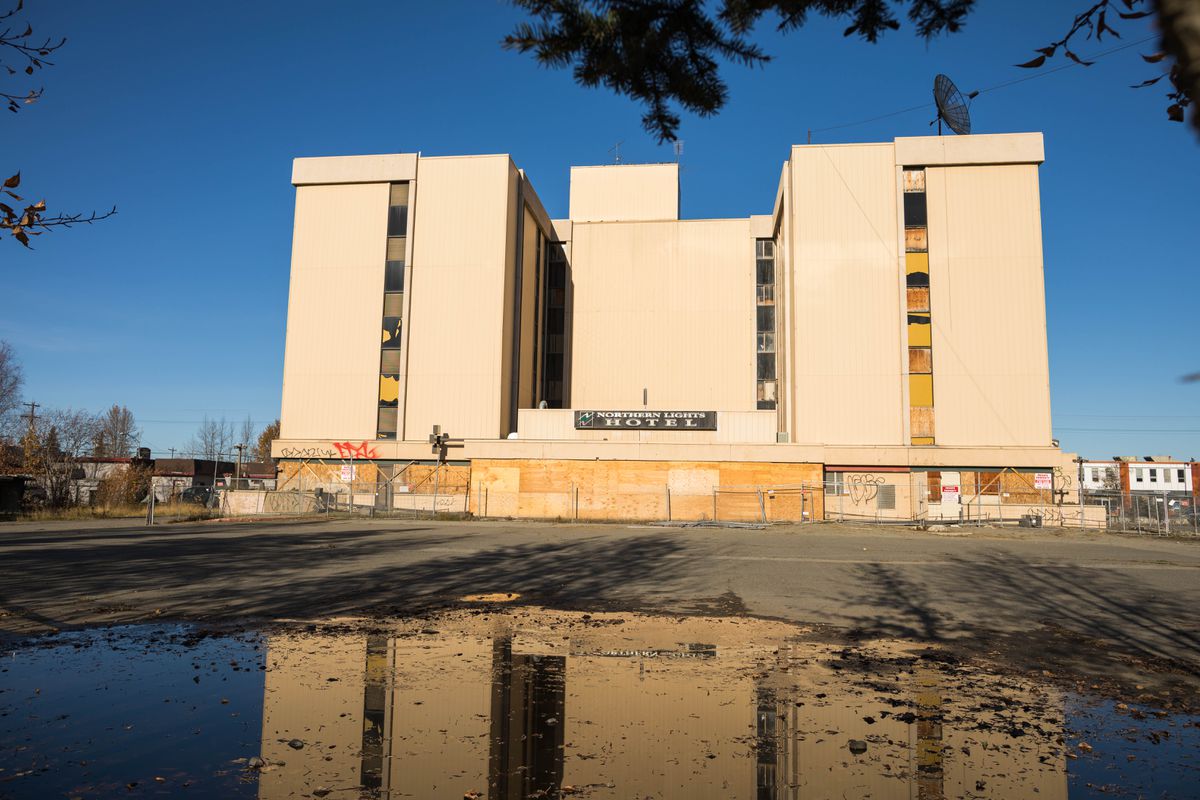 The former Northern Lights Inn, photographed on Thursday, Oct. 13, 2016. The building, which has been boarded up for years, is one of Anchorage’s worst eyesores. (Loren Holmes / Alaska Dispatch News)

The former Northern Lights Inn, photographed on Thursday, Oct. 13, 2016. The building, which has been boarded up for years, is one of Anchorage’s worst eyesores. (Loren Holmes / Alaska Dispatch News)

Anchorage officials have agreed to suspend fines and fix-up demands for the derelict Northern Lights Inn in exchange for the owners' promise to tear down the building over the next few months.

"They are taking constructive steps," Falsey said in an interview.

Terence Chang, a representative of Emerald Investments, said in an emailed statement that the company was "always committed" to demolishing the old hotel.

"We are moving forward now with plans to demolish the building, and we expect that to be completed by May 15 of next year, barring weather delays," Chang wrote.

He said the Anchorage Fire Department received and accepted a preliminary demolition plan for the hotel earlier this month.

The cream-colored, boarded-up hotel at 598 W. Northern Lights Blvd. in Midtown shut down in 2002 and is in a state of decay. Mayor Ethan Berkowitz has called it a "blight on that part of Anchorage." This fall, his administration made the building and Emerald Investments the target of a crackdown.

In September, city investigators obtained a search warrant, the first of its kind in recent memory, to investigate complaints about squatters and trespassers at the hotel. The investigators found evidence that people were living there and cooking food.

The city issued violation notices and ordered the owners to repair the water, heat and fire alarm systems by Nov. 10.

On Thursday, Falsey said those demands were suspended last month in exchange for a commitment from the owners to raze the building.

Emerald Investments — one of a number of companies owned by Chang's family, which also owns the 4th Avenue Theatre downtown — agreed to apply for the necessary demolition permits by Nov. 4, Falsey said. The company also agreed to begin the demolition 30 days after the permits were approved, Falsey wrote.

A contractor, Alaska Demolition, has been hired to do the work, according to permit records. Falsey said the demolition is now expected to start Dec. 5.

If it doesn't go according to plan, Falsey wrote, the enforcement orders and fines will be reinstated.

He said, however, that Emerald Investments appears to be making good progress.

"They seem very serious about doing this work," Falsey said.