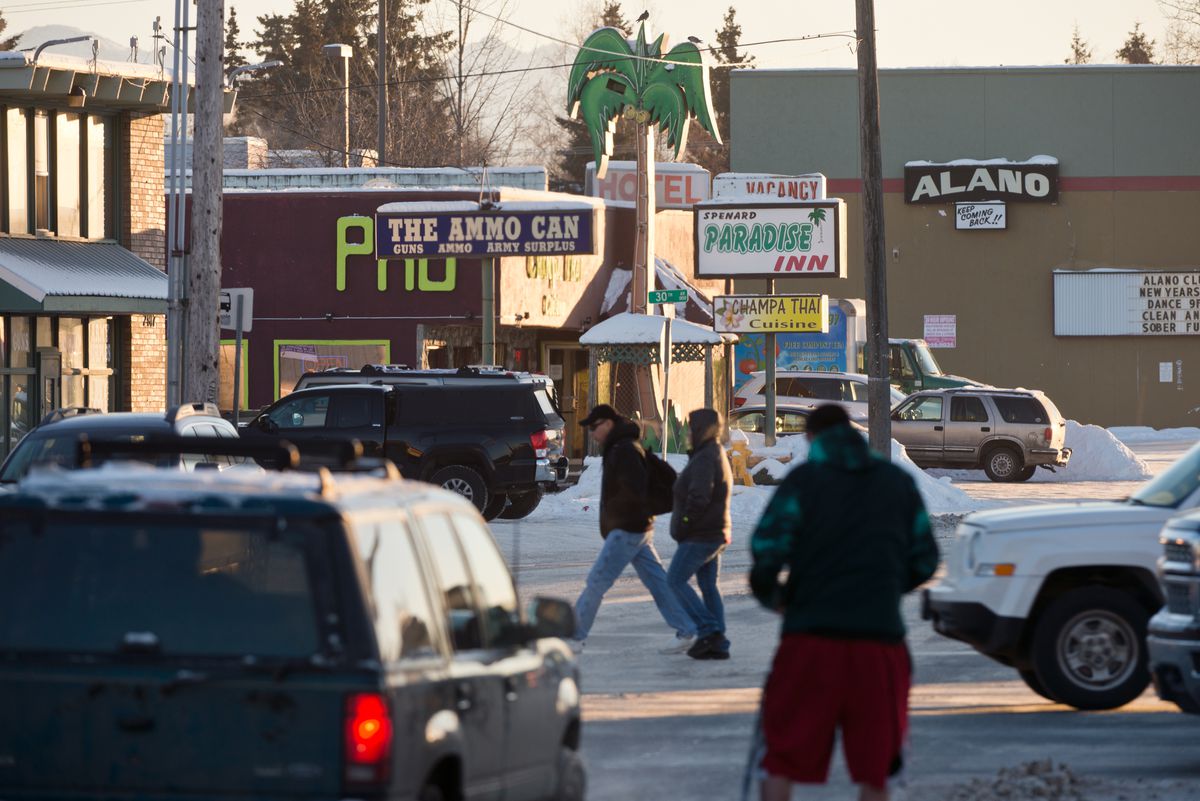 Vehicle and foot traffic passes the intersection of Spenard Road at Benson Boulevard. Anchorage officials are seeking land along Spenard Road to convert it from four traffic lanes to three, with bike lanes, sidewalks and landscaping. Some property owners refuse to settle with the city for portions of property along the road that would be affected by the plans. (Marc Lester / Alaska Dispatch News)

Vehicle and foot traffic passes the intersection of Spenard Road at Benson Boulevard. Anchorage officials are seeking land along Spenard Road to convert it from four traffic lanes to three, with bike lanes, sidewalks and landscaping. Some property owners refuse to settle with the city for portions of property along the road that would be affected by the plans. (Marc Lester / Alaska Dispatch News)

The city of Anchorage appears headed to court with several Spenard property owners over the city's effort to rebuild the north end of Spenard Road.

City officials have spent months negotiating with property owners for the land to convert Spenard Road between Hillcrest Drive and 30th Avenue from four lanes to three, with sidewalks, bike lanes and landscaping.

But some property owners refuse to settle. They say they're not being fairly compensated by the city. Now the city may take them to court to force the issue.

The city is asking the Anchorage Assembly to authorize the use of eminent domain, or the taking of private property for a public use, against the remaining properties to meet a spring construction start date.

Voters approved $13.8 million in bond funding for the road project in April 2016. Plans for rebuilding Spenard Road began more than a decade ago, with studies reporting safety problems and deterioration. After hitting opposition in 2009, the project went dormant until last year, when it got new life under the administration of Mayor Ethan Berkowitz.

The city hired professional appraisers to determine how much would be offered in compensation for private property loss. Many businesses are losing between 2 and 8 feet of space up to front entrances. No structures are slated to be demolished, with the exception of a state-owned building at the corner of Spenard Road and West Benson Boulevard.

To date, the city has reached agreements with about 43 property owners, or three-quarters of those affected by the project, said city surveyor Steven Schmitt.

While negotiations aren't over, the city and about eight property owners are at a "standstill," Schmitt said.

One of them, Lottie Michael, owns a commercial building at 2601 Spenard Road that is occupied by several businesses, including a cake shop and a clothing boutique. She has been outspoken in the past about the road's upgrades, has not settled with the city and is preparing to go to court.

She said she's owed "substantially" more than what the city is offering and said that doesn't include losses her tenants may suffer.

Michael said none of her tenants are signing extensions on their leases because of uncertainty about the project. While her building has parking in the back, she said there aren't back entrances and it will be tougher for her tenants to attract customers.

At an Anchorage Assembly work session on Thursday, Baxter Gamble — who owns three parcels in Spenard, including a print shop — made no secret of his opposition to the project. He disputed the city's claims that the project will make the road safer and said the design will give Spenard Road too much of a "Santa Barbara feel."

One of the property owners who has reached an agreement with the city is Assemblyman John Weddleton, who owns Bosco's Comics at 2301 Spenard Road. He said he'll lose some parking but thinks the settlement is fair.

"I think there's a huge amount of support (for the project), even from people who have trouble with it," Weddleton said. "But there are significant problems when you lose parking."

In a move to address the issue, the city has proposed building a "parking condominium" in the construction area. Robin Ward, the city real estate director, came up with the idea, which would be new for Anchorage: Four nearby business owners would own an interest in the parking lot and would share reserved spaces.

The city would set up the lot's ownership as a corporation. Ward said the city has been discussing the idea with four property owners who are losing more parking than their zoning use allows. She said all but Gamble have expressed interest.

Weddleton, whose business is next door, said he supports the arrangement and is considering buying an interest. But Gamble said Thursday that he was skeptical it could work.

Eminent domain is relatively rare. The city hasn't deployed it since 2009.

At the work session, officials said they would negotiate up to the Assembly vote. Some parcels that were marked in Assembly documents as not having settled were very close or had been settled already, said Schmitt, the surveyor. Assistant city attorney Bob Owens told the Assembly that the city was trying to minimize private loss as much as possible and had in some cases modified offers to address concerns.

The Assembly is scheduled to hold a public hearing on the matter at its Jan. 24 meeting. With his shop directly in the path of the project, Weddleton said he plans to disclose a financial conflict at the hearing.

With Assembly approval, the city expects to file a lawsuit to take the remaining properties. That will require a court ruling that the city is taking the property for a public use, Owens said. Property owners can contest whether they're being adequately compensated.

Lou Perullo, who owns Ammo Can, a gun and ammunition shop at 2917 Spenard Road, told the Assembly on Thursday that the project was "quite rushed." He said he's losing a third of the parking in front of his store and doesn't believe he's being adequately compensated.

If the Assembly votes against authorizing eminent domain, the project would not start in 2017, Abbott said. The city's goal had been to break ground in May.

He said the administration would then have to evaluate whether the project could be redesigned without acquiring the properties whose owners have yet to settle with the city.