A well-trafficked Spenard corner has big changes in store 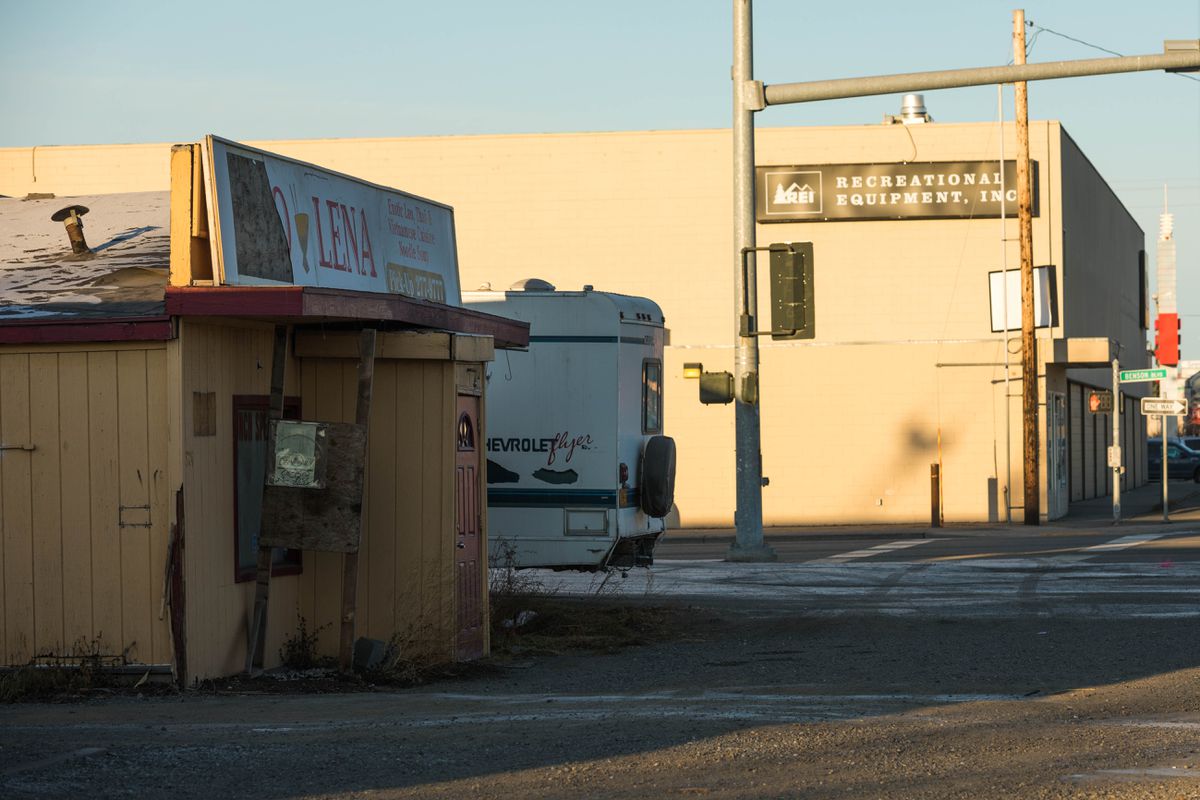 A busy intersection in Anchorage's Spenard neighborhood that will soon be home to a new marijuana shop has more changes on the way.

Two buildings at the southwest corner of West Benson Boulevard and Spenard Road will soon be demolished, if all goes according to plan.

The low-slung buildings at 2904 and 2902 Spenard Rd. — one where Asian restaurant Pho Lena used to be and the other an Alaska Department of Transportation and Public Facilities storage site, respectively — are situated on prime real estate in an area that will soon be affected by a reconstruction project along Spenard.

For the immediate future, parking spots and topsoil will take the place of the demolished buildings.

"I hate to say (the building) wasn't worth saving, but that's pretty much it, financially," said Debbie Hinchey, a co-owner of the building where the restaurant used to be.

She and her family also own the building next door, where ski shop SkiAK used to be before it relocated east along Benson Boulevard, as well the Anchorage Benson DMV building just behind. They also own the land the three buildings sit on.

[Here are the 20 Anchorage marijuana shops closest to opening]

She and her sister, Charlene Brown, both said they don't plan to tear down the SkiAK building, which won't stand in the way of the planned road project. They're hoping to rent that building out again.

The state-owned building next to the old restaurant spot has been used as a DOT record-storage location for years.

"The city has been wanting to get rid of that building for some time, they don't think it does anything for the neighborhood ambiance," said DOT spokeswoman Jill Reese.

John Smith, a project manager with the city's Project Management and Engineering department, said the plan is to get rid of the "eyesore" and then topsoil and seed it temporarily.

"We're trying to get everything together to demo it in the next couple months," he said. He's not sure what might happen to the spot in the long-term.

DOT will hand the building over to the city to tear down, but the state would retain ownership of the land, Reese said. The deal hasn't been finalized yet, she said.

Demolitions at the corner are set to happen in anticipation of the Spenard Road reconstruction project, which will dramatically change the corridor between Hillcrest Drive and 30th Avenue, including converting the road from four lanes to three, and upgrading lighting and sidewalks, among a slew of other improvements.

"It would not be prudent to give up a piece of land located like it is and have someone build a building," Reese said of the DOT site, because "it's very likely that that property will be needed at some point in the road project."

Just across Benson from this cluster of buildings sits Dankorage, a pot shop on the brink of opening.

Smith said changes at the corner wouldn't directly be part of the Spenard Road project, but "sort of an add-on to that project." He's involved with the city's plan to tear down the DOT building but not the plan for the former restaurant.

The changes in the road, which Brown said will get rid of the parking directly in front of the former SkiAK building, are part of the decision to demolish the old Pho Lena joint, along with the fact that it's aged and not worth investing in.

"We might as well time everything together and spruce things up," Brown said. She believes demolition for the former restaurant site will happen in December.

Brown said that when the family bought the buildings on that corner in 2000, they did it to get the land and always thought tearing down at least one of the buildings would be a possibility at some point.

Anne Brooks, public involvement coordinator for the Spenard Road project, said the city hopes to start construction on that project in the spring.