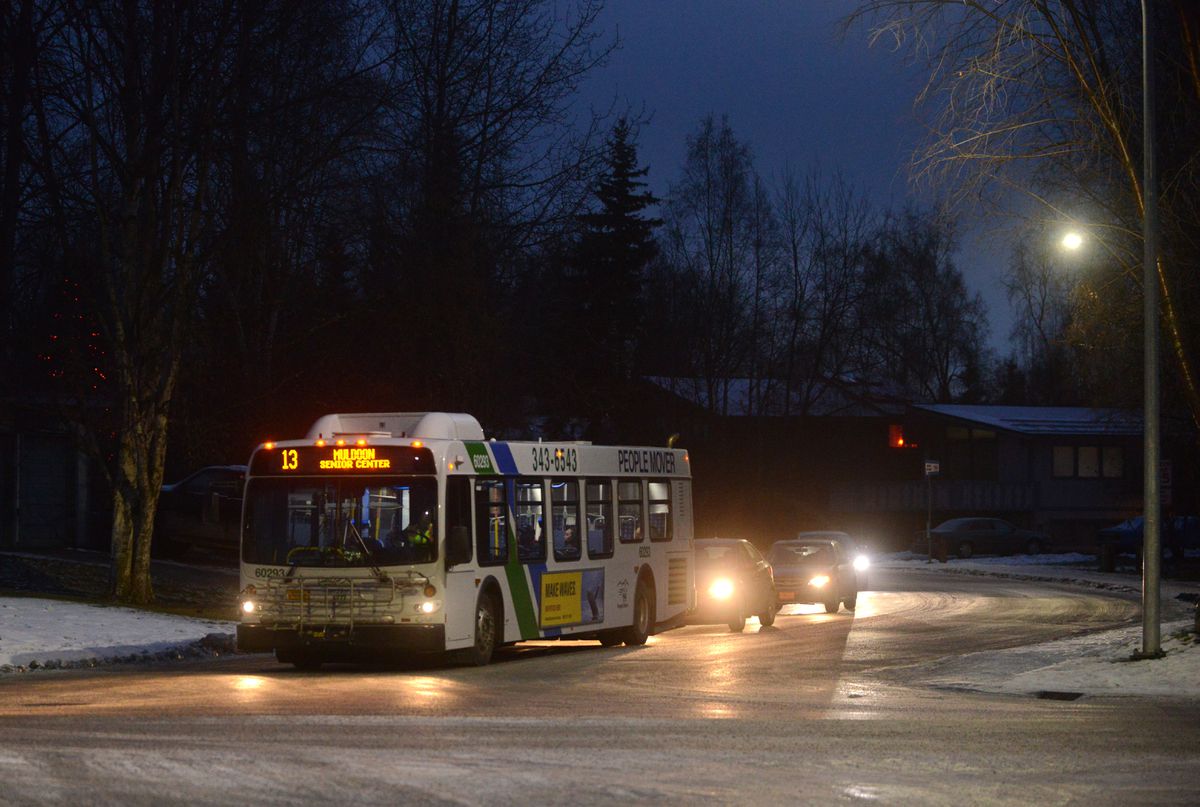 After months of studying Anchorage's bus routes, transit officials say they've decided on a major revamp aimed at making it easier to catch the bus in the city's most populated areas at a cost of fewer neighborhood stops.

Officials published maps of the new system Tuesday morning. At first glance, the maps look like the city has fewer routes and less coverage.

But there's a trade-off. On major roads, buses will be arriving much more frequently. Many routes are transforming into straight shots between two points for a faster trip instead of winding through neighborhood streets.

Some buses will come every 15 minutes compared to an hour now on most runs — though that means fewer stops overall and more walking for riders, which may be difficult in winter.

At a news conference in the People Mover maintenance shop off Elmore Road, Anchorage Mayor Ethan Berkowitz touted the new system. He was joined by transit and union officials and representatives of Alaska Regional Hospital — a major employer — and the nonprofit Cook Inlet Housing Authority.

"It's an exciting time for us to try something new, because the thing that was old wasn't getting the job done," Berkowitz said. "It's not BUS-i-ness as usual."

When no one immediately laughed, Berkowitz added: "It's a pun."

Returning to the business at hand, Berkowitz said that if more money comes in, either from the state or federal government, the city can expand the new network to reach even more people.

In the new system, all of the route numbers will be changing. Four new "frequent routes" — re-numbered 10, 20, 30 and 40 — will run along Northern Lights Boulevard, DeBarr Road and 15th Avenue, as well as through Mountain View and Spenard. On top of that, more buses will run every 30 minutes.

And there's now late-night airport service — Route 40, with frequent service through Spenard, will deliver riders to Ted Stevens Anchorage International Airport between 6 a.m. and 2 a.m. on weekdays. Weekday service on all lines will run from 6 a.m. to midnight. Weekends will also gain service, with buses running between 8 a.m. and 8 p.m. on Saturday and 8 a.m. and 7 p.m. on Sunday.

The expanded hours are in part aimed at accommodating more people with jobs that start or end outside of regular business hours, officials said.

[View the city's interactive map of the new bus routes]

Commuter routes to Eagle River and South Anchorage will preserve some service to the parts of the city with the lowest ridership, using smaller buses to cut back on fuel costs. Smaller buses will also serve "neighborhood routes" in Mountain View, northeast Anchorage and Government Hill-Fairview.

South Anchorage Assemblyman John Weddleton, who owns Bosco's Comics on Spenard Road, spoke after Berkowitz at Tuesday's news conference. Weddleton said he supported keeping some South Anchorage service while making it easier for tourists to travel from one end of Spenard to the other.

[For a comparison, view the current map]

The changes are set to take effect all at once on Oct. 23 — a fast turnaround for a People Mover system eager to get more people on the bus. Amid years of declining ridership and shrinking budgets, transit officials embarked early last year on an effort to reinvent the experience of riding a public bus in Anchorage. There were public meetings and surveys.

But now, a new Eagle River bus, Route 92, will travel between the Eagle River transit center to downtown Anchorage in the morning and evening. Residents of Peters Creek, Chugiak and Birchwood may need to drive to the transit center to catch the bus, but Rudolph said the goal was to avoid cutting service entirely.

Another commuter bus, Route 91, will run between the Dimond Transit Center and the Huffman Business Park and Oceanview Drive on the Old Seward Highway.

Also in response to demand, officials created the new Route 21 in Mountain View, which will ferry residents from neighborhood roads to nearby shopping malls and grocery stores. Some residents said they didn't want to walk through the neighborhood at night.

Only one route is unchanged: The 9, re-numbered as the 35, which runs from the Dimond Transit Center to downtown along Arctic Boulevard.

Transit officials originally promised a final decision on the new bus system at the end of January. Rudolph said the extra months have been spent in part on finding creative ways to accommodate concerns, like retaining service to Eagle River.

Anchorage won't gain or lose bus drivers because of the new plan. But riders may board smaller buses in some areas. Transit officials plan to use 22-foot buses for less-frequent and neighborhood routes to save money and fuel.

The union that represents city bus drivers praised the overhaul Tuesday. Tim Morgan, the business representative for Teamsters Local 959, said union members were excited by the changes. He said he expected it to lead to better customer service.

"Right now, the people are kind of upset when they get on the bus, because they've waited an hour," Morgan said. "This will be every 15 minutes, which is going to make a big difference."

Morgan said he assured union members that no jobs would be lost. If the approach is successful, the city may be able to expand the number of drivers, he said.

Anchorage is not the first city to reimagine its bus routes. Officials here were inspired by Houston, Texas. In Houston, the results have been mixed: After initially reporting a rise in ridership, the numbers were down in December, which officials blamed on an economic downturn and fewer people going to work.

Even so, the approach gained national attention and inspired Anchorage officials to rethink the routes here.

What remained unclear Tuesday: The plan for clearing snow and ice from Anchorage sidewalks, particularly in neighborhoods. Sidewalk snow removal is notoriously slow or nonexistent, with sidewalks used for snow storage by state and city street maintenance crews.

Asked about the sidewalk issue, Berkowitz blamed the state of Alaska. He said it would be "easier" if state-owned and managed roads, like Northern Lights and DeBarr, were plowed more quickly.

Berkowitz said the new routes were designed to ease the walking burden for likely riders.

"We want to make sure that as many people are as close to the bus system as possible," Berkowitz said. "By the numbers, this route is closest to most of the people who use the bus."

With more money, the city could expand the new network and reach more people, Berkowitz said. He pointed to his administration's attempts to gain a larger share of federal funds split with the Alaska Railroad as one potential source of transit dollars. Those efforts have so far deadlocked.

Rudolph, the transit planner, also pointed to the year of surveys and meetings, which found that Anchorage residents were overwhelmingly willing to walk further to get a bus with more frequent, direct service.

Correction: An earlier version of this story said the new airport bus ran on Route 30. It's actually Route 40.