An Anchorage political appointee navigates ownership in a pot shop 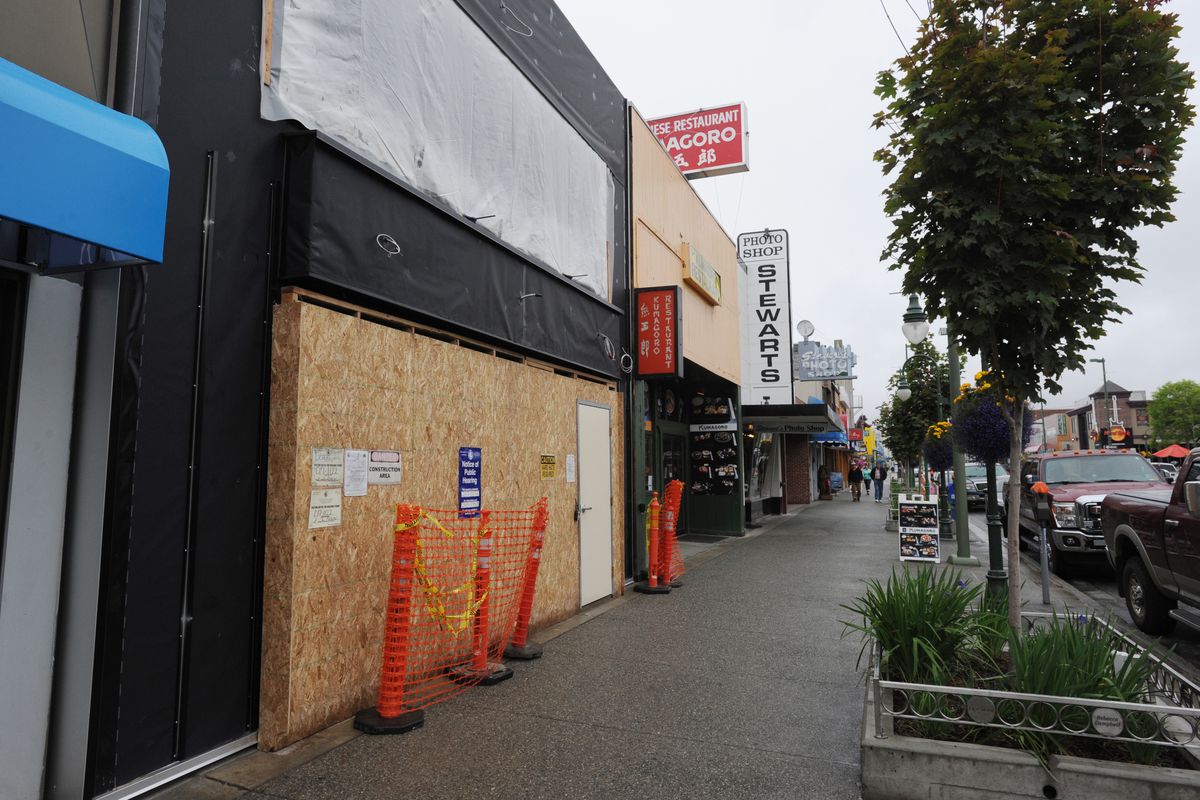 A public official's ownership stake in an under-construction marijuana business in downtown Anchorage prompted some questions about conflicts this week, though the official, Andrew Halcro, said he doesn't have any.

Great Northern Cannabis plans to open a store at 541 W. Fourth Ave., a couple of doors east of the downtown federal building in a touristy part of town. The owners include Halcro and his wife. He's the executive director of the Anchorage Community Development Authority and a political appointee of Anchorage Mayor Ethan Berkowitz.

Corporation records list Andrew Halcro and Vicky Halcro, his wife, among 23 shareholders in the business. The other part-owners include doctors, lawyers and  entrepreneurs. Former downtown Anchorage Assemblyman Patrick Flynn, who left office at his term limit in April, also owns a small interest.

But at the moment, Halcro appears to be the only current public official with a business interest in Anchorage's marijuana industry. Former Mayor Dan Sullivan's chief finance officer, Lucinda Mahoney, has a small share in Einstein Labs, which has applied for a marijuana grow license.

It's neither illegal nor unusual for public officials to own downtown businesses — Mayor Ethan Berkowitz owns a small interest in Snow City Cafe, and Sullivan has long owned a 10 percent interest in McGinley's Pub next to City Hall — but commercial marijuana is more unusual in its level of regulation locally and by the state, and the fact that it remains illegal under federal law. A federal prosecutor in Anchorage, Frank Russo with the U.S. Attorney's Office, said those federal laws are only invoked under circumstances involving a priority for the U.S. government, such as child endangerment, interstate commerce or violence.

Halcro is also the head of a government agency that manages downtown parking lots and meters and spearheads redevelopment projects, both activities linked to property values and generating more customers for downtown businesses. On its mission statement, the ACDA pledges to "deliver quality development and public parking services" to Anchorage.

In an interview, Dick Traini, the chair of the Anchorage Assembly, questioned the timing of the Great Northern Cannabis opening. Halcro's agency is about to embark on a program to enforce two-hour parking limits on the street on Saturdays. Halcro and officials with EasyPark, the development authority's parking branch, have justified the change largely by arguing that metered parking will create more customer turnover and benefit downtown businesses.

"I'm just wondering why he wants to move traffic downtown," said Traini, a Midtown representative. "Is it to help his business, or is to help other business owners down there?"

Halcro said the effort to look at enforcing Saturday parking meters predates his appointment to the agency by many years. The decision was influenced by data and other downtown merchants, he said.

"This has nothing to do with me or an interest in a downtown business," Halcro said.

Ever since voters legalized commercial pot in Alaska in 2014, Halcro said, he's thought about getting involved in the business.

But he said he didn't seriously consider it until last fall, when Flynn, then an Assemblyman, introduced him to Steve Brashear, the 47-year-old former ConocoPhillips environmental coordinator who started Great Northern Cannabis in 2015. Flynn was once Brashear's manager at Weston Solutions, an environmental firm, and the two remained friends.

Brashear said in a phone interview that he asked Flynn to be involved for his business experience.

Flynn first was listed as a part-owner in June 2016 while he was still on the Assembly, records show. He sat out on Assembly hearings for marijuana grow operation licenses in his final months on the Assembly. His colleagues ruled he had a conflict of interest because Great Northern Cannabis was setting up its own grow operation. In an interview, Flynn said he helped write the bylaws for the business as well as making his investment.

Halcro served as a legislator more than a decade ago and was the director of the Anchorage Chamber of Commerce. He ran for mayor against Berkowitz in 2015. As well as business experience, Halcro has a lot of connections, Brashear said.

Brashear said Halcro's current government job had "absolutely" nothing to do with him asking Halcro to buy in.

"Andrew was a good businessman," Brashear said. "And we were also looking to raise capital."

Halcro and his wife, Vicky, each ended up buying 1 percent shares. Both were first listed as 1.23 percent owners in a February 2017 filing with the state.

Corporate ownership with numerous shareholders isn't yet common in Alaska's new marijuana industry. Brashear said the arrangement was seen as the most viable way to raise the money to grow and sell marijuana products — banks can't make commercial loans because of federal law.

The company has invested $3.1 million so far overall, he said.

More than half of the up-front investment has gone into renovating a building at 541 W. Fourth Ave., which is set to be the new storefront. The building was purchased in November by a corporation owned by Anchorage surgeon Bret L. Mason, records show. Mason's wife, Carla Mason, is one of the shareholders in Great Northern Cannabis.

Since February, contractors have paid EasyPark $2,100 in meter hood rental fees to use nearby parking spaces for construction equipment, according to agency records. Parking fees and citations made up the vast majority of the Anchorage Community Development Authority's operating revenues in 2015.

Halcro said he has no involvement in EasyPark's meter rental operations. He also said that the city traffic engineer reviews requests for rentals.

"I'm all about economic development," Constant said. He said Halcro's 1 percent interest in the company is "not controlling by any stretch."

Reached by phone, city ombudsman Darrel Hess said he also didn't see obvious conflicts of interest. But he said Halcro might have to declare a potential conflict if the development authority acquired property on the same block.

Halcro said his only other downtown business interest is a stake in his family's business, Avis Rent-A-Car, which has been headquartered on B Street since the 1950s.

He said his public role of growing downtown coincides, but doesn't conflict, with his ownership in the pot business.

"This is a focus to grow downtown … in a way that can host the legal pot industry respectfully, making sure we abide by the rules, and (in) growing downtown as a destination," Halcro said.

Brashear said that part of the business' interest in downtown was exposure to tourists and local residents.

The third crop was harvested about three weeks ago, Brashear said. But he said it's being saved for when the new store opens on Fourth Avenue downtown.