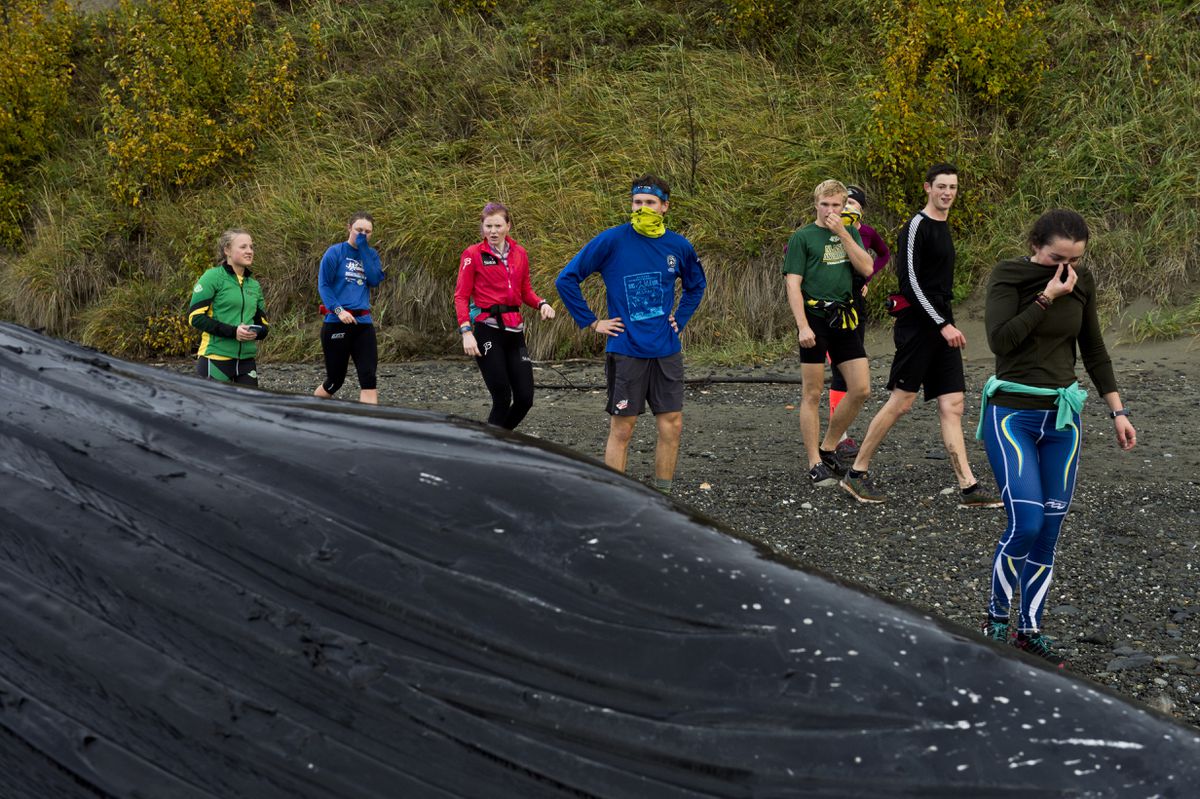 The dead humpback whale that had been floating near the Port of Anchorage last week has washed ashore at Kincaid Park, drawing groups of onlookers Monday and prompting federal officials to warn the public to stay away.

"Marine mammals can transmit disease to humans and pets, so people should stay away, and keep their pets away from this stranded whale," said Mandy Migura of the National Oceanic and Atmospheric Administration Fisheries Service.

It's still unclear what led to the humpback's death and where exactly it died, according to Barbara Mahoney, an Anchorage-based NOAA biologist.

It's uncommon for humpback whales — dead or alive — to find their way to Upper Cook Inlet, Mahoney said.

Biologists don't know whether this whale swam to Upper Cook Inlet and died or died elsewhere and the tide carried its carcass toward Anchorage.

Mahoney said NOAA got a report Saturday that the whale carcass had washed ashore at Kincaid Park's beach. Last week, the same dead whale drifted with the tide from Knik Arm to around Point MacKenzie to the Port of Anchorage area.

Mahoney said by the time the whale carcass reached Kincaid, it still had the orange buoy strapped to its flipper that a team from Joint Base Elmendorf-Richardson attached earlier in the week.

Caption
A buoy is tied to the whale’s flipper. On it is written, “This whale has been reported.” The body of a humpback whale washed ashore at Kincaid Park, which attracted some curious visitors on Monday, September 25, 2017. The dead whale was previously spotted floating in Knik Arm. (Marc Lester / Alaska Dispatch News)
Wait 1 second to continue.

She described the whale as a "sub-adult" and said she had gotten reports that it was between 25 feet and 30 feet long. It had no obvious external injuries, she said, including bruises or cuts.

"There are no signs of human interaction," she said.

NOAA planned to have a veterinarian go to the Kincaid beach this week to examine the whale and try to determine a cause of death, Mahoney said. But since the whale died at least 10 days ago, its tissues may have deteriorated by now.

On Monday morning, people walked out to the beach for an up-close look at the foul-smelling whale carcass, about 500 feet from an access trail. Some poked its tongue with rocks. Others knelt to take selfies.

One group said they drove about an hour from Palmer to look at the whale. A few others said they had heard about it on the news and wanted to see it for themselves, including Brandon Tusi, who said he has a penchant for whales.

“They get to see a lot of the world that we don’t get to see,” he said. “They’re like a mystical creature to me.”

Members of the University of Alaska Anchorage cross-country ski team also passed by the whale on their training run Monday morning.

"I think we saw maybe nine moose on our way here and now a whale, so it's been a wildlife-full morning," said Andrew Kastning, UAA Nordic coach.

By Monday, a NOAA law enforcement officer had created a perimeter around the whale carcass with yellow caution tape, the kind common at crime scenes. A sign posted by the agency said it's illegal to take parts from protected marine mammals.

Mahoney also warned people to not touch the whale, since biologists don't yet know whether an infection killed it.

"That's always our fear, people getting sick from marine mammals," she said.

Mahoney said NOAA had not established a plan by Monday about what it would do with the whale carcass.

"The tides are dropping so we don't expect it to be floating away anytime soon," she said.

Ken Marsh, a spokesman for the Alaska Department of Fish and Game, cautioned people that the whale carcass could attract bears. The department had received reports of two black bear sows with cubs in the area, he said.

"It's a potential bear smorgasbord," Marsh said. "If folks want to go down there and take a look, they probably want to bring their bear spray."

Last July, the carcass of a 42-foot humpback whale originally discovered along Turnagain Arm near Hope also washed ashore at Kincaid Park, but closer to the motocross area.

The whale bones were eventually flown to the University of Alaska Fairbanks for research. A cause of death was never determined, Mahoney said.

"They like the marine fish in marine waters," she said. "Upper Cook Inlet doesn't tend to be their range."

Marc Lester contributed to this report.