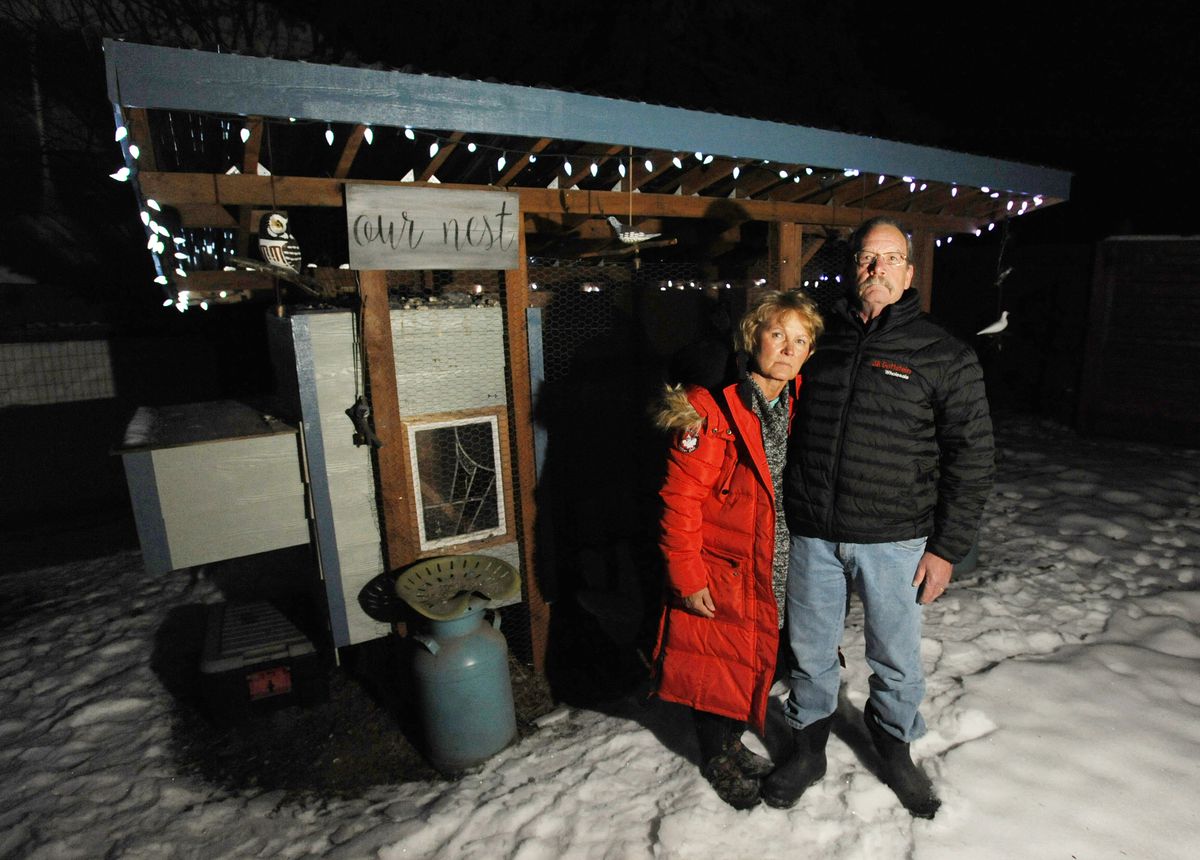 Debra and Dan Dailey with their empty chicken coop in the backyard of their Jewel Lake home on Jan. 22. (Bill Roth / ADN)

Debra and Dan Dailey with their empty chicken coop in the backyard of their Jewel Lake home on Jan. 22. (Bill Roth / ADN)

A clash between West Anchorage neighbors over the clucking of backyard hens has led city officials to re-examine local laws about harassment and animal noise.

Dan and Debra Dailey were fined $150 in October after Paul Prokopowich, who lives next door, complained the Daileys' hens were disturbing him and keeping him awake.

The complaint capped several years of tension between Prokopowich and his neighbors over surveillance cameras, bright lights and dogs, records indicate. But the hens elevated the drama from the quiet street in Jewel Lake into the courts, and to the attention of elected officials.

It's an example of how neighborhood fights can escalate. But Prokopowich's noise complaint also revealed an unexpected problem with city law. Since 2011, Anchorage has allowed small flocks of hens to be kept as backyard pets on most residential lots, though roosters aren't allowed. Backyard hens have risen exponentially in popularity, driven in part by demand for fresh eggs and trends in urban gardening.

At the same time, the city bans "chronic animal noise," defined simply as animal vocalization for more than five consecutive minutes. There's no decibel level. The noise does not have to be shown to unreasonably disturb a person, and negligence does not have to be proved, according to an administrative hearing report.

Under the law, chicken owners are exposed to fines "due to the simple fact that chickens by nature cluck," wrote Lisa Toussaint, the administrative hearing officer in the Daileys' case.

In April 2016, the Daileys built a coop in their backyard. They ordered six chicks: Iris, Pepper, Sparky, Sunny, Goldie and Little Bit.

In a statement in September, Prokopowich wrote that the chickens had been "screeching all day long for months, causing him to awaken from a dead sleep."

He said the noise stopped him from napping during the day, even with his windows closed.

"I can't begin to describe what it has taken to endure this constant torture and disruption in my life," Prokopowich wrote, adding the noise "has affected my life so negatively that I've been forced to spend time and money to stop it."

Prokopowich said he'd reported the Daileys to Animal Control before, including four complaints about the hens since May. To document his case, Prokopowich mounted a surveillance camera nearly 15 feet away from the chicken coop. He later gave several recordings to animal control officials.

Property records show Prokopowich has owned his house since 1999. A phone number listed for Prokopowich was disconnected and he did not respond to an email. Access to the front door was blocked by what appeared to be an electric fence.

His attorney, Ryan Stuart, did not respond to a phone call.

The Daileys moved to the neighborhood in 2014. Debra Dailey runs a massage therapy business from their home and Dan Dailey works as a rural sales manager for J.B. Gottstein, a division of Albertsons and Safeway.

The Daileys say they have never had a conversation with Prokopowich outside City Hall hearing rooms and their neighbor's behavior amounts to harassment. According to Dan Dailey, Prokopowich reported him to environmental officials for smoking a cigar in his front yard and for steam coming out of a dryer vent. Prokopowich also called Animal Control when the Daileys' dog, a Lhasa Apso named Maddy, accompanied Dan Dailey to the mailbox without a leash, Dailey said. Four other dog-related complaints from Prokopowich were dismissed, according to Touissant's ruling.

In August, the Daileys got a form letter from Animal Control, Dan Dailey said, referencing a noise complaint and methods to control barking dogs.

Dan Dailey called Animal Control. He told the officer his dog didn't bark. Soon the officer realized that the complaint was about his chickens, he said.

"I can't teach them not to cluck," Dailey said in an interview last week. "It's not a dog."

Hens can be loud, said Steve Brown, an extension agent for the University of Alaska Fairbanks Cooperative Extension office in Palmer.

"For some people, the sound of hens doing what they do is a great atmosphere, and they love it," Brown said. "For other people, it's like the biggest nuisance on the planet."

Hens cluck to express themselves, Brown said. A flustered hen can stir up a commotion. Over the phone, Brown did his best imitation: "Bock, bock, BEGOWWWK!"

Brown runs a chicken education program called "Chicken University" that stresses being a good neighbor. Before investing in chickens, Brown said, residents should contact neighbors to ask how they feel about having the animals next door.

Debra Dailey said she and her husband almost didn't bother with chickens because of their history with their neighbor. But after speaking with an Animal Control officer, she said, she thought there wouldn't be a problem.

On Oct. 25, in a small conference room on the fifth floor of Anchorage City Hall, the neighbors attended a hearing tell their sides of the story.

Prokopowich said the noise had been happening for months before he installed his surveillance camera, though he apparently did not allow an Animal Control officer inside his house to corroborate his claims, according to Touissant's notes on the hearing. He said he didn't talk to the Daileys about the hens, adding he felt it would have been a waste of time.

Dan Dailey defended himself. He said hens are social animals that communicate by clucking, especially when they're laying. That typically happens between 10 a.m. and 2 p.m., the time frame when Prokopowich complained about noise, Dailey said. He also installed a plyboard in the coop to try to deflect noise.

Two neighbors also wrote statements saying they had no noise problems with the Daileys. The neighbors said Prokopowich was the one who was disruptive by doing metal work late at night, turning lights on at all hours and hitting his car alarm repeatedly. During the hearing, Prokopowich denied the incidents happened.

In the end, the administrative hearing officer, Toussaint, upheld the fine. But she wrote in her ruling that city law appears to be in conflict, and questioned whether Prokopowich could have been woken by the clucking from his bedroom with his windows closed, since the chickens were at least 30 feet away.

"The cluckings on the recordings strike me as typical chicken sounds," Toussaint wrote.

The city's ombudsman, Darrel Hess, who once worked with Dan Dailey at Carrs-Safeway, contacted Anchorage Assembly members about the case and said the law should be clarified. He said the law isn't written so "unreasonable persons" can "bludgeon the quality of life out of their neighbors."

Assemblyman Eric Croft, who represents West Anchorage, has since toured the Daileys' property. He said he is also examining law changes around harassment and chicken noise.

In October, around the same time as the hearing, the Daileys and two other neighbors also sued Prokopowich for invasion of privacy. The complaint cites an "array of video cameras, microphones and bright lights" erected around the perimeter of Prokopowich's property, and light poles directing light onto their properties.

A lawyer for the Daileys, Paul Cossman, said the two sides are trying to negotiate a settlement.

Now, though, there's an empty coop in the Daileys' backyard. Around Thanksgiving, not wanting more fines, the Daileys gave the hens to Animal Control for adoption. They don't know where the flock ended up.

"I always have to envision that they're in the Valley, where nobody is ever going to harass them again," Debra Dailey said.