Propane tanks are a favorite target for thieves camping in city woods. This former Anchorage judge is fed up. 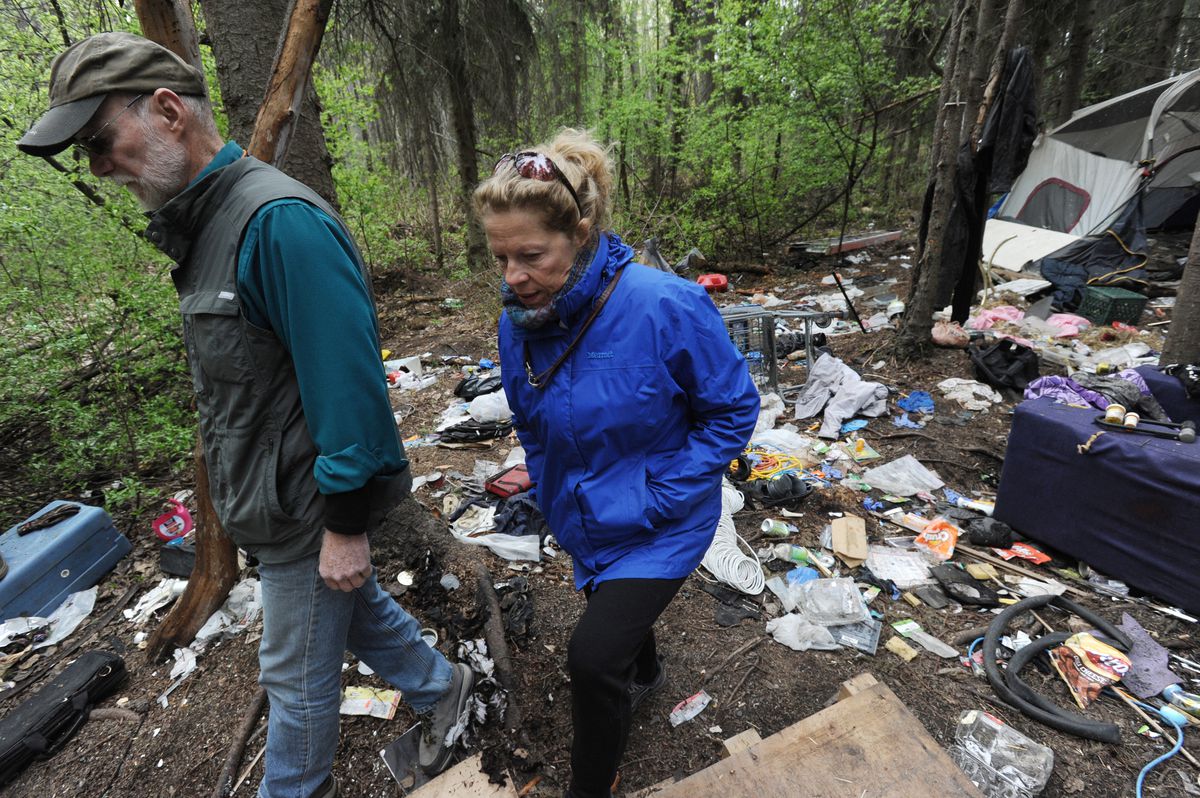 Russ Webb and Stephanie Rhoades pass through a homeless camp along the Chester Creek Trail in Anchorage on May 15.  (Bill Roth / ADN)

Russ Webb and Stephanie Rhoades pass through a homeless camp along the Chester Creek Trail in Anchorage on May 15.  (Bill Roth / ADN)

With summer coming, you might add another backyard ritual to your barbecue: locking down the propane tank so it won't be swiped.

The tanks, and other household items often reported as stolen on social media, are ending up in illegal homeless camps, according to people who monitor camps along the Chester Creek bike path.

Stephanie Rhoades, a retired Alaska judge and founder of the Anchorage wellness court, says the tanks help support a "lawless" population of long-term campers who raid neighborhoods for items to sell or to trade for drugs.

The tanks, for making heat and warm meals, add to fire hazards that already exist with fire pits, she said.

She said the city hasn't been able to stop the camps, but a police official said new steps will be taken this summer to remove and clean them up.

"I think we'll get more picked up this summer than we've ever gotten picked up," said Lt. Jack Carson, head of the Community Action Policing team.

Rhoades has visited the woods near Sullivan Arena for years, telling homeless individuals how they can get help. These aren't the same involuntarily homeless people she used to see at the courthouse, said Rhoades, who founded the Anchorage Mental Health Court in 1997 to get treatment for people with mental disabilities.

The camps were smaller a decade ago, she said. "And people were not stealing and pilfering everything around them to make their living."

On Tuesday, Rhoades gave two Anchorage Daily News journalists a tour of campsites between the Valley of the Moon and Rogers Park neighborhoods. Her husband, Russ Webb, former deputy commissioner of health and social services, came along.

The couple documents the camps to give municipal officials an idea of the problem. Webb believes at least 50 campsites occupy about a half-mile stretch of trail.

"No one has more sympathy for the homeless than us," Webb said. "But these people are not disabled. They are industrious, bringing all this stuff to their site."

On Tuesday, people who often appeared to be in their 30s or younger could be seen coming and going from the forest. Mini-villages of jumbo tents and tarp-huts lined the woods.

Some people carried bicycle rims or armfuls of tires. Others wheeled carts.

"There's a chop shop," Rhoades said, gesturing toward a line of some 10 bikes in various stages of assembly.

Two women there refused to have their photos taken. "What is the point of this?" one asked, before walking off.

A sign along the bike path says camping and fire-building are illegal.

Nearby, Tony Azares, 55, poked his head from beneath a tarp. Mounds of items were piled outside his dwelling, including a Dell computer screen. Azares said he collects stuff to clean up the area.

He said he's lived there at least six months. "This is home."

The cream-colored propane tanks were a fixture at every camp, tossed on heaps of trash or set outside tents, including one pile of six.

Anchorage Assembly member Chris Constant said he had four tanks stolen from his downtown yard one night last winter. Other neighbors did too, except for one man who locked his tank with a chain.

The tanks can cause explosions or fire, but the city has struggled to keep them out of homeless camps, he said.

"It's a problem we on the Assembly go back and forth on," he said.

In December 2014, the Anchorage Fire Department responded to a fire at a homeless camp in the Chester Creek greenbelt after propane explosions set the camp and surrounding trees ablaze.

And other major fires have been attributed to homeless camps, including a 2008 blaze that tore through 10 acres of the Campbell Creek greenbelt.

Jodie Hettrick, deputy chief for the Anchorage Fire Department, said the department doesn't have the staff or time to walk the campsites looking for tanks or other possible hazards.

But it responds quickly to reports of fire, and notifies police of any illegal activity, including camping.

The department responded to 123 reports of fire at homeless camps in 2017, three times higher than in 2013. About 95 percent of those were "contained to a campfire-sized area," she said.

The department doesn't have information on how many of those fires were caused by propane tanks. But it's "very rare," she said.

Carson said the lack of space in shelters, and a 10-day eviction-posting requirement, has created a logistical problem for removing the camps. With no shelter, campers move to a new area, angering the next neighborhood.

But shelter space is expected to open up soon, and police will begin removing camps, he said. The police department is working with the parks department, which has received more resources for cleanups.

"We're coming up with a roadmap on what areas to clean, and in what order," he said.

On Tuesday off the Chester Creek Trail, a man in sunglasses sat in a folding lawn chair near a tent. He said his name was Kenny and gave his age as, "40s."

He puffed on a vape pipe. The scent of burning wood and marijuana wafted by.

Kenny said theft isn't justified. But stealing a propane tank might be.

"If it's really freezing, you would grab that bottle," he said.